Not long ago, Ryan McDermott decided to spend part of his Saturday afternoon watching some college football. Well, not just watching. 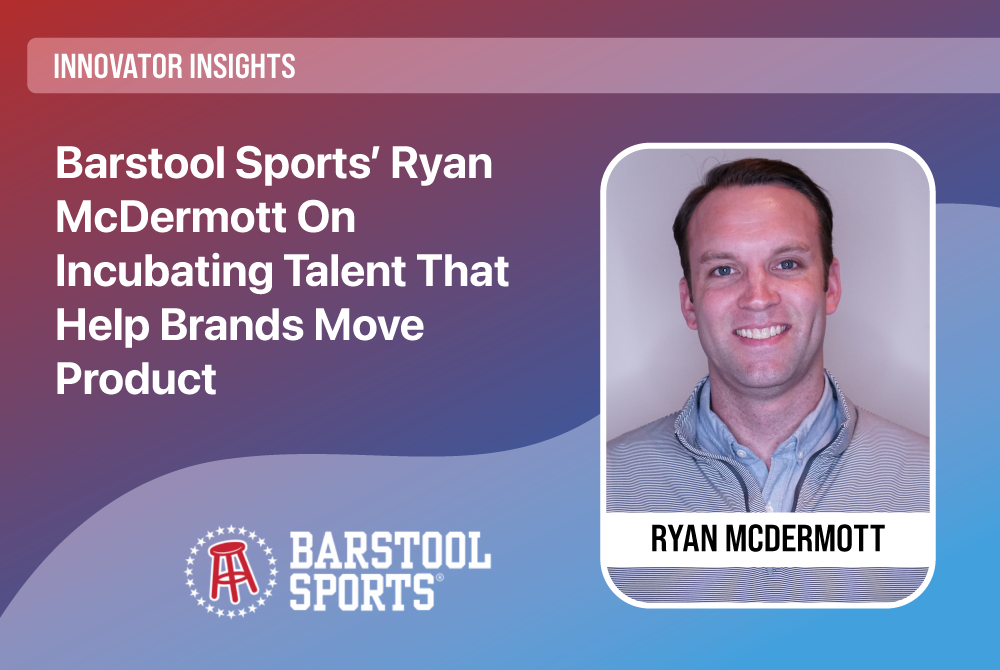 Not long ago, Ryan McDermott decided to spend part of his Saturday afternoon watching some college football. Well, not just watching.

“I can't just sit in silence and just watch a game,” McDermott told Brand Innovators, suggesting that millennials and other young consumers like him are much the same. “Fans want to tune in to our talent because they care about what they have to say. They want to see if they agree, or they want to see a tape of a funny moment that happened in a game.”

By incubating talent that can capture key cultural moments, McDermott said Barstool Sports hasn’t just evolved from a newspaper into a multi-platform content house. It has also become a marketing engine that can effectively help revenue-conscious brands move product. That’s because the company doesn’t just passively cover the sports and lifestyle sector, but has become a collection of trusted and popular authorities within those sectors.

“Our fans are the Stoolies, and they look at Barstool like a sports team,” he said. “When we tell them to watch something, or whatever we tell them to buy, they end up doing it. Blue-chip brands are still interested in reach, but what they really want is purchase intent, and that’s what we do by creating conversations. We’re big needle-movers.”

At its recent Upfront, Barstool Sports – which celebrates its 20th anniversary this year – announced new shows including a podcast featuring Los Angeles Lakers guard Patrick Beverley and Crush or Cash, which will intertwine challenges involving love and money. New reality shows include competitions such as Barstool’s Elite AthElite, Briality House and Dozen Xtreme.

“It's not lost on me that we are in the middle of a recession and that every dollar is being watched like a hawk,” McDermott said. “The way I look at it, if you were to take one NFL Sunday spot and placed that money on a buy with Barstool, we would over deliver not only on just impressions, but actually create a buzz that gets you consideration to buy. I think that's probably the most important metric that marketers are looking at right now.”

McDermott’s other advice for connecting with young, affluent consumers includes:

Explore The Possibilities Between Talent And Brand Experiences

Barstool can offer all the traditional ad formats you’d expect from a large publisher, but McDermott said some of the best results have come from connecting personalities to brands in unexpected ways.

A good example is Chevy, which sponsored its podcast Pardon My Take. The hosts suggested listeners go to dealerships and mention the show to get a free tank of gas. It worked – there were scores of social media posts of grateful consumers talking about checking out the Silverado after getting their tanks filled.

“We're not just going to do a one-off thing where it just doesn't make sense or we just randomly show up,” McDermott said. But if you're integrating into a bunch of different content that we're doing, our talent will get behind it in a much bigger way.”

Sports Is Just One Way To Market Against Consumers’ Interests

A show that chronicles what life is like post-college. Another show that talks about sex and lifestyle for Millennial and Gen Z girls. Recaps of hits like the Bachelor. None of them scream “sports,” but they’re all on Barstool. McDermott said that’s because the company has recognized its audience is made up of people who aren’t just young men, and whose appetite for content stretches across a variety of subject matter.

Brands who have only advertised on sponsored content associated with sports should look at all their options, McDermott added.

“We have 130 Different brands We have 65 different personalities and 17 different content verticals across sports, entertainment, pop culture lifestyle. If you're really not trying to hit a sports fan, great, I have a franchise – or multiple franchises – that will work for you.”

Fandom Is Never Fixed, So Partner With Change Agents

Even the biggest fires tend to start off with just a few sparks, McDermott said. The same is true of the content that may become a key franchise within Barstool Sports. He said marketers who have invested in more than one of its shows have often seen a greater return on their investments.

“Our personalities are here to experiment and test content,” he said. “They keep creating, whether that's blogging, podcasting or creating a social video series. When they find that fandom, Barstool is going to get behind it and cross-promote it on a lot of our different shows, which means you find more of those fans within other audiences. It adds fuel to the fire, which is why it’s good for a brand if you get in early.”