Meridith Miller, Ampersand’s Vice President of Marketing, doesn’t just believe the time for audience-driven TV campaigns has arrived — she and her team at Ampersand believe the time has come to let marketers take a more hands-on approach to developing them. Brand Innovators caught up with Miller to discuss why. 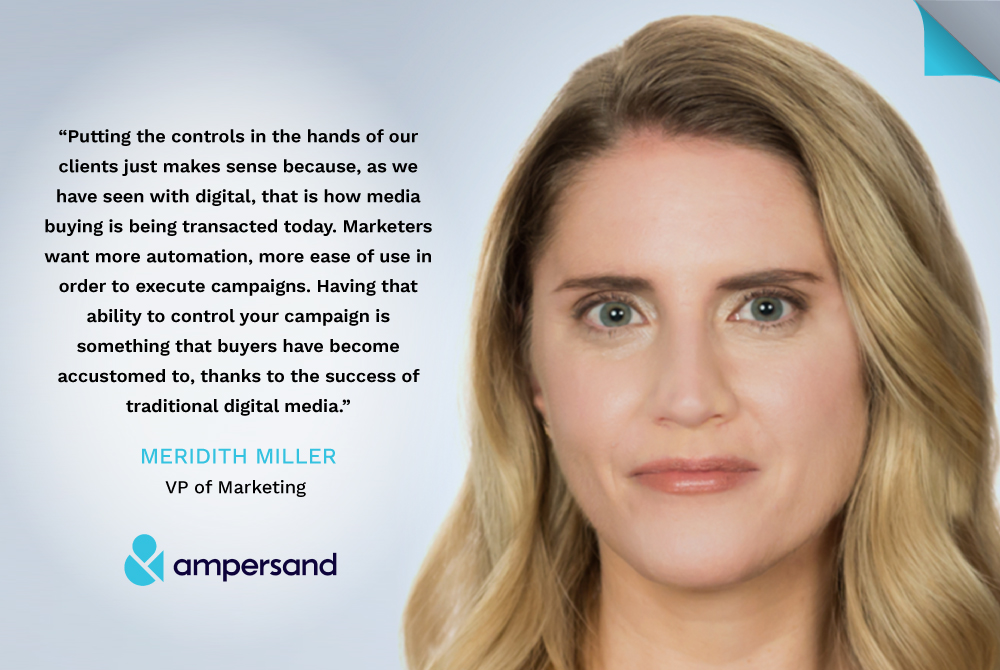 Meridith Miller doesn’t just believe the time for audience-driven TV campaigns has arrived — she and her team at Ampersand believe the time has come to let marketers take a more hands-on approach to developing them.

Back in January, the New York-based joint ad sales venture owned by Comcast, Cox and Charter launched the AND Platform as a managed service. The idea was to offer brands audience-based plans for television ad buys beyond age and gender coupled with Ampersand’s viewership insights from nearly 40 million households, and more granular reporting on reach and frequency and outcomes.

Two months ago, Ampersand took things up a notch by introducing a beta offering of a self-serve version of the AND platform. That means the buy-side  can now build their own audience based plans to directly manage their television buys the same way they might handle digital campaigns. In addition, clients also have access to always on reach and frequency reporting at the audience segment and market level.

“The self-serve plan was there from day one,” Miller, Ampersand’s Vice President of Marketing, told Brand Innovators. “Putting the controls in the hands of our clients just makes sense because, as we have seen with digital, that is how media buying is being transacted today. Marketers want more automation, more ease of use in order to execute campaigns. Having that ability to control your campaign is something that buyers have become accustomed to, thanks to the success of traditional digital media.”

From NCC To Ampersand

While the self-serve version of the AND platform could transform the TV sector, it also marks a milestone in Ampersand’s own transformation since it rebranded just over a year ago. Originally known as NCC Media, Ampersand announced its name change at Advertising Week 2019 to better reflect its mission of unifying the TV ecosystem. This included bringing together what was a highly fragmented cable market, and even firms that would normally be considered competitors, she noted.

“The rebrand was really intended as our first real loud signal to the marketplace that we’re doing this together,” Miller explained. “It wasn’t a move we took lightly, and a rebrand is not something that happens overnight, but it has allowed us to bring a more modern look, feel and tone to how we operate and what we offer.”

How Technology Improves Targeting In TV

TV has sometimes had a reputation as being inherently less precise or data-driven as other channels in the marketing mix, but Miller suggested brands need to take a closer look at the technologies and tools available to them. This is particularly important given shifts in consumer behavior.

“Now there’s this new fragmented landscape within TV, which is around the viewing choices that audiences have. They can choose when and where and what they watch,” she said. “The control is no longer in the hands of the programmers and content creators. It’s more challenging than ever before for  advertisers to reach a desired audience on television.”

Brands who take a more data-driven approach to TV buys quickly realize they have options, however, the local level, Miller believes  advertisers are better able to define their target audiences using their own first-party data if they have it, or by choosing from audience segments built with data provided by Experian, Polk and other partners.

“They can go well beyond traditional top 50, expanding into networks they wouldn’t have otherwise considered a high priority in terms of the audience that they were trying to reach,” she said. “On the back end, a platform like ours can let them go a couple of layers deeper than what they are used to getting from a reach and frequency standpoint.”

On the national side, Miller said Ampersand clients are turning data into insights that show them where they might have under-delivered an audience in a campaign to allow for supplemental television advertising campaigns. That allows them to iterate and improve with their next campaign purchase.

Acting on those insights also puts brands in a better position to pivot and make changes when the unexpected arises. When the pandemic struck, for example, brands that might have normally created a plan to advertise around live sports suddenly found themselves with entire seasons being postponed or cancelled.

“When you make better use of data insights to inform your campaigns, you’re able to identify where else those viewers are consuming content, and advertise in a different way,” she said. “In some respects, the challenges the TV industry is facing is making the AND Platform more relevant than ever.”