All it took was a single conversation with her late husband for Maria Twena to change the entire trajectory of her career, and her sense of purpose as a marketing leader. 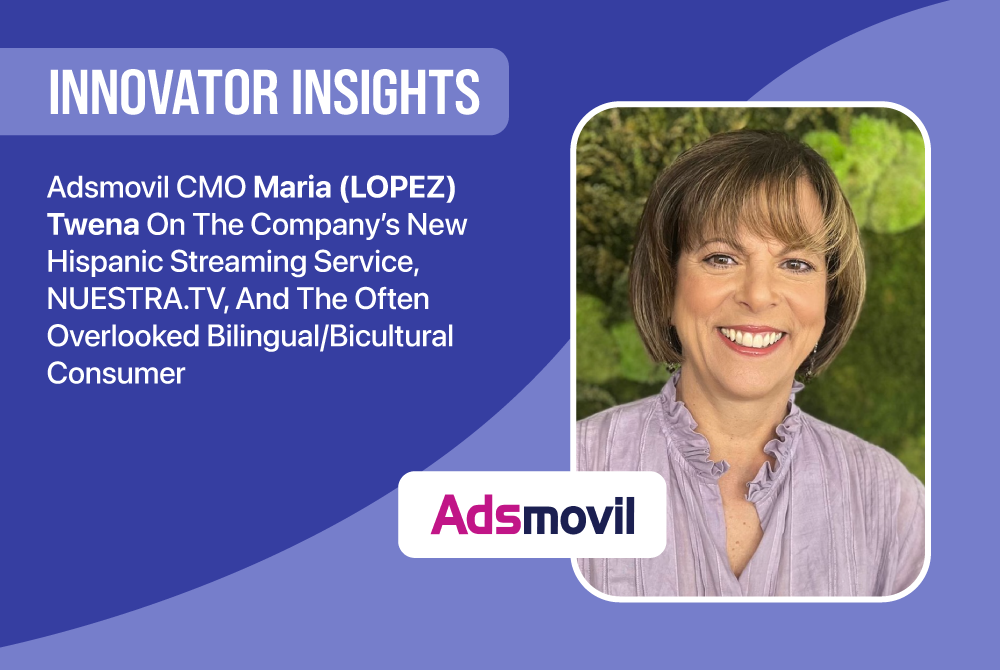 All it took was a single conversation with her late husband for Maria Twena to change the entire trajectory of her career, and her sense of purpose as a marketing leader.

It was about 15 years ago and Twena had come home and was putting away the groceries. Her husband remarked that she never seemed to buy the same brand twice. It was true, but it was also something Twena hadn’t considered before. She asked her husband what had prompted him to notice, and he said he had read a study that showed Hispanics tend to be brand loyal

As the CMO of Adsmovil, Twena is now helping countless brands understand how to talk about — and talk to — the bilingual/ community to which she’s belonged her entire life.

“I'm certainly not Marcia Brady from The Brady Bunch, but I'm definitely not Veronica the damsel in distress in the Univision telenovela, either. I’m smack in the middle, and I'm nowhere to be seen. No one ever reflects back my reality.”

That all changes this month, when Adsmovil will introduce a streaming app, Nuestra.TV, which means “Our TV” in Spanish. Based on an approach Twena describes as “created by the bilingual for the bilingual,” the app will feature Spanish content with English subtitles, and vice-versa. This will allow an “abuela” (or grandma) to watch programming with her daughter, for instance and support co-viewing which is prevalent in the Hispanic market.

“There’s a whole cohort that has been lost in this shuffle of Spanish language and then the general market,” she says. “We have a huge hole when it comes to content for them.”

Twena had plenty of advice for her fellow CMOs on ensuing bilingual/bicultural consumers are woven into their marketing strategies:

“What typically happens with brands is they have a multicultural budget and a general market budget,” she says. “Within that bucket when they target Hispanics, the easiest thing to do is to separate the cohort by language. So if I'm only doing Spanish language advertising, I get credit for DEI efforts because I'm targeting the Hispanic market.”

The issue is that means a brand might be resonating with 28% of its addressable market, which is the Spanish Dominant segment, but more offten than not, missing the bilingual/bicultural segment. According to Twena, these represent 55% of the market and tend to be highly influential.

“Many brands are fearful of the bilingual/bicultural group, because they don't know how to market to them,” she said. “Brands want  to believe that the bilingua/bicultural are being reached with their general market ads or Spanish only ads. They  might indeed be reached, but they aren’t being touched. And to drive an emotional brand connection and resonance, brands need to touch their consumers.”

The Evolution Of ‘Sherpas’ Needs To Be Studied Carefully

Twena talks about the notion of “Sherpas” — the fact that children of immigrants, for example, often play a role in helping their parents overcome language barriers and even make purchases. (She tells a great story about encountering a Polish-American “sherpa” who bought a car on behalf of his father at the age of 10.).

Brands should not only develop ad creative that reflects those kinds of consumers but take into account how their needs are changing. For example, while many first generation Hispanic households never talked about finances because they didn’t have the means or acumen, she says the adult Sherpas are hungry for solutions that help them manage their household incomes more strategically. This is why Nuestra.TV is not just entertainment, we want to educate and inspire the community as well.

“What I'm seeing is the Sherpas evolving in very specific areas to close the gap where it hadn't been closed in the previous generation,” she says.

Dig Deeper Into The Demographics To Assess LTV Of Hispanic Influencers

If you look at the median age of the Hispanic market, across the board, Twena points out, it's 30. But if you look at the median age of those who are U.S.-born, it’s 19 . CMOs should mull those numbers carefully as they determine the lifetime value (LTV) of bilingual/bicultural consumers.  In the case of Hispanics, these consumers are young, highly influential and their sphere of influence becomes culturally agnostic as they mature, so their own reach is extensive. Enlisting this group to co-brand for you is paramount.

“If you're not focused on the ones that were born here (Generation 2.0) or on those that came to the U.S. at the age of ten or younger (Generation 1.5), you are missing out on over half of the market— and the influencers. You're negatively impacting growth, acquisition and advocacy.” she says. So the risk is, you lose a huge segment of the market by not marketing to the folks that are consumers themselves, but who also influence other purchases.”

Nuestra.TV takes into account all of these consumer insights to better serve the community here in the U.S. It was created for la familia, and is customized for each member. Our deep discernment of the total Hispanic market, across generations and languages, and our experience with these segments, has greatly informed our free, on-demand streaming solution, Nuestra.TV.