Marty Berman, vice-president of Sales US and LATAM at New York-based Admix, has a simple thought experiment that could help almost any marketer recognize the in-play opportunity in front of them: Picture yourself at a sporting event. 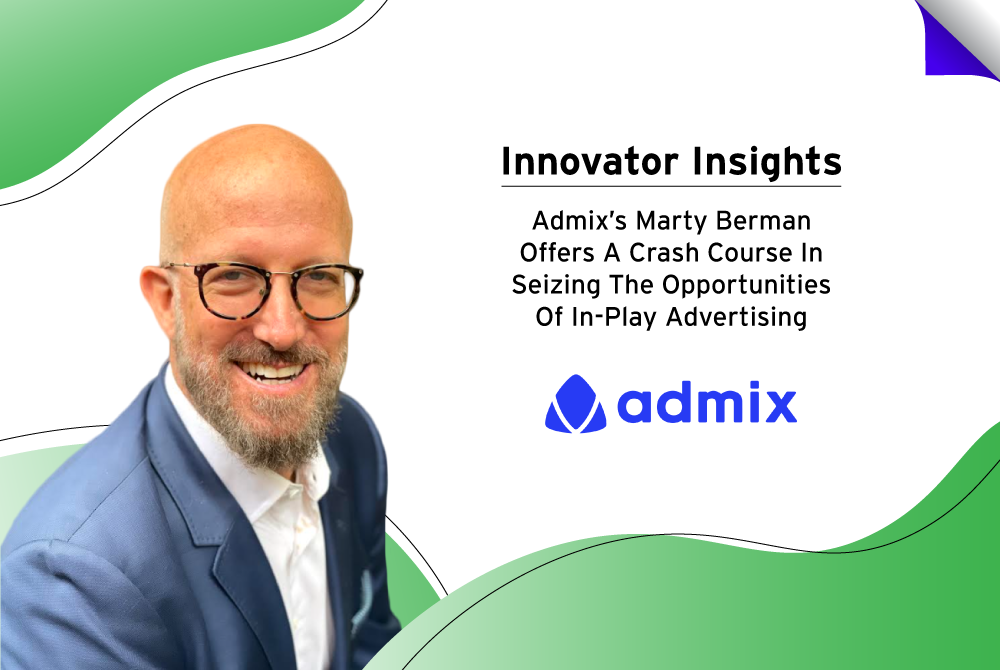 Marty Berman has a simple thought experiment that could help almost any marketer recognize the in-play opportunity in front of them:

Picture yourself at a sporting event. It could be baseball, football, almost anything. Most likely you’re picturing what’s happening with the teams on the field. But the vice-president of Sales US and LATAM at New York-based Admix suggests thinking about what surrounds the action: the logos above the bleachers, the videos flashing on the walls and other subtle but visible ways brands make themselves part of the event.

The same kinds of creative elements are now available to marketers within video game experiences through Admix’s in-play advertising platform. For Berman — who joined the company earlier this month following stints at InMobi, Integrate Marketing and NBC Internet, among other firms — his new role is as much about educating CMOs and agencies as it is closing deals.

“This is a non-disruptive way to insert a brand into a consumer’s playing experience,” Berman told Brand Innovators in a recent interview. “We’re at a tipping point with the deprecation of the third-party cookie, where marketers are looking for opportunities to reach consumers in an organic, authentic way that is going to provide them with an audience that typically has been hard to reach. In-play can give them that.”

What some marketers may not realize, for instance, is that in-play advertising is brand-safe and can be used programmatically at scale with IAB-standard units, Berman said. That means it’s easy to execute quickly with any of the major demand-side providers (DSPs).

The other area where misconceptions may be getting in the way is that gamers are young, low-income males, or limited to high-end environments such as Fortnite. Berman noted that in-play is ripe for use across everything from first-person shooters to casual mobile gaming.

“Currently consumers are spending just as much time within gaming as they are within social media, but the difference between the advertising spend on in-play versus social is a huge gap,” he said. “You can get in now and really reach this audience in a way that is not overdone from an advertising perspective and be where your competitors aren’t.”

Berman offered some more advice on where in-play advertising may be under-utilized, and how to gain traction quickly:

Leverage The Expertise From Across The Gaming Ecosystem

One of the benefits of in-play is in how it allows developers and publishers the flexibility  to put creative organically wherever they feel will be the right moment for fans to absorb it, without interrupting their enjoyment of the game.

“It allows for much more native experience from that perspective. There are so many different ways it could be done,” Berman said. “Publishers understand where they want to leverage the time spent and how gamers are moving within the game to take advantage of those moments. So rather than try to force a square peg in a round role, be sure to involve publishers as a partner.”

Be Ever-Present, Rather Than A Pop-Up Advertiser‍

Brands and their agencies are often focused on specific campaigns, and in-play can certainly deliver them results, Berman said. However the bigger opportunity is to treat it not unlike the way major sponsors align themselves with a particular sport, league or team.

“You’re not going to sponsor the Chicago Cubs for one season and assume it’s going to do everything for you,” he said. “Think about involving yourself over a longer period to show your audience in an authentic way that you support their passion. That’s what it boils down to.”

Understand The Indirect Payoff of In-Play

Although in-play could be viable for any vertical market, Berman said he foresees increased participation from those in financial services, beverages, QSR, consumer packaged goods and more.

Part of the mind-shift that may need to happen is that those in CPG, QSR or beverages, for instance, aren’t necessarily going to be driving conversions through in-play ads to have consumers buy their products directly. Instead, their spend can drive increased awareness during important shopping times before consumers head to the grocery store.

The ability to influence purchase behavior is huge,” he said. “It’s an opportunity that brands haven't been able to explore and really advertise in because it wasn’t available until a platform like Admix’s came along. Any time you’re involved at this tipping point with a new channel, that’s exciting, and that’s why I want to be a part of it.”