Professional sports have always been dominated by men. Whether it’s the athletes themselves, the professional leagues, the management teams or the people involved in sports marketing, few women were in prominent roles until relatively recently. But that’s changing as women athletes and leagues like the WNBA, along with women in marketing, have increasingly high-profile roles. 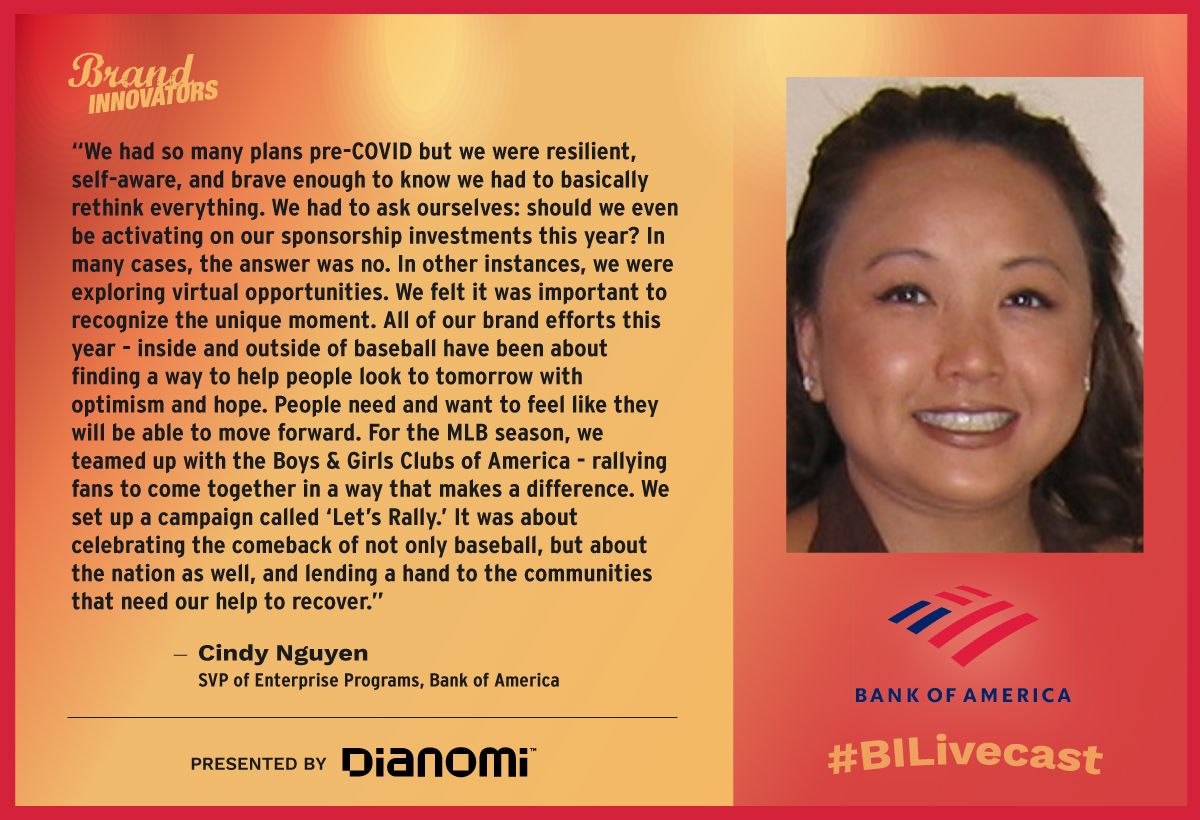 Professional sports have always been dominated by men. Whether it’s the athletes themselves, the professional leagues, the management teams or the people involved in sports marketing, few women were in prominent roles until relatively recently. But that’s changing as women athletes and leagues like the WNBA, along with women in marketing, have increasingly high-profile roles.

“I do think that there is an awareness that sometimes I'm the only woman in the room in meetings,” said Amy Azzi, T-Mobile’s senior director of sports marketing and sponsorships, at Brand Innovators’ Women In Sports Marketing Livecast on Oct. 1. “There are times where you’re the only woman and there's a toughness - an armor that you feel that you might have to put on... to almost compensate for that, but I also feel like there's so much evolution in this industry that women pride themselves on being leaders in this industry.”

The sports world has been facing unique challenges as live events have been severely restricted — or in some cases, canceled altogether. Though some major sports leagues like the NBA have returned to playing, marketers have been forced to rethink how they show up around sports when nearly all fans are watching from their homes. Brands are also increasingly putting more effort and money toward esports, which while inherently virtual, still requires some pivots amid COVID-19.

“We had so many plans pre-COVID but we were resilient, self-aware, and brave enough to know we had to basically rethink everything,” said Cindy Nguyen, SVP of enterprise programs at Bank of America. “We had to ask ourselves: should we even be activating on our sponsorship investments this year? In many cases, the answer was no. In other instances, we were exploring virtual opportunities. We felt it was important to recognize the unique moment.”

Below are six takeaways from the Women In Sport Marketing event with insights ranging from how brands are approaching sports in a virtual landscape to becoming a more diverse industry to platforms that help grow audiences in sports marketing.

Experiential marketing has been redefined by the current climate. Though Christina Hull, Head Of Experiential Marketing at Verizon, has “experiential” in her job title, she’s been spending the better part of the past seven months incorporate another “e” word into Verizon’s approach to sports marketing and sponsorships. “Another terminology that has come around is engagement marketing,” she said. “It's this moment in time in marketing where consumers really get to engage with the brand. For me, the experience really has to be impactful enough that consumers or fans will want to interact with the brand whether they’re at a live event or now in a virtual setting and really be able to take something away from it – to really get an action that stems from that engaging experience. It was always an important mix. It’s that moment of true engagement – when the consumers get to know your brand, they understand what your brand is representing and selling. You don’t get that as much from a TV ad or a billboard – it's truly a one-on-one with the consumer.”

Be a brand steward. When Gabrielle Dow, Vice President, Marketing & Fan Engagement for the Green Bay Packers first joined the Wisconsin NFL team in 2014, the concept of brand stewardship was still relatively new to her. “It took me a year to really understand because it is more than just a value - it's a belief, it's a brand, it’s almost like a religion,” she said. “Not only do I steward the brand but everyone stewards the brand, and it's something that everyone believes in. When you look at the history of the brand, the length of the team and then you take stewardship and you realize how the Packers started in 1919 as a small team in a small town – that David vs. Goliath mentality has stayed with this team since day one and it has become a fan favorite so you know the small team with no owner, with no bank account could win 13 championships. I’m not patting myself on the back, I'm patting the team and the brand on the back because the people that believe in that have built that foundation and built the character of the Packers.”

Brands need to go beyond including women in sports and include more people of color. “With everything going on in the world today, diversity and additional perspectives are just so important to how we show up,” said T-Mobile’s Azzi. “From a social justice standpoint, it's incredibly important. We have a long way to go, but it's great to see there's more coming.”

YouTube and Discord help sports and esports leagues grow their audiences, and brands should take note. “Nothing replicates a live, in-arena event, especially in the sports and entertainment world. Being in person, being a part of that culture and that energy, it’s unlike anything else,” said Kristin Connelly, senior director of marketing strategy & operations for Activision Blizzard’s Overwatch & Call of Duty Leagues. “We’re fortunate though, particularly in this challenging year, that we’re able to fully function because our fans are digital first, and we’re streaming on YouTube Gaming now. Through all of the COVID challenges, we’re still having our seasons completely intact this year. Our communities have found really innovative ways to stay connected throughout the world, really at all hours of the day and night. Discord is the main social channel for our fans, and it was so cool to see our fans create their own channels to have viewing parties. To see how the fans have embraced these communities online has been really special.”

Representation matters. “In sports, it’s hard not to notice that you’re one of the very few females in the room,” said Cindy Nguyen, SVP of Enterprise Programs at Bank of America.  “But over the years, I almost forgot. It became normal to me. It’s important that women in sports and in leadership positions, there’s room to grow. We need to pave the way for women that want to be in sports, whether it’s off the field or on the field.” For Nguyen, that includes saying yes and being open to any strategic opportunities that come your way. “In all candor, my career trajectory, I’ve never been able to plan it. Remain curious – if you’ve got opportunities to network with people doing sports marketing, that’s always the move. When and if you get the chance, take the opportunity.”

Let your athlete partners be part of the message. “One of the best things to come out of all of this is that we learned how to adapt, be more nimble and really think outside of the box,” said Melissa Duhaime, Director, Sports Marketing at PepsiCo. “Practically overnight, all of a sudden when sports were cancelled, we’re thinking about how we have all of these partnerships with our athletes and how we’re going to use all of these assets. When PepsiCo started to share how we were helping with COVID relief efforts, our athletes immediately were raising their hands and asking what to do to support. Athletes were recording personal video messages from their couch to frontline workers to thank them for their work, and posting on their social channels about our No Kids Hungry initiative. It was really amazing to see the athletes step up, and it strengthened our relationships with them.”