There is such a thing as a free lunch for New Yorkers using Grubhub today. 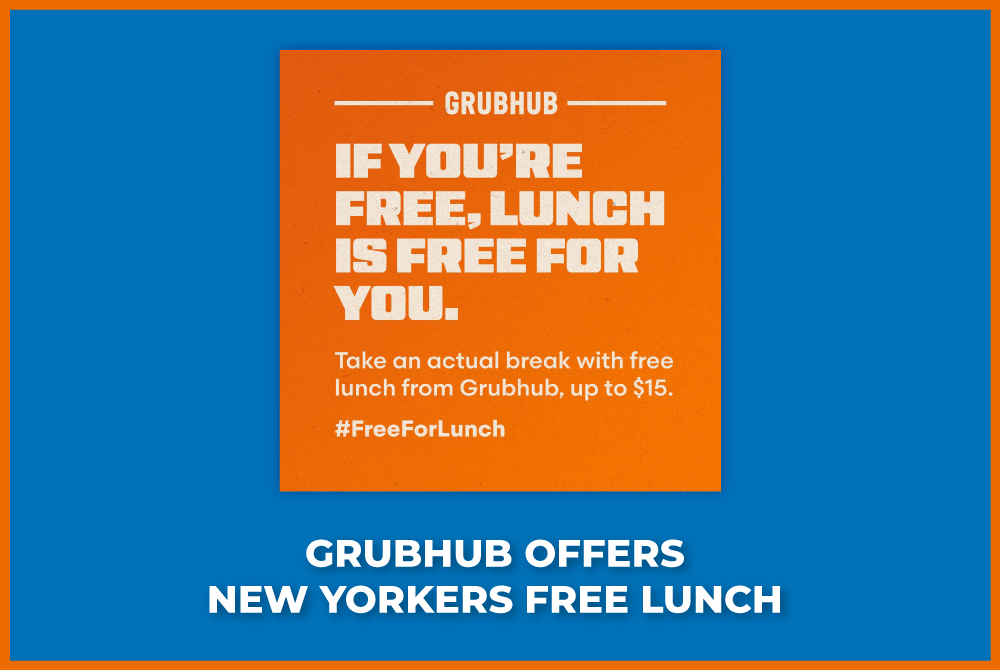 There is such a thing as a free lunch for New Yorkers using Grubhub today.

Citing research indicating that more than 70% of full-time employees cite lunch as the most important meal of the day (and nearly as many say they skipped lunch because they were too busy), the delivery company is offering up to $15 off on meals ordered on May 17.

“We want to remind New Yorkers of the importance of taking lunch,” said Ariella Kurshan, Grubhub’s senior vice president of growth. “We’re entering a new phase of the pandemic, and we’re establishing new habits, and we want to be part of that.”

The promo will be available on May 17 between 10 a.m. and 2 p.m. New Yorkers ordering delivery or pickup through the Grubhub app can enter “FreeLunch” to receive $15 off their order subtotal.

For those who miss out on the day, the company is offering an additional $5 off for New York City orders until May 31.

“New York City is a primary market for us, and we wanted to reach as many people as possible,” Kurshan said. “New York has always been ahead of the curve; they practically invented food delivery.”

Grubhub has been promoting the free lunch event through out-of-home advertising that has included transit and outdoor ads, as well as through other media often viewed by New York’s working people. “We’re really trying to tap into where New Yorkers are and how we can influence them,” Kurshan said.

The company has also set up the ability for New Yorkers to schedule a calendar invite reminding them to take a lunch break.

The effort is based on company survey findings indicating that 87% of workers across the U.S. look forward to lunch as a needed break during work. In addition, 47% of national workers say having a true lunch break improves their mental well-being and 51% say lunch makes them feel re-energized and ready to take on the rest of the day.

The free lunch promo will so far be limited to New York City, though Kurshan said the company was open to promotions in other markets. “We’ll see how the rest of the country responds,” she said.