Diageo Offers ‘Drops of Advice’ for the Holidays

The holidays are a time for revelry, and Diageo wants to make sure people’s merrymaking this year falls more toward the “responsible” end of the spectrum. 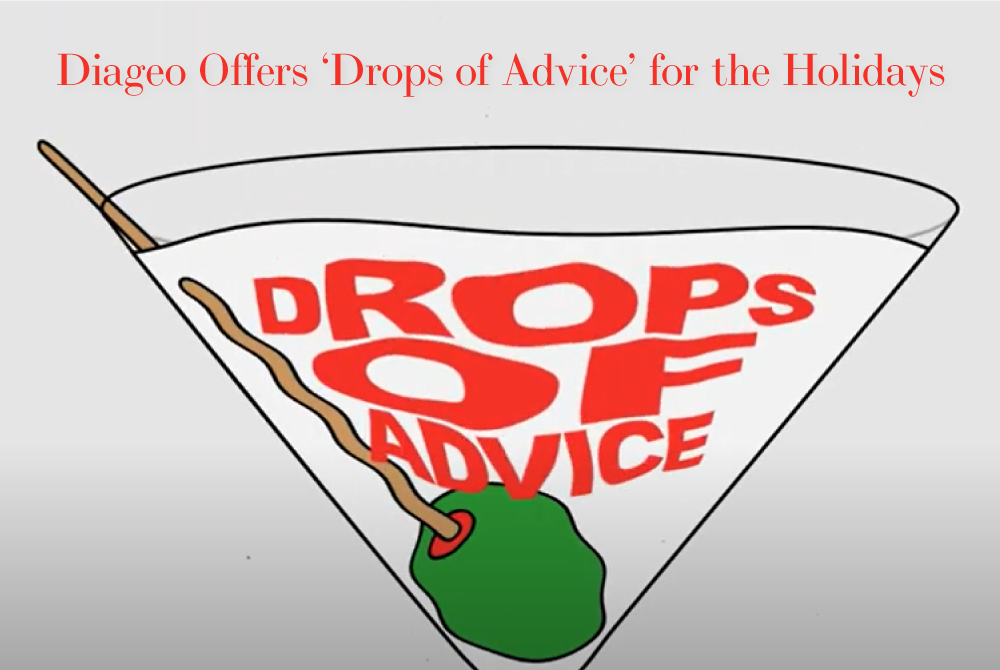 The holidays are a time for revelry, and Diageo wants to make sure people’s merrymaking this year falls more toward the “responsible” end of the spectrum.

Using its well-known Smirnoff vodka brand as its platform, the spirits company has launched a new global campaign, “Drops of Advice,” that encourages people to stop and think before tying one on during the holiday season. Through a series of videos, the campaign uses small, playful, informational nudges to offer advice in fun, practical ways.

“As the world’s leading premium drinks company, Diageo is committed to changing the way the world drinks for the better, by celebrating moderation and continuing to address alcohol-related harm,” said Ana Fitzgibbons, director of Diageo in Society, North America. “We want people who choose to drink to drink better, not more.”

Among the “drops of advice” are: “When drinking, food is your friend,” “Dance freely. Drink responsibly,” “Stay hydrated,” and “It’s ok to call it a night.” The messages are supported by whimsical animation, such as a woman dancing with a slice of pizza to illustrate how food is one’s friend or a martini glass dodging additional pours from a bartender to “avoid top ups.” The series of videos were created by Venezuelan animator Igor Bastidas and carry the tagline, “Be wildly responsible.”

“I love this tagline because it’s so relatable,” Fitzgibbons said. “Responsible drinking doesn’t have to be viewed negatively; it’s not a boring choice. You can do your thing. You can laugh wildly with your friends. You dance wildly. You can make a big entrance, or a big exit. You can be you. Just do it responsibly.”

The videos will run on Diageo’s and Smirnoff’s social channels globally. In North America, the videos will also be available in Spanish (for Mexico and the U.S.) and French (for Canada). All of the spots encourage consumers to visit “DrinkiQ,”  a dedicated responsible drinking website available in multiple languages that provides information and practical advice on alcohol.

“With this campaign, we want to promote and create a discussion around responsible drinking by providing actionable tips in a lighthearted manner,” she said. “In developing the campaign, we recognized that there is an art to giving advice and it should stay away from being preachy.

The effort builds on last year’s responsible drinking campaign, “Know when to stop,” which depicted the absurdity of excess. This year’s campaign is meant to convey the idea of a friend appealing to one’s responsible side, Fitzgibbons said. Overall, the holiday campaign is designed to be one element of a broader effort to encourage responsible consumption throughout the year, she said

“The new campaign is part of our ongoing commitment to reach one billion people by 2030 with a dedicated message of moderation,” Fitzgibbons said. “Throughout the year, Diageo runs a variety of programs to educate people on the risks of alcohol-related harm as part of our company’s 10-year action plan, Society 2030: Spirit of Progress.”