CTV Expected to Account for Half of All TV Ad Revenue by 2026: Report

As consumers continue to cut the cord on linear TV options and increase their streaming subscriptions, connected TV (CTV) and other advanced advertising techniques are becoming more front and center for brands. “TV’s New Wave: Marketers Take on the Shift to OTT, CTV, & Addressable,” a new report from Cadent, TV[R]EV and Brand Innovators explores how brands are thinking about CTV and where the industry is headed. 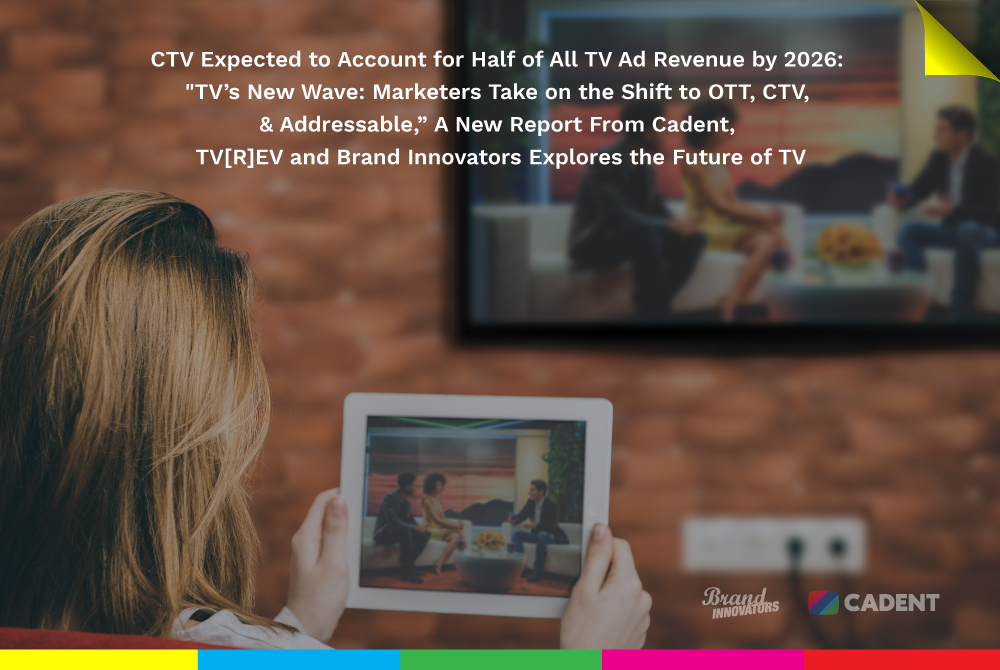 As consumers continue to cut the cord on linear TV options and increase their streaming subscriptions, connected TV (CTV) and other advanced advertising techniques are becoming more front and center for brands.

CTV offers the benefits of reach that traditional broadcast is known for, while offering the targeting benefits of digital media.“Where CTV shines in comparison to linear video is that it allows marketers to reach a more specific audience versus the broad demo approach of a linear buy,” said Jay Altschuler, VP of Media Transformation at Petco, in a new report from Cadent, TV[R]EV and Brand Innovators.

The “TV’s New Wave: Marketers Take on the Shift to OTT, CTV, & Addressable” report explores how brands are thinking about CTV and where the industry is headed. The report includes feedback from 15,000 brands. With TV[R]EV predicting that half of all TV ad revenue in 2026 will come from CTV, every brand should be considering their plan for the future of TV if they want to capture consumers’ attention.

“Linear seems to be figuring out ways to catch up–they’re introducing more addressable inventory and I think the expectation is that we will continue to move toward that one-to-one approach that we’ve been calling the mass personalization approach on linear,” said Brad Feinberg, North American Vice President of Media and Consumer Engagement at Molson Coors, in the report. “I think that’s going to happen, it’s just a matter of time.”

“As viewer behavior rapidly shifts, advertisers are tasked with understanding the full benefits of CTV, OTT and addressable TV and introducing them into their media plans,” said Paul Alfieri, CMO of Cadent, in a statement. “Technology partners have a responsibility to provide more clarity around these mediums so advertisers can take full advantage of them and reach audiences wherever they’re viewing today.”

Sixty-two percent of brands said they consider television – both traditional linear TV and CTV – to be a more premium advertising environment than web videos offering mid-roll or pre-roll advertising. Interestingly, brands noted that CTV is better than digital video for brand safety saying “digital video could wind up on many sites that are not brand safe or next to content that is not brand safe,” and fraud, adding that “CTV has less ad fraud than online video.”

“There’s been a real gap in the ability to measure OTT/CTV and deliver the metrics that brands want to see,” said Kevin Hamilton, Head of Brand Marketing, Media and PR at Avocados from Mexico, in the report. “And until brands feel they can fully trust the numbers they’re seeing, there’s going to be some hesitation. The good news, though, is that every year the capability in the space becomes a little more sophisticated in terms of delivering what we need.”

One challenge that the report identifies is that many brands are confused between the differences between CTV and OTT. Forty percent of brand executives said OTT meant “ad-supported or subscription TV services delivered via an internet connection to any device”—through a TV, laptop or mobile device. Fourteen percent said OTT is “any type or length of video programming,” while 5 percent of marketers said it referred to “live and/or on-demand video content from cable companies delivered via an internet connection.” Thirty-five percent answered “all of the above,” and 5 percent admitted they did not know.

“The most common definition among industry analysts is that OTT is any long- form (e.g., TV-like) video programming, regardless of which device it is being watched on, while CTV refers to the subset of OTT that is watched on an actual TV set, either directly via a smart TV or via a streaming device like Roku or Amazon Fire TV, and not on a laptop, phone, or tablet,” clarified the report, which called for the industry to focus on education to help address the confusion.

“One perception that stood out is that many executives feel CTV and addressable advertising are unduly expensive and are unfamiliar with the notion of eCPM and how it differs from traditional TV metrics,” wrote Alan Wolk, Co-Founder and Lead Analyst at TV[R]EV, in the report. “The focus on cost was surprising, as prices have largely come down, audience sizes have increased, and more inventory has become available over the past few years. This would seem to indicate that this is one area where the industry, particularly technology partners, networks, and platforms selling the inventory, can focus their education efforts.”