The summer is into its hottest, driest months, and with wildfires already raging, things are only likely to get worse. Coors Banquet is taking this opportunity to salute and “Protect Our Protectors” through a new special-good promotional effort. 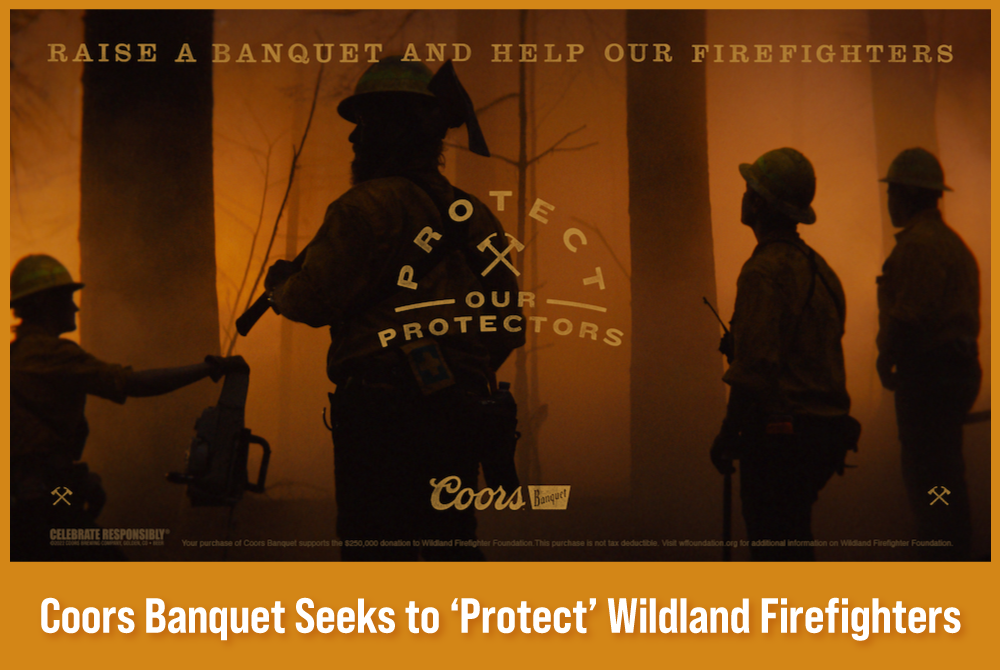 The summer is into its hottest, driest months, and with wildfires already raging, things are only likely to get worse. Coors Banquet is taking this opportunity to salute and “Protect Our Protectors” through a new special-good promotional effort.

“Based in Golden, CO, Coors Banquet is no stranger to the risk of wildfire season every year,” said Stephanie Clanfield, Coors Banquet brand manager, in response to e-mailed questions. “While the wildfire season is only getting longer and more destructive year after year, the heroes in yellow who protect us from them are only becoming more rare.”

The campaign kicks off this week with a new ad that features real wildland firefighters. The spot, which will run on ProtectourProtectors.com and Coors Banquet’s home page, as well as on social channels, depicts crews of firefighters making their way through smoke-filled and ash-covered forests. Onscreen text notes that firefighter recruitment levels are down, while a fire chief (presumably addressing his teams) notes, “You didn’t have to be back this year, but you are, and that says a lot.” The spot concludes with the “Protect our Protectors” logo and a message that the brand will donate a portion of the proceeds of its sales this summer to the Wildland Firefighter Foundation.

The brand has also enlisted country music singer Chase Rice to help spread awareness of the hardships and dangers of the firefighters’ jobs protecting the land. As part of the effort, Rice will take part in a day of wildland firefighter training to bring attention to the intensity, rigor and sacrifice the job requires, as well as the grit and tenacity it takes to run toward the fire, Clanfield said.

Coors Banquet has also created special merchandise inspired by firefighters in collaboration with Brixton. Proceeds from those sales will also be donated to the cause, Clanfield said. Supporters are also being encouraged to make direct donations at ProtectourProtectors.com.

“Coors Banquet sees how underserved the firefighter community is and has dedicated efforts to bring awareness and support to the cause for close to a decade,” she said. “The larger Coors Family of brands has a long history of sustainability and efforts to protect the environment, and the announcement of the Coors Banquet Protect our Protectors program builds on Coors’ ambition to combat the effects of climate change and become a more sustainable brand in beer.”

Coors has donated more than $2 million dollars to the Wildland Firefighter Foundation over the past eight years through its “Protect our West” program. Clanfield noted that the number of qualified wildland firefighters has been steadily decreasing and that some fire-prone regions in Washington, Oregon and California have seen their recruitment levels drop by as much as 50%.