By now, consumers know they should recycle their used plastic soda bottles. But few know what happens once the bottle goes into the recycle bin, and, as a result, many are not convinced that the process really works. 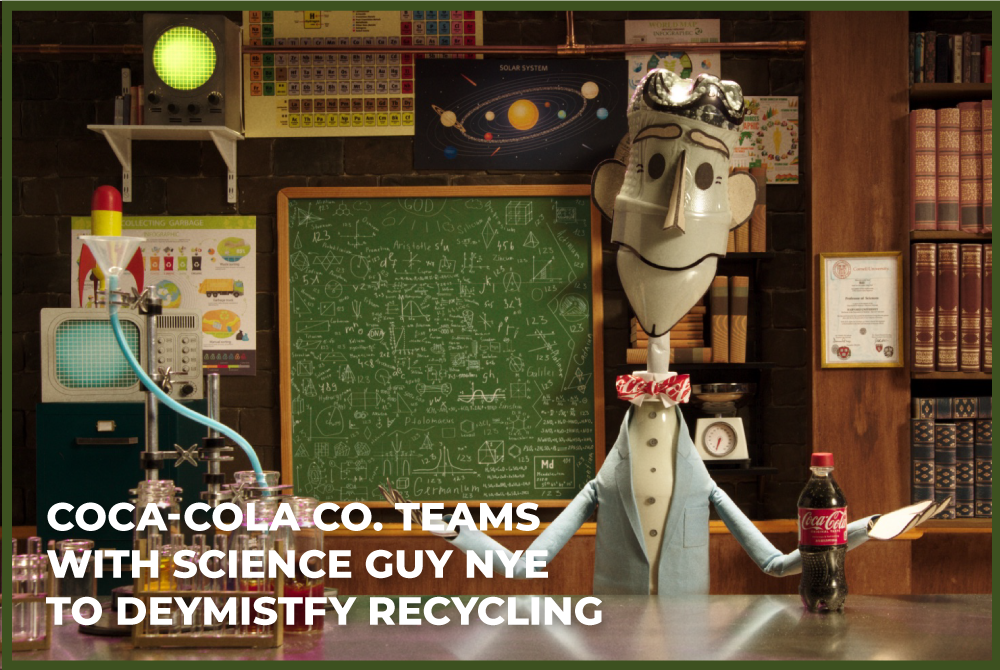 By now, consumers know they should recycle their used plastic soda bottles. But few know what happens once the bottle goes into the recycle bin, and, as a result, many are not convinced that the process really works.

To demystify recycling, The Coca-Cola Company has teamed with famed Science Guy Bill Nye with a stop-motion animated film, “World Without Waste,” that walks consumers through the entire process.

“We created the World Without Waste film to inspire consumers to understand, think, feel and behave differently about recycling -- and provide consumers with a holistic understanding of the recycling process,” said Christine Yeager, director of sustainability at The Coca-Cola Company North America. “By educating consumers on the recycling system, we hope to excite people to take action and recycle plastic bottles so that materials can be used again and again for new bottles.”

According to the company, 59% of Americans have access to curbside recycling, yet only 27% of plastic bottles are actually recycled. While information is plentiful about the recycling process, the company wanted to create a piece of content that consumers might find more engaging than a white paper or informational web page, Yeager said.

“We wanted to bring the recycling process to life in a fun, entertaining and approachable way,” Yeager said. An important part of that approach was enlisting Bill Nye, who brings scientific credibility to the project and is a well-known advocate about the dangers of climate change.

“Climate change is a very important cause to Bill Nye personally, and he recognizes the interconnections between packaging and climate,” Yeager said. “He’s everyone’s favorite science guy. With his comedic, lovable style, there is no one better suited to educate and engage people around science [and] make it understandable.”

The film, created by animation company Mackinnon & Saunders (who also worked on Fantastic Mr. Fox and Corpse Bride), features an avatar of Nye created out of recycled plastic. Over the course of three minutes, Nye takes views along the “circular journey” of a recycled bottle, from bin to being filled with a new beverage. Stops along the way include being sorted at a recycling plant, cleaning, and melting and reconstituting the plastic to become new bottles.

“The approach to the film was not just about visualizing the recycling process and circular economy, but also reflected the use of recycled materials throughout,” Yeager said. “The film is a testament to the concept of re-use through characters and sets built out of recycled materials. Beyond the recycled puppet of Bill Nye, materials from our brands’ packaging, including plastic bottles, labels and cardboard were incorporated into all aspects of the short.”