Launched in 2019, Willa was created to help take the pain out of getting paid for freelancers. Original board member Aron Levin, joined the startup as chief marketing officer, in August 2021 to help solve this challenge. 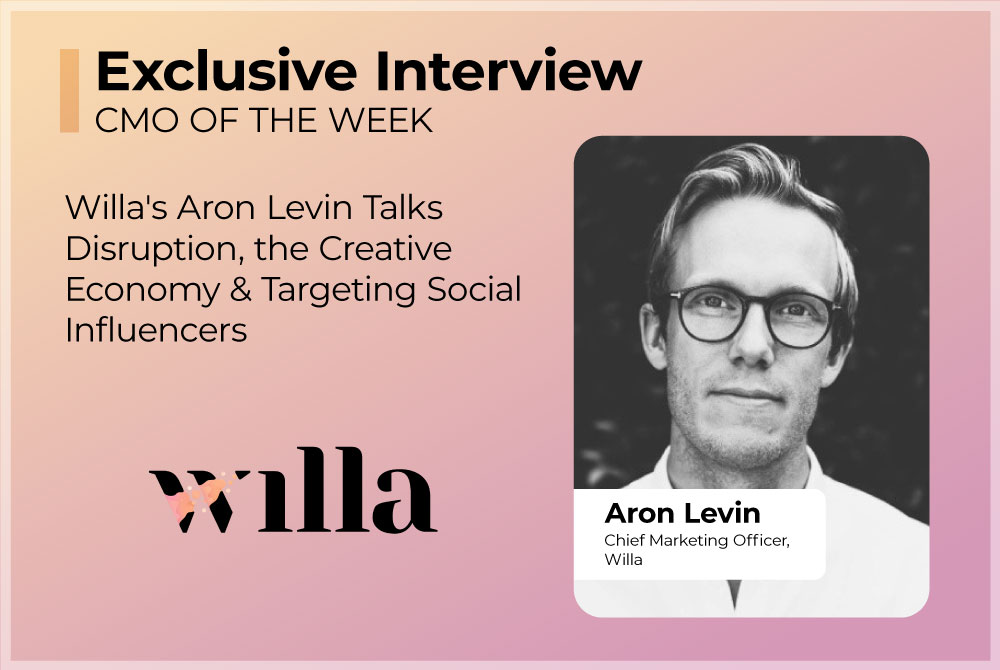 Launched in 2019, Willa was created to help take the pain out of getting paid for freelancers. Original board member Aron Levin, joined the startup as chief marketing officer, in August 2021 to help solve this challenge.

“Money is fun, finance is boring,” asserts Levin, whose aim it is to disrupt the growing creator economy by taking away the pain point these creators face in not getting paid for their work in a timely fashion. One of the biggest issues for these professionals is that they have to wait to 60-120 days to get paid for their work.

“We get creatives paid super fast and we take out all of the administrative work, the hours you spend chasing clients down to get paid out of their lives,” explains Levin. “The world is moving into this place where people are not only becoming media companies, but that people are operating as companies. We are going into a place where in a couple of years from now, it is going to be more common to be a freelancer than a full time worker.”

Willa aims to serve the 60 million people in the US that do freelance work, a group he says is underserved when it comes to these kinds of booking keeping services.

“Traditionally speaking, you either go work for a corporation and get your paycheck or you go build a company,” he says. “But then you have this group in between that are not on staff but aren’t really a company either. This group contributes $1 trillion to the economy every year. They are in a lot of trouble because the world is not built for them. We exist to support that part of the world or the population or the economy.”

Willa is tapping influential freelancers to help get the word out about their service. Brand Innovators caught up with Levine from his home office in Los Angeles to discuss how new technology allows their service, how they are building audience and brand and why he gave his personal phone number out to 5000 customers. This interview has been edited for length and clarity.

What is your vision as CMO of Willa?

There is a big challenge here for any company who is going out to that size of a market. We have an audience of 60 million people and growing, more or less every other person. Our vision is that we offer a super fast way to get paid and it is what all of those creatives use to get their money.

We are going with an audience strategy where we corner that right part of that market and we leverage to expand that universe. One example from another company is Braintree, a payment service provider not quite like Willa. Back in 2013, they were acquired by PayPal for $800 million. They got started by going after the Ruby on Rails community. This strategy was successful because this is a highly influential community and other developers listened to these professionals.

How is the fintech space evolving and where do you see it going in the next 12 months?

Nobody really likes traditional banks. I think that is fairly established. They have negative NPS scores, but you have been more or less stuck with your bank because they have tremendous power. It is very tricky and expensive to enter the market.

What we have seen over the last couple of years is that the technologies are more affordable and are more available and as such there are a lot more companies entering the market. To be honest, we could not have entered the market 10 years ago. But the technology is less expensive now and the knowledge and experience is there and we can build what consumers want. Over the next year, we are going to see a lot of companies enter the space that try to create consumer-friendly products for big audiences that are in a lot of pain, similar to what we do at Willa.

What does your branding and marketing strategy look like and how are you trying to stand out in the marketplace?

The way I think about marketing and building brands is that there are these core principles that I have learned over the years and our team is positioning this into our work. You need to do two things, not only for Willa but for any company, you have to figure out distribution. It is what builds attention and gets the word out. The other one is association, what you are known for and what shapes your perception of the brand.

At Willa, our distribution is influencer marketing, or the creator economy and the association is the new thing or people like media companies. Willa is using the distribution of a new generation of the creator economy of 5 billion people. They understand culture and context better than anyone else. We get attention from following those we like and trust. You can have 100 million followers and not have attention. People are media companies. Every single early adopter Willa user is a social media influencer. They are early adopters. This audience likes new and emerging technologies. They have a lot of influence over their peers. It has been about tapping this audience. We have this diverse group of creators that all share this common problem that we share with our product. New brands have always been built this way.

What does innovation mean to you at Willa?

From a marketing point of view, innovation is about doing what doesn’t scale, because it is the most difficult thing to do but it is also the most rewarding.

We do freelance invoices. We buy invoices from an individual, we pay them and we automate the process. Invoicing has been around for a lot of different verticals for years, it is not new, but it hasn’t been around for independent contractors because people could not figure out how to scale it. We have solved that problem. It was the most difficult challenge but also the most rewarding.

My goal was to talk one-on-one with as many partners, our users, as possible. Last year, I gave out my personal phone number to 50 or so of our early adopters and I told them I am one of the founders at Willa and said, “If you have any questions, you can text me personally.” I was scared because I wanted to help our users, but was worried they would call me at all hours of the night. But it didn’t happen that way. People were really really friendly. They loved the idea of direct access. They asked smart questions. I got a lot of useful learnings from those conversations. I was not overwhelmed. People were very respectful. So I gave it to 500 people, then 5000. We also have a customer service team, but I now know exactly the way our users talk, what kinds of questions they ask that they can't find online. If there is a problem with a product, like a new app feature, they will text me and let me know.

It creates this deep level of trust. They know they can talk to a real person. I can’t help every person with every problem, sometimes customer service does, but I can talk to them and understand their challenges. I am surprised that all companies don't do this.

What is your approach to leadership?

Me demonstrating to my team that I am going to make myself vulnerable shows them that by sharing my phone number shows them I really want to talk to our users. Then the marketing became mind reading. We are able to go out and craft messages that truly speak to people.

From a leadership point of view, I think this is inspiring for our team because they can see that we really care about our users. We do a lot of events. We meet a lot of people in person. And I saw a lot of people on my team at events giving out their phone numbers. It is the team looking to me at what I did and they learned from me. They saw that it was rewarding for me and it was for them too.

I welcome all ideas, especially the poor and the bad ideas, to build on them. That is how we have done some of the most rewarding work we have today. It has all started with a bad idea that we built on. To create that atmosphere and set a mood where the team members know, if you suggest a poor idea we will build on that and turn it into something good. Rather than the other way around where people are afraid to voice their opinions.

I believe the best marketing you do is where you break the rules. In order to break the rules, you need to have operating principles so that you can function as a team. One is that we dial it up to 11. We always want to be the loudest voice in the room. Another is, money is fun and finance is boring. We have 7 or 8 that we use to make sure the team is going in the same direction while breaking the rules, so that we create great work.

What are you most excited about for the last quarter of the year?

We are launching a couple of new products that are going to be really really exciting for our users and also for our team. We are going to build more banking online services that help solve problems that freelancers face.