Vroom’s chief marketing officer Peter Scherr talks Super Bowl ad, upping his marketing spend on influencers and why touchless experiences will be here to stay even after the COVID-19 vaccine has been widely deployed. 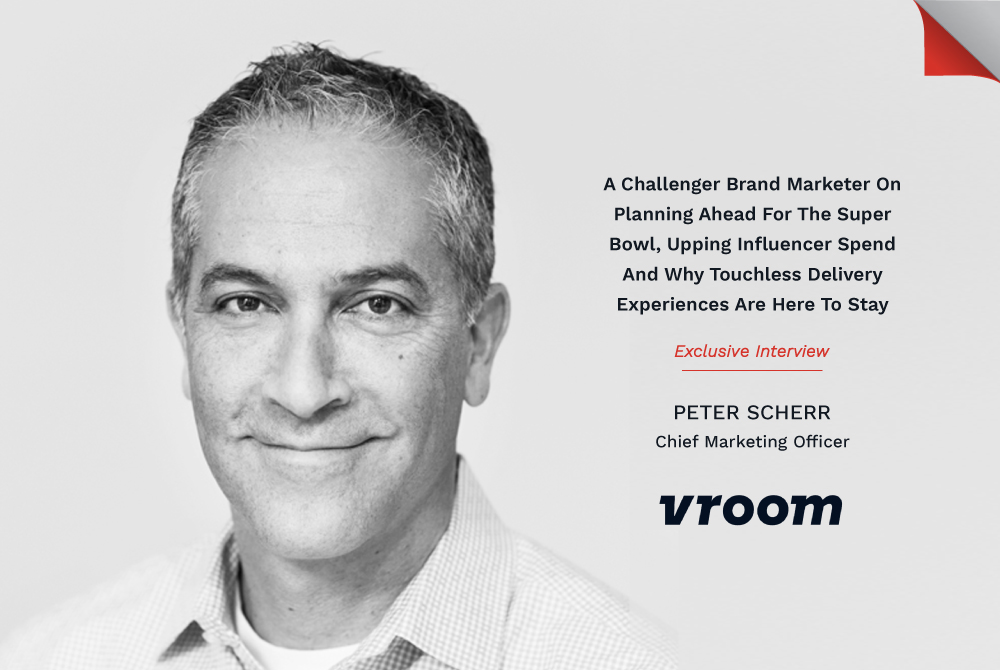 Vroom’s “Dealership Pain” commercial that aired during Super Bowl LV on February 7 marked a dual milestone. Not only was it the first Big Game campaign in the online used-car retailer’s nearly eight-year history, it was one of this year’s only Super Bowl commercials that was shot before the COVID-19 pandemic had widely spread in the United States.

Filmed in February 2020, the commercial was one of several spots Vroom filmed with its ad agency Anomaly to stock up on multiple sequences to a campaign that its media agency, Ocean Media, could then run through audience testing to determine which would perform best. Though the timing is now prescient in hindsight, Vroom’s chief marketing officer Peter Scherr says, “There was a bit of luck at play — and a lot of consumer research that went into developing that campaign. We were excited for it regardless, but the Super Bowl was still a twinkle in our eye at the time so I wouldn’t say we had the foresight necessarily. We had terrific creative and eventually the business results that gave us the confidence to place a buy in the Super Bowl this year.”

Shooting a Super Bowl spot months in advance was the first of many moments where Vroom found itself prepared for the ever-changing consumer landscape of 2020. Its core business model — which enables consumers to skip the dealership for buying and selling used cars online with a straight-to-your-home delivery model — was already touchless and COVID-safe while traditional automakers spent months figuring out their own pivots.

Such existing innovations helped propel Vroom to a record year of growth and revenue in 2020, finishing the year with an 82% lift in ecommerce unit sales (including a 74% spike during the fourth quarter) and revenue of $915.5 million (up 56% from 2019). Up next? Expanding its artificial intelligence capabilities, following the December news that Vroom would acquire CarStory, an analytics platform that uses AI to aggregate used-car listings from thousands of sources.

Scherr joined Vroom in 2017 after a series of senior roles at companies that span many different marketing sectors, from Better Mortgage (where he was CMO from 2015 to 2017) and American Express to Warner Music Group and JetBlue. No matter what each company sells, Scherr says, “It all begins with a world-class digital user experience. I've found that once you have that foundation, it gives the brand permission to extend into stronger and wider brand messaging and communications to drive results.”

Based in New York, Scherr caught up with Brand Innovators from a family trip to Florida to talk the consumer insights that led to Vroom’s first Super Bowl campaign (and the in initial response), upping his marketing spend on influencers and why touchless experiences will be here to stay even after the COVID-19 vaccine has been widely deployed. The conversation has been edited for length and clarity.

Brand Innovators: What prompted you to place your first Super Bowl buy this year, and what message were you looking to get across?

Peter Scherr: Back in June, we took the company public, which is an exciting event in and of itself. But in the end, it's really a capital raising exercise. So that led us to one of the key uses of the capital, which is ramping up our marketing efforts in 2021. We were looking to bring mass awareness to our brand, based on the idea that there's no better way of buying and selling cars. As fast as we’re growing, it’s still relatively unknown that you can do that online. And there’s really no bigger stage to do that than the Super Bowl, to remind consumers that with Vroom you never have to go to the dealership again to buy or sell your car.

We’ve seen research that shows massive dissatisfaction with the traditional car buying experience. According to a Gallup poll, 81% of consumers are dissatisfied with the current experience. And that dissatisfaction comes in all forms – wasting time at the dealership, feeling pressure to buy or sell your car, lack of transparency-and car buyers are forced through this tumultuous experience of purchasing a used car at a physical dealer and the pains and pressures that come with car salespeople and dealerships. Vroom offers people a much more convenient experience and brings the car right to your driveway, which is more important than ever.

We felt like from a tone standpoint, we really wanted to create that contrast between a traditional dealership and Vroom by using these comedic and hyperbolic images. In terms of the dealership we portrayed in the Super Bowl, that was a very extreme comedic example, but it contrasted with the digital, easy-to-use experience of Vroom.

Now that it's been a month since the Super Bowl aired, what initial success metrics or other key indicators have you seen from the campaign thus far?

While I can’t talk about specific metrics, we saw a tremendous response to our Super Bowl ad. A lot of planning went into this effort aside from just preparing the spots. First and foremost, we saw really strong traffic to Vroom.com. And then what we’re particularly excited about was seeing many of these visitors actually engage with our e-commerce process and begin to actually transact with us. We also experienced really positive social media engagement and we were thrilled to engage during the game with brands like Rocket Mortgage, we had some social banter on the fly during the game with them which was fun.

How has your overall media mix shifted this past year to meet your consumer where they’re spending more time now?

We have expanded into things like influencer marketing. That was something that we’re really excited about because the breadth of content and personalities and how that space has matured really allowed us to tailor our brand message and desired audience reach through that emerging channel. We’re going to be expanding to podcasts as well, which has matured into being quite a bit more efficient to participate in than it used to be. Also in our media mix, digital has always been here, but we’re constantly looking for ways to expand and optimize that channel as well, like with streaming services.

What are some pillars you've identified for the Vroom brand that you've activated against this past year?

Vroom is a very data-driven company, and in partnership with our agency Anomaly we did a fair amount of research for our current campaign to understand the current state of the customer experience in traditional dealerships. People are just extremely frustrated with what they perceive to be the only choice in buying a car, which we saw from sitting in focus groups with a range of different socioeconomic data. Whether it was their first car, their fourth car, it kind of spans across the spectrum demographically that people are terribly frustrated with the current states of affairs they feel resigned to.

What that led us to in our TV spots was we really wanted to contrast this difficult customer experience with Vroom’s strength as a brand. And that manifested in transparency, low pressure and convenience in the sales experience.

What are some new consumer trends or behaviors that you saw develop last year that you think will stick as we start to come out of the pandemic later this year?

There's really no question that buying and selling a car online is a very durable consumer behavior that only accelerated during the pandemic. Consumers are only getting more comfortable with the service that Vroom has to offer, and there's no turning back with this rapid adoption. It’s analogous to what you’re seeing in other verticals – if you look at groceries and food delivery, maybe they’ll recede a tiny bit but as we get on the other side of this crisis they’re really here to stay and quite durable.