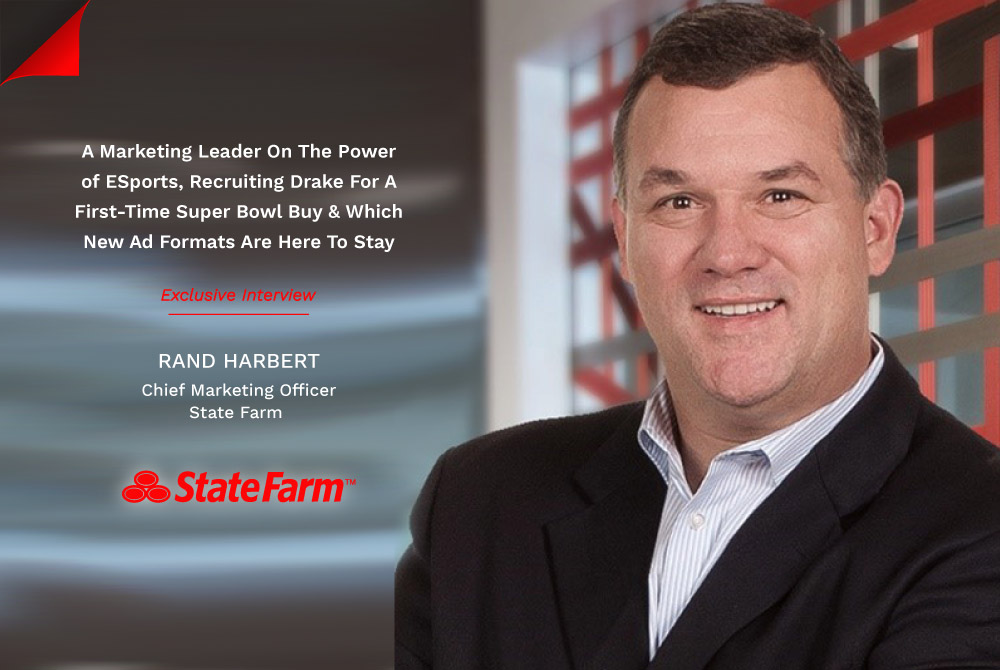 State Farm has long been one of the most active brands in live sports, allocating hundreds of millions of marketing dollars into league, naming-rights and broadcast sponsorships. But it took a confluence of events for the brand to finally place its first buy in the Super Bowl this February.

State Farm has long been one of the most active brands in live sports, allocating hundreds of millions of marketing dollars into league, naming-rights and broadcast sponsorships. But it took a confluence of events for the brand to finally place its first buy in the Super Bowl this February.

The insurance marketer’s popular character Jake From State Farm, played by actor Kevin Miles since 2020, had quickly become such a hit with consumers that chief marketing officer Rand Harbert tasked his agencies to come up with a big idea that could pair Jake with quarterbacks from the participating teams and a few surprises. The result was “Drake From State Farm,” in which the hip-hop superstar became the biggest previously unannounced celebrity cameo to debut during this year’s Super Bowl (alongside Kansas City native Paul Rudd).

“We thought we caught magic, and to put it out there in advance would have taken away from the element of surprise,” Harbert says of the brand’s pre-game strategy, which instead relied on teasers starring Aaron Rodgers and Patrick Mahomes.

The event-based rollout paid off. The spot has been viewed more than 9.3 million times on YouTube, and over 2 billion campaign impressions helped State Farm place No. 8 out of 57 on USA Today’s Ad Meter (the highest rank of any first-time Big Game advertiser in 2021). “By every measure, it performed the way we hoped it would,” Harbert says. “There’s a lot of times where your confidence can let you down, but this one didn’t at all.”

Such a marketing milestone was a fitting way for Harbert to kick off his 30th year with State Farm, having joined the company as an agent in 1992 and working across roles in multiple divisions before ascending to his current role as CMO in 2013. Harbert has spent those eight years focusing on innovative event activations (State Farm has been a pioneering sponsor of esports years before activity accelerated during the COVID-19 pandemic), advancing diversity, equity & inclusion on and off-the-camera and delivering on the brand’s “Like a good neighbor, State Farm is there” tagline by returning $4.2 billion to customers via rate reductions and dividend credits during the 2020 economic recession.

Brand Innovators caught up with Harbert from his office at State Farm’s Bloomington, IL headquarters to learn more about the brand’s media mix pivots from the past year, the evolution of the Jake from State Farm character and the new ad formats that have been performing well for the company. The conversation has been edited for length and clarity.

Brand Innovators: How did the tone of your messaging during the first initial phases of the COVID-19 pandemic last year?

Rand Harbert: The first ad we did was we spliced footage with a voiceover, which we felt was really appropriate and timely. The second featured our CEO, an agent and five employees on cell phones. We put that together, a producer Skyped in and walked them through, the two ads together were put together in a total of 10 days, which felt like a record because you can barely get people to agree on anything in 10 days.

The third thing I would say is our brand is synonymous with sports. It’s not because we’re sports fans, though I think we are, but we love sports because of the live nature. We’re used to spending a lot of our money touching people that way, but the question quickly became “How are you gonna do this differently [when sports are on hiatus]?” So we did some things like a live interaction with Jimmy Fallon on “The Tonight Show.” It worked so well as the beginning of the pandemic that we came back and did it a year later. We were able to get our message out and support some really worthy causes that were very timely, and so we just had to really work and think differently. I think with innovation, you don’t have a choice. You really find out how good you are at innovation in times like these, and I give our team an A+ for how they literally innovated by the day.

Jake From State Farm has become a signature character for the brand this past year. How has that concept evolved?

We did an ad back in 2011 that introduced this concept of Jake, where we had this call center character who was truly an employee who worked for State Farm and wore khakis. We would air that commercial four years later and it would get the same kind of positive response as when it first aired, so we knew we had something with that character. We weren’t at that time looking to create the character with an actor, because over the years we only used our real agents in our ads. We just weren’t in the mindset of characters.

So even though that ad first aired 10 years ago, the reality is Jake never went away. We were looking at data like college Halloween outfits in 2018, the most popular male costume was Jake From State Farm  and we hadn’t even run that ad in five years. We were thinking less about a character and more about a consistent format, so we of course went to Jake and made the decision quickly that if we were going to utilize Jake we were going to have to go to find a professional actor.

And over the past 14 months, that character has truly become a phenomenon. We felt really blessed in that we picked the right person who I think really embodies the brand. And it’s amazing how Kevin himself has become a household name, he went from Jimmy Fallon to ESPN programs to being featured in magazines. It's been a magical ride, and we just love the person that he is. We really think he’s telling our brand story in a great way.

What actions have you taken as a marketer to enhance State Farm’s diversity and inclusion on both sides of the camera this past year?

I feel really blessed to be part of State Farm because diversity and inclusion are not just words here, and they’re not new things in our space. We have built a brand based on that, and we serve really every part of the country. Our business practice is really built around the diversity mindset, even if you look at our spots. Our work speaks for itself, and that’s the way we frame the conversation via marketing and advertising. And like the world, we’re striving to be better at it and get better everyday. But this is not a new thing here and we’re all proud of that.

How are you thinking about the return of live events from a sponsorship standpoint as we start to embrace hybrid formats of virtual and in-person?

The media landscape likely has changed forever, and what COVID did was probably accelerate that honestly by three to five years. It was clearly moving that way, if you look at the acceleration of digital channels. We believe live events will come back, there's no doubt about that, but the engagement around live events will be forever different. There’s going to be an online component to everything that advertisers do going forward, and it won't be the either/or environment we grew up in. It will be “How can we engage at all times on digital, remaining at the forefront and not the last thought?”

You simply can't touch the broad audience if you're not thinking about streaming platforms, or how you connect to social issues if you don’t think about how you connect with the gaming community. These were questions we weren’t necessarily asking five years ago, but any time we start any new initiative those things move to the front of the line. If you can't check boxes on those things on the front end, it doesn’t get consideration to go further. We’re just making that part of everything we do and push the way forward in our thought process.

I talked to someone the other day in our business, and they had the opportunity to talk to seniors in high school about being in advertising, and he asked 25 kids, “How do you consume content, and how many of you consume linear TV?” And the answer was zero. Zero out of 25, age 18. That makes people like me stand straight up and say, “Are we paying attention to all the right things?” Because if you're not you're not gonna be heard, and if you're not heard you’ll lose your volume.

What ad formats are working for you with the acceleration of OTT and streaming content?

Virtual on-demand is here to stay. All the new ad formats: binge ads, shorter breaks, ads within the show, products being put into the show — all those things are going to be front and center. And we can tell by the things getting in front of us today that we’re not just thinking about it on the business side, on the content creation side people are very much thinking about it. If you watch the late night evening programs, it's hard to catch one where there's not some type of integration. I think consumers appreciate the shorter ad time, and I also think they appreciate the more thoughtful approach.