Christina Smedley barely had four months under her belt as chief marketing officer at stock-trading app Robinhood before the avalanche of activity now described in media circles as “The GameStop Saga” occurred. 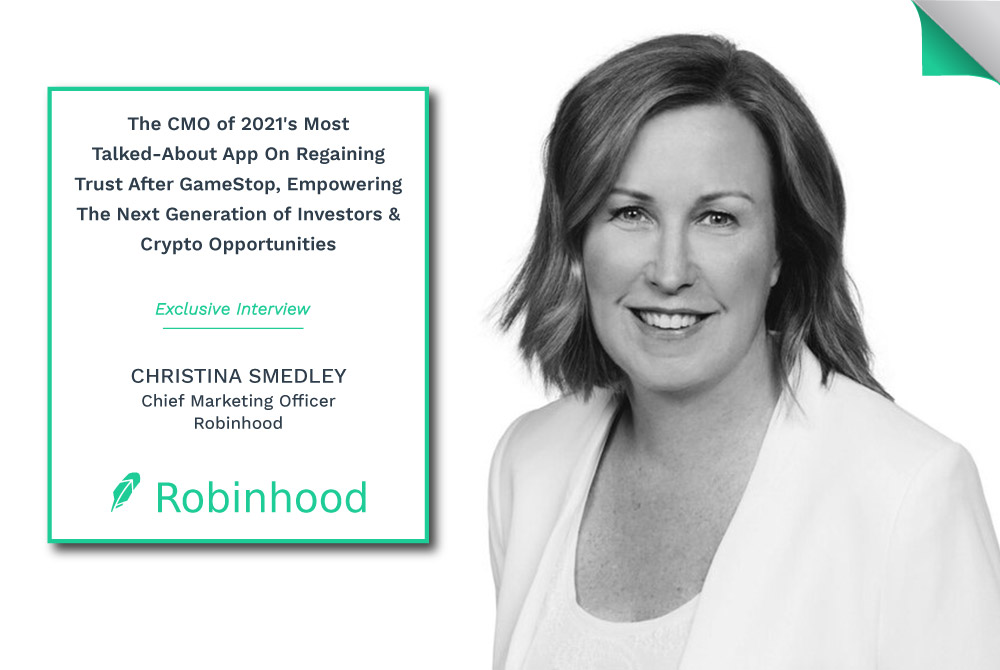 Christina Smedley barely had four months under her belt as chief marketing officer at stock-trading app Robinhood before the avalanche of activity now described in media circles as “The GameStop Saga” occurred.

Virtually overnight in late January, an influential community of Reddit users decided to buy a bunch of stock of the struggling video-game console retailer GameStop using free platforms like Robinhood. The viral trading trend caused a sudden influx of user activity on Robinhood, and caused hedge funds and other large investors who were betting against GameStop’s stock price to suddenly lose money. By January 28, Robinhood made the controversial decision to block all trades of GameStop on its platform, which led to a congressional hearing, protests outside the company’s Silicon Valley headquarters and numerous lawsuits and consumer complaints.

Just five days later, Robinhood debuted the creative for its first Super Bowl campaign, “We Are All Investors,” which showcased the democratized access to financial resources that the GameStop sage helped accelerate.

And as Robinhood has showcased in subsequent ad campaigns, the events of the past year have only helped the brand change the face of the modern investor. Says Smedley: “The way I frame it internally is that a few years ago, the word ‘creator’ became something people were proud to be with the rise of Apple and Instagram. Now we see the same thing with the word ‘investor.’ I think 64 million adults in the U.S. are interested in investing, and we’ve helped double the industry average of African-American and Hispanic investors on our platform. These are people who've been completely overlooked previously, and bringing those to the platform has been a driving force of this era.”

Despite the ever-changing customer attitudes and congressional scrutiny surrounding Robinhood, Smedley was poised and optimistic about the fast-growing future of the app when she spoke with Brand Innovators in late April. Her diverse background across the financial tech background probably helps: prior to joining Robinhood in September 2020, Smedley spent nearly five years at Facebook in various roles, including a stint as head of marketing for its Blockchain platform, and held senior communications roles at PayPal, Edelman and Amazon prior to that.

Read on for Smedley’s candid takes on the GameStop saga (which she refers to simply as “January 28”), the opportunities in crypto currency and regaining trust with consumers after such an unprecedented event. The conversation has been edited for length and clarity.

Brand Innovators: You recently came to Robinhood last fall after nearly five years with Facebook. What appealed to you about the opportunity, and what were some initial plans you put in place for the brand after you joined?

Christina Smedley: I’ve used Robinhood since 2015, and I remember the first time I used it I thought, “Wow, this is so cool and so easy to use.” I stayed in touch with the team over the years, and they agreed it was time for me to come and help. The thing I'm really interested in that Robinhood has built is it has enabled us to open up to a whole new generation of people who before felt very excluded. They either didn't have the wherewithal or thought they could never find their way in to the stock market. It’s the biggest wealth creator of the 21st century and many people are left out of it, so being able to bring it to as many people as possible is great.

Once I joined, there were two different things I needed to get done. I really had nobody looking after brand marketing, product marketing, social, life cycle — all the different fundamentals of the marketing channels didn’t exist. The other piece was to reframe and articulate what the brand stood for, which you saw in our Super Bowl ad in January, and that was around this idea of everyone being an investor. And you'll see that over the course of this year. One of the mission statements Robinhood has is to democratize finance for all, so what we've tried to do is create product marketing campaigns that really remind people they can take that first step into the market. And I’m really thrilled with this. We’ve seen a third of our consumers are women joining the market, which is already up multiple percentage points from when I first joined, and more than 30% of our customers are non-white and joining the markets for the first time.

How did those initial plans evolve following the explosion in user activity this January with GameStop trading?

January 28 was an unprecedented event. It brought democracy, community and finance all together in a very hot 48 hours. For us, I think it was interesting because we didn't have much time at all to prepare I think we were a little slow and not clear in explaining what had happened to our customers, which I’m sure was very frustrating and we’re very sorry for that from a marketing perspective. But it became clear we were facing a very simple position and we have a very complex truth to explain. And while investing is not something people do everyday, they still don’t understand the mechanics of what happens on the backend.

So what we plan to do is pivot a little bit to address that very complex truth, and you'll see us participating in podcasts. Vlad [Tenev], our CEO, launched a podcast that went straight to number one on the business section, and number four overall. We also participate in things like Clubhouse, do fireside chats with customers, every week that we put on social media so people can hear people like themselves around the idea of “I’m an investor.” The other thing we’ve done is we’ve had Robinhood Snacks, a newsletter vehicle with 32 million subscribers, we've really doubled down with educational materials in the app and out of the app.

We have a Learn platform, which takes you through everything from the basics to “What is dogecoin?” which is very popular right now. It’s very plain, easy-to-read formats and it's helpful for the customers because they can find 650 articles in the app, and we have a website platform where people can find tips on their own time. The growth on that is staggering — it’s up 310% year-over-year.

What business trends gave you the confidence to place Robinhood's first Super Bowl spot in February, and what impact have you seen since the ad aired?

It was a convergence of a lot of things. Clearly January 28 meant that our brand awareness leapt significantly, and that has really continued. I think about half of 18-to-34 year-olds have heard of Robinhood now, and half of them know what we do, so we’re seeing all sorts of people coming to Robinhood now. And my job is to make sure they fully fund their accounts, build them, learn more and participate in the app more. The interesting thing about the Robinhood customers is they come to us early in their investing journey. We see an opportunity to cross-sell other products like Robinhood Gold.

The GameStop influx of users also sparked controversy after Robinhood blocked purchases of GameStop stocks through the app. How have you used marketing to regain trust, and any initial impact you've seen?

I’m a great believer that trust comes with doing, not saying. We’re working very closely with our product teams to make sure that wherever we are, we articulate what Robinhood is doing and that their money is safe. Safety first is a value for the company, and over the following months you’ll see us dig into what that means for people. We’ve tried to become very transparent, explain how our crypto pricing works, and that’s something we didn’t do before. We’re really trying to do things rather than just say them, and it’s working quite well. We’re seeing our brand sentiment tick back up, particularly this new group who joined after January 28. They’re very engaged with the product, and that’s something that we think will help us lift our trust scores.

Having gone through the whole gauntlet of January 28, do you feel more prepared for the next version of something like that?

It’s never gonna happen again in our lifetime. I wouldn't wish it on any marketing or communications teams. But we learned a lot, and I’m super proud of how the team came together because we were very new as a group of individuals. I speak to customers every single week in my role as CMO. I literally go and have conversations with people, I talk to them a lot about what happened and what it meant to them, and you can hear in their stories they’re really beginning to respond to the vehicles that we’ve put together for them.

For instance, we weren’t working with financial influencers previously, which is a whole cadre of people who have influence on this generation. We put campaigns together with personalities who can really explain Robinhood to people.  We’re on TikTok now, which we weren't before, we just did our first AMA on Reddit — those are things we learned from listening to customers. We also produce a lot of content. Our production from January 28 to today is up 5x from what we were doing before. We really began to meet people where they are and addressed their needs in a very Robinhood way.

The crypto-currency marketplace is soaring with NFTs and other assets right now. What opportunities have you found there for consumer education through your marketing messaging?

It’s been staggering actually. It's interesting — we are one of the only places that you can buy dogecoin on the internet, and it's been steadily growing. Now about 40% of our customer base are women who are active crypto traders, and we've announced 6 million new customers on Robinhood are crypto traders. Crypto is stereotyped as a male-dominated space, so we’re excited to see it more democratized. We do “Week In Crypto” updates, and it's one of those places where you see a change in the consumer dynamic in participating in something.

Financial services and fintech have had a transformational year. What new consumer trends do you think will be short-term as we get back to in-person experiences at scale, and which do you think are here to stay?

I think the thing we are seeing when we talk to people is that investing is now part of their daily lives. I do think during the COVID lockdowns, people sat at home and really thought hard and long about the future and what the opportunities are for them. We see now that investing is something they do everyday. People use Robinhood in their kitchens, their sitting rooms, even their bedrooms. I think that daily habit formation will stick.

I also think that because people now understand that the markets can be something you participate in, that hunger to learn and understand more about how it will lead to change. We have this massive responsibility to make sure we’re providing education in as many places as we can.