For over 25 years, Frank Cooper’s name has been synonymous with cultural marketing.Following his early days as a music executive at Def Jam and Tommy Boy Records, a co-founding role of Urban Box Office and two years as a VP in the heyday of AOL... 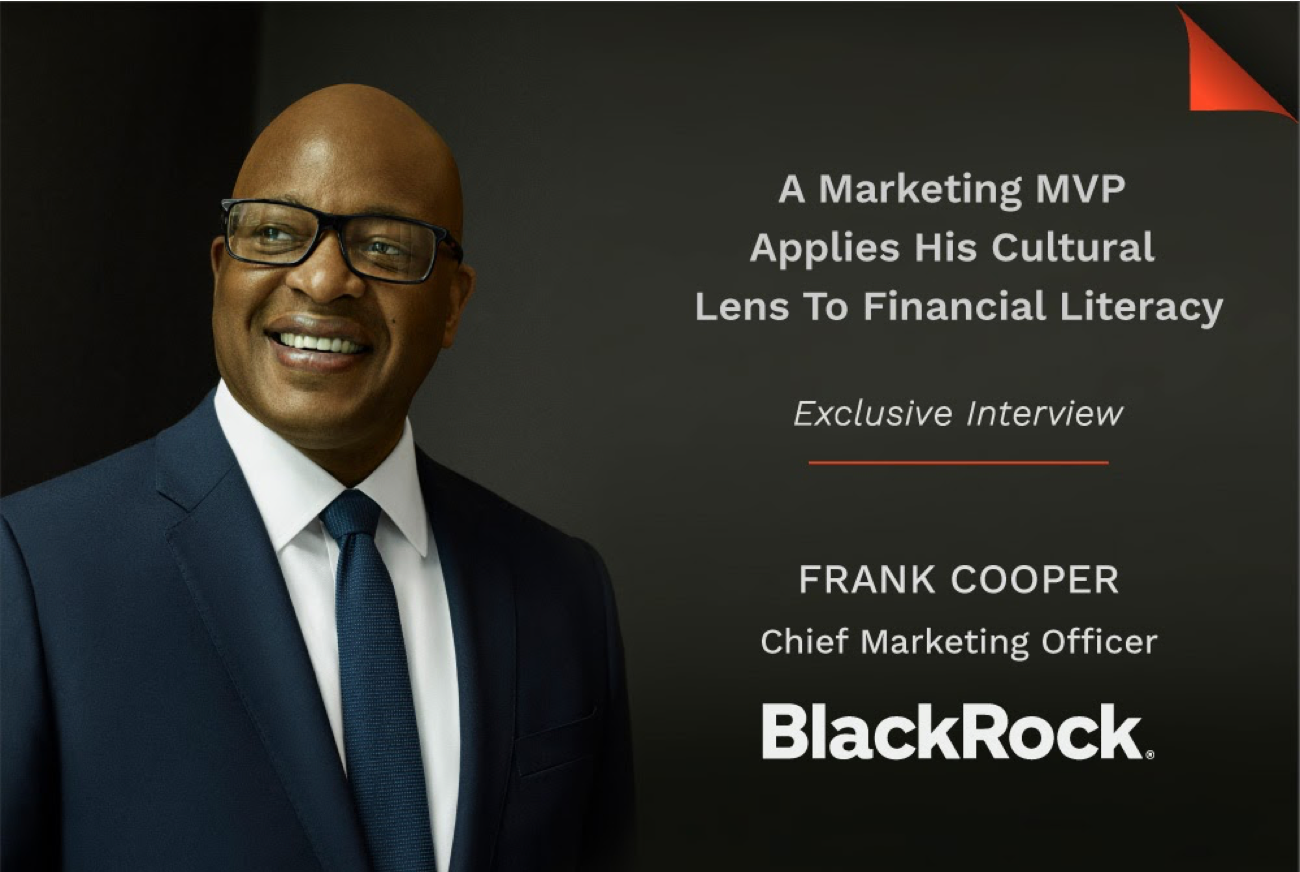 For over 25 years, Frank Cooper’s name has been synonymous with cultural marketing.

Following his early days as a music executive at Def Jam and Tommy Boy Records, a co-founding role of Urban Box Office and two years as a VP in the heyday of AOL, Cooper’s 12-year tenure at PepsiCo (including five years as chief marketing officer – global consumer engagement) showcased his innate ability to fuse pop culture and demographic insights into marketing messages that have blazed many trails for other brand marketers to follow. This included integrated sponsorships with the NFL (like the Pepsi Super Bowl Half Time Show) and NBA, global partnerships with pop icons Beyonce and Nicki Minaj and a series of forays into original content across PepsiCo’s portfolio that helped make him a four-time Power 100 honoree by Billboard and the recipient of AdColor’s Legend award, among many other industry awards.

So when Cooper left his most recent role as chief marketing officer and chief creative officer at BuzzFeed in 2017 to join investment management firm BlackRock as its Senior Managing Director and Global Chief Marketing Officer, the cultural marketing throughline might not have been as apparent for a company best known as the world’s largest asset manager. But in fact, it was a pop culture moment that led Cooper to his current perch.

“The epiphany happened for me when I saw the movie ‘The Big Short,’” says Cooper of the 2015 Oscar-winning comedy depicting the 2008 financial crisis. Prior to seeing the film, Cooper would ask his friends in financial services to explain concepts like credit default swaps, and  inevitably “my eyes would gloss over after 10 minutes…But in ‘The Big Short,’ you’ve got Margot Robbie in the tub of champagne, I see Selena Gomez in the nightclub explaining what are supposedly complex financial concepts in really simple terms in short-form, and I understand that.”

Since joining BlackRock three years ago, Cooper has been applying the film’s accessible approach to financial literacy to help launch a series of content and new-media initiatives aimed at both b-to-b audiences (podcast “The Bid,” YouTube series “BlackRock Bottom Line”) and more general-market consumers (a series of “Wealth” vignettes for 60-Second Docs.) “There’s an opportunity to transform what financial literacy means,” Cooper says. “Most of the marketing previously around financial services has not connected to people in that human way. There was an opportunity to speak to larger parts of the population across the entire globe in ways that they can understand in simple terms.”

Cooper will discuss these programs and many more in a Virtual Fireside Chat at Brand Innovators’ inaugural Marketing Innovation Summit this Friday, May 15, from 2:30 – 3:15p ET. Register for the virtual event HERE.

More recently, BlackRock has been paving the way for how the financial services industry is weathering the COVID-19 pandemic. In its recently announced first-quarter 2020 earnings, the company announced an 11% increase in year-over-year revenue despite early impact from the global quarantine. Cooper also notes that the company has pledged to not make any layoffs due to COVID-19 impact, and has canceled all public events through the remainder of the year to prioritize health and safety.

Brand Innovators spoke with Cooper from his quarantine home in the Hamptons to learn more about how he’s applied his cultural marketing lens to financial services, and the innovations he’s most excited about that will shape the next 12 to 18 months. The conversation has been edited for length and clarity.

Q: You’ve worked across many verticals in your career, from music & entertainment to CPG & packaged food to digital media. What made you want to make the leap to investment management with BlackRock?

Frank Cooper: I’ve always been driven by the notion of work that actually benefits people, and expands that potential in some way. And I thought that way about music, and I still feel that way today. The best of music connects people, allows people to see other cultures. I felt that way about PepsiCo, when we had “performance with purpose,” and I feel that way now with BlackRock. And it's strange because most people when they hear financial services, particularly when it’s connected to me, there’s massive confusion right away. Because I’ve spent all my career in culture related businesses, facing the consumer, using those tools. And this one feels like it’s a b-to-b environment that’s completely different from that. I don’t see it like that. In fact if I look at it from the outside in, what I see is financial services and people’s relationship with their money is now becoming more critical than ever. And it’s a critical part of their overall sense of well being is critical in crises like the Covid-19 crisis. It plays across their relationships. So for me it was like the last frontier, in a way, when we talked about all these things from fitness to mindfulness to social relationships. But we hadn't talked about people’s relationships with their money and the impact it has on their overall lifestyle.

Q: You mentioned earlier how “The Big Short” transformed the way you looked at financial literacy and how it can be communicated. Are BlackRock’s forays into podcasts and video docuseries your Margot Robbie moment in a way, to de-jargonize the barriers to understanding financial literacy?

FC: Pieces of it are. Some of the content is targeted toward investment professionals, so it’s a smaller audience. But something like the “60 Second Docs” series, 100%. But I want to do more. I still believe one of the most fundamental things we can do to help people is to transform financial literacy. Think about this, if you compare it to the fitness movement in the 60s. You’d see someone jogging and think, “I can’t believe someone’s running down the street like this.” Now it’s intuitive to us. We get that running or fitness improves your health or your overall well-being. But no one said, “let me put together a fitness literacy course.” That didn't work, and so people who don’t want to have a fitness literacy course don’t want a financial literacy course. They want to learn, but let's learn in the way people learn today.

If you take a lesson from Reddit and the sub-Reddits and learn through the community, then yes you have a leader there but everyone’s on the stage together so that everyone learns horizontally. You have to learn by doing, make it safe and try to give it to them in short-form bites. Make it more video than written, more visual. There are things we can do to modernize our approach so that if doesn’t feel like we are teaching you a lesson. We’re helping you advance in ways that people learn today. And “60 Second Docs” is leaning into that, but there’s a lot more that we can do.

Q: What platforms (TV,  digital, paid social, newsletters, etc.) have you historically invested in the most as a marketer, and how have you shifted your media mix (if at all) over the past two months to better reach your consumer during the COVID-19 crisis?

FC: We’ve been on a steady course of shifting away from programmatic and the kind of advertising that is interruptive. We've reduced that advertising down to less than 20% across the entire organization. And we have shifted toward bolstering our owned channels. Our website has become really important to us, which seems retro in a way. But it's really important to use it as a tool to communicate but people are using it as a source of information that they can take and share with others. That shift has been critically important.

But we've been most aggressive in trying to step up our social media presence. We've gone heavy into LinkedIn, that's been an incredibly powerful platform for us, and heavy on Twitter. And mostly from the employer brand perspective, Instagram. Those three platforms have been a critical shift for us.

The main difference for the coronavirus pandemic, and the difference you'll see in our marketing, is really around events. That ranges from large scale events — we canceled every event for the balance of this year that was in-person and made some of those virtual events. And what we’ve discovered was there was an opportunity for us to get more disciplined in sharing best practices, and more disciplined in designing events. The biggest shift has been around virtual events and taking that all the way down to virtual client events. There’s a huge opportunity there, and that’s been the biggest shift in our marketing.

Q: We’ve seen a lot of marketing innovation already emerge from this time period. What innovations are you building at BlackRock that we might see more of in the next 12 to 18 months to meet current needs?

FC: There’s three things I’m focused on. Number one is how to bring purpose to life. Everyone’s talking about purpose, so we’re gonna find out who’s true to purpose and who's not. But how do you bring it to life in the company and externally? One of the things I want to continue to innovate on is connecting to purpose across strategy, innovation itself, content and experience for events. So purpose-driven action is one of the core innovations that I'm pursuing.

And the last one is the most important. I want to innovate around financial education and change what it means, how it looks and the formatting around it. And through that, help groups of people who don’t consider themselves investors, or the opportunity to enjoy the benefits of that are far beyond them. I believe that is do-able, and I believe that we now have the tools to do it, we certainly have the platforms to do it. So innovating around that is going to be absolutely critical, and very important to me personally.

Q: You made your mark in your career through your milestones in cultural marketing, whether it was through your roles in the music industry or your work at Pepsi and BuzzFeed. Do you miss that part of your career, and have you found ways to marry that with your work at BlackRock?

FC: I love culture, as you know. But what I’ve found is it applies to every industry, even those that think they’re operating from a purely scientific or rational perspective. Cultural marketing affects financial services. And you’re starting to see signs of this. We’re seeing artists like 21 Savage going around teaching financial literacy courses, or Will Smith saying that financial education is the most important thing. You have artists, athletes, celebrities, cultural figures who are awakening to the fact that if you want people to have an overall sense of well-being, their relationship with money will be critical to them. So yes, I miss it in the sense that I think it's important to solving this issue of financial education. But I’m hopeful that I’ll have an opportunity to bring that into BlackRock and to the industry overall.

Q: So perhaps there could be a moment where a 21 Savage or a Will Smith becomes a BlackRock brand ambassador?

FC: I don’t know about ambassadors, but we can create platforms that allow those voices to be heard and allow them to be seen by people who otherwise feel like they have no connection to the investment scene.