Todd Kaplan was promoted from vice president of marketing to chief marketing officer of Pepsi back in March, but he has been on the fast-moving treadmill since he moved from PepsiCo’s Water Portfolio to the Pepsi brand four years ago. 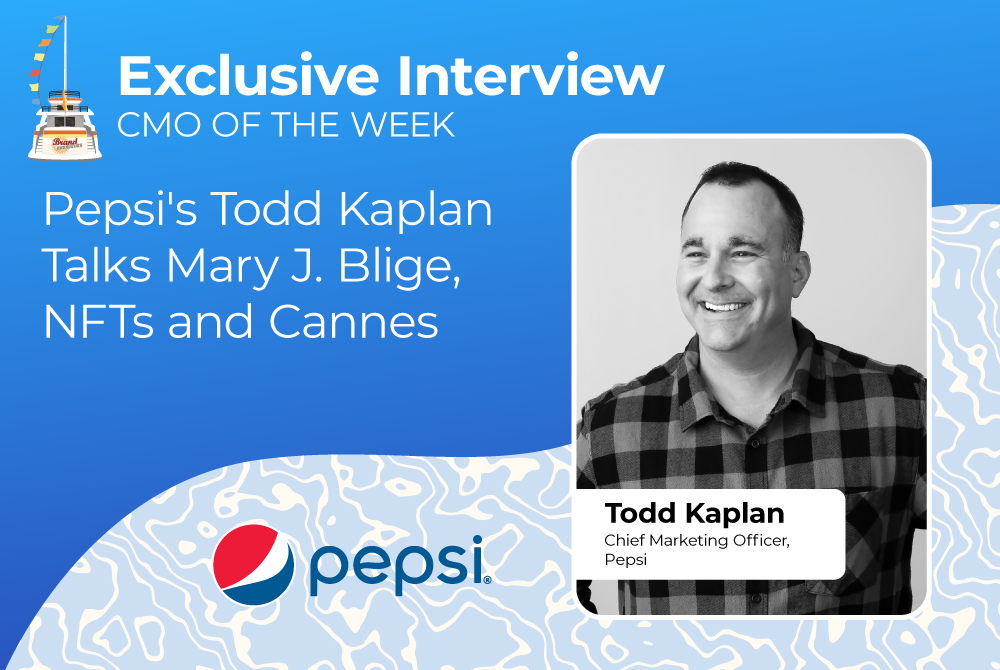 Todd Kaplan was promoted from vice president of marketing to chief marketing officer of Pepsi back in March, but he has been on the fast-moving treadmill since he moved from PepsiCo’s Water Portfolio to the Pepsi brand four years ago.

“We've had four straight years of consecutive sales growth and great business performance,” says Kaplan. “Our brand performance has been really through the charts in terms of our equity scores and cultural relevance and how much discussion we're getting around the brand.”

When he came to the brand four years ago, the company repositioned the Pepsi brand to celebrate “unapologetic enjoyment.” That rallying cry can be seen in a lot of the brand’s work over the last year, a lot of which they have submitted to the Cannes Lions Creativity Awards. The work includes the Pepsi Super Bowl Halftime, the beverage company’s Better with Pepsi campaign they did with McDonald's, Burger King, and Wendy's.

Kaplan is a juror this year and will be looking at creative from other brands deciding what stands out and resonates with the culture. He is excited to walk down to the basement and look at “all the boards of all the awesome work and just get inspired.”

“It's the best of the best,” says Kaplan of creative submissions to the Cannes Lions. “There's a responsibility as a juror to set the bar for what great looks like. As you think globally around creativity, the ability that creativity has to push us forward as a culture society, not just as a business, as well. It'll be great to see it all come about and talk about it with the other chairs, because there's just so much really great work across the board, across industries, across the globe. I'm excited to see where it all goes. I think it'll be really powerful, especially as it’s the first time that we're back in person for Cannes in a couple of years.”

Like many marketers, Kaplan is thrilled to be getting back to Cannes after a two-year hiatus from the festival. “It's one of those moments where the industry is back together,” says Kaplan. “You're seeing old friends, you're seeing great work that you're inspired by. It'll just be fun and exciting to just be back at it. And being in the south of France doesn't suck either.”

Kaplan will be speaking at the Brand Innovators Marketing Leadership Summit at Cannes next week. Brand Innovators caught up with Kaplan from his home office in the New York area to talk  Mary J. Blige, NFTs and Cannes. This interview has been edited for length and clarity.

Can you talk about Pepsi's brand mission and how this is showing up in your creative?

A few years back, we repositioned the Pepsi brand around this consumer insight that is a consumer truth that all Pepsi consumers have. It's this notion that we call unapologetic enjoyment. Basically, what we found was that Pepsi drinkers are a little bit extra. They like to indulge in these little moments of enjoyment, whether it's clapping at the end of the movie or going out to karaoke or playing hooky from work to go golfing. There's many different ways in which it can manifest. Pepsi as a brand is really trying to embrace that through all the activations we do and build out across the board. So we really stand for unapologetic enjoyment and creating these little moments of joy.

Can you talk about the idea behind the Better with Pepsi campaign, which focused on burgers last year and pizza this year?

Yes, there was Pepsi as a campaign that starts with hands you think of the role of food that food plays an unapologetic enjoyment. You think of that moment when someone's biting into a hamburger and the juice gets all over your fingers and you don't care. And you just close your eyes. In that moment of biting the pizza, you have the bite of a pizza, and the cheese is hanging out of your mouth, but you're still going for it. That's the essence of unapologetic joy around food.

We thought, what a great way to connect Pepsi as a product that goes well with so many different foods that to really reinforce our taste credentials, and the fact that we do go better with a variety of foods. Last year, we did a whole campaign around burgers going better with Pepsi and pizza also happens to be one of the most popular foods that Pepsi goes well with. There is actually a science to it – how the carbonation breaks down the grease and the citric acid interacts with the meat from the pepperoni in different ways. So we said, ‘why don't we lean in and do something with Pepsi and pizza this year around National Pizza Party Day?’

Can you talk about the Pepsi Mic Drop genesis NFT how these kinds of new media channels are an opportunity for the brand?

At Pepsi, we're always looking at new opportunities around what's next and we want to be where they are spending their time and be there in an authentic way. And NFTs have been having a moment in the last year and people are trying to figure out where things are going with Web3. The idea came up to create an NFT platform called the Pepsi Mic Drop. Pepsi has such a rich heritage in music stemming back from Michael Jackson, Britney Spears, the halftime show and everything in between.

Music is something that's always associated with the brand. We said, what if we create an NFT project that was based around music. So we created these microphones that randomly generated our work that were endemic to the space, where you have ones with different pairs of glasses, all sorts of different attributes and different degrees of rarity and we make them available for free to consumers.

Then they have the ability to sell them in a secondary market if they want. And they've already done over $10 million in secondary sales. And we received none of the profits of that. That's all for the consumers. And it's just a great way to start the discussion and we've followed it with another minting of NFTs around the Billboard Music Awards, where we minted over 375,000 NFTs for free for consumer gamers to really find ways to engage with the brand that will lay the foundation as we look to connect in a one-on-one relationship with our consumers in the future.

Can you talk about the Pepsi Stronger Together partnership with Mary J. Blige and how that supports your brand purpose?

Mary J. Blige is a force. She's incredible. And when we worked with her on this past year's Pepsi Super Bowl Halftime Show, we continued the discussions with her to say, ‘hey, you know, how can we do more around supporting emerging artists, supporting black women, supporting a lot of different things?’ And so we collaborated with her and her team to create the Strength of a Woman Festival. It was on Mother's Day weekend down in Atlanta, Georgia. It was a series of concerts, panels and discussions of things all celebrating and empowering black women through education, through enjoyment of these concerts and through connectivity. We're excited to maintain our partnership with her and continue along that journey.

What is the idea behind new product innovations like Pepsi Nitro?

We have varying degrees of product innovation from our core product offerings, what I would call platform innovation, that's permanent innovation, like Pepsi Nitro that removes a category barrier, which is the bubbles and carbonation is too harsh for some consumers. So we've infused it with nitrogen throughout to make it a smoother, frothier, creamier experience. That is a permanent innovation that's sold in retail.

We then have our limited time offerings that are sold at retail like Pepsi Cola Soda Shop, with flavors like Black Cherry and Cream soda. That's a throwback to a simpler time around soda shops. [This product] was available for sale for a limited time at the end of the year, last year. Then we have what I would say are more culture-driven product drops that aren't actually sold at retail, but they're fun to connect with the audience, whether it's Pepsi Peeps, Pepsi Maple Syrup, Pepsi Cracker Jack. These really fun and interesting flavors allow us to capture the imagination of our consumers and connect with them in new ways.

What key themes do you think people will be talking about at Cannes?

I think there's going to be a variety of things about where culture is at right now with conversations around COVID, gun violence, and such. There's always a lot of social causes that always find their way into a lot of the great Cannes work because they're really very moving. Creativity helps instigate new thoughts with a lot of consumers. You'll see a lot of what I would call cause-driven or societal-driven stuff.

You're also going to see a lot around technology innovations. I think the constant new technologies and look at augmented reality, as you look at a lot of the opportunities that brands have, and the canvases they have to paint with is much more complex and interesting, I think there's going to be a lot more there too.

What are you most looking forward to in the second half of 2022?

For the brand, I think it is just finding new ways to reinvent ourselves and continue to keep our foot on the gas and surprise and delight our consumers in new ways while growing our business.