Kate Jhaveri was just past the six-month mark in her new chief marketing officer role at the National Basketball Association when the league paused its season on March 11 due to Covid-19. 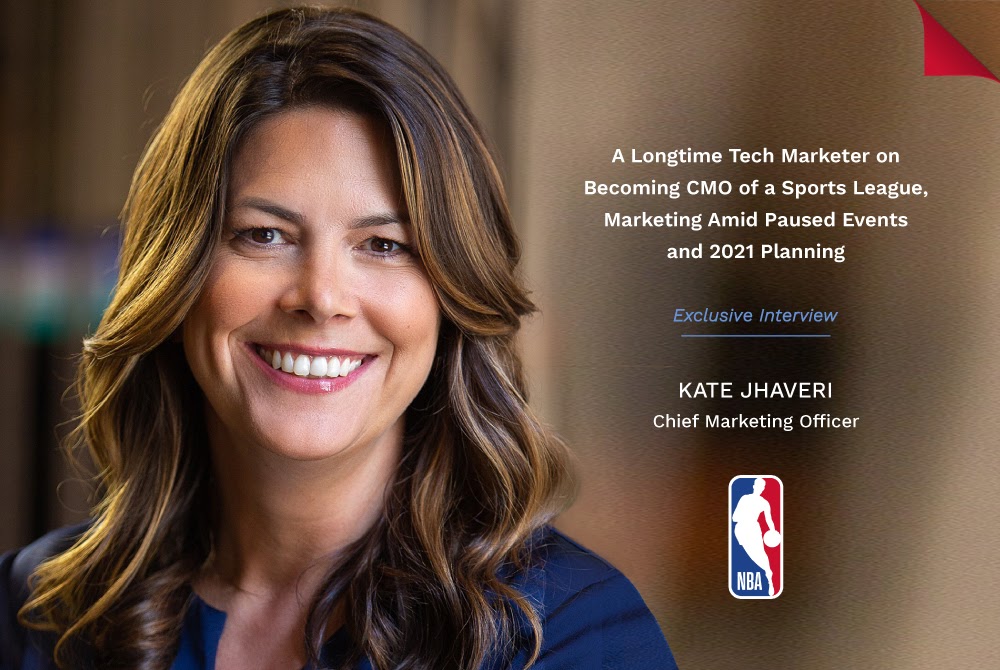 Kate Jhaveri was just past the six-month mark in her new chief marketing officer role at the National Basketball Association when the league paused its season on March 11 due to Covid-19.

By the time that happened, the NBA (and Jhaveri) had already been dealt a difficult hand for 2020. “As you can imagine, it has been incredibly emotional and challenging for us at the NBA,” says Jhaveri. “We started 2020 mourning the sudden and tragic passings of Kobe Bryant and our former commissioner David Stern. And then we found ourselves on the front line of a global pandemic and then the fight against systemic racism.”

The pandemic and subsequent shutdown of NBA games forced the league to rethink fandom and how it engages with fans. For so long, the league focused more on games and rivalries as the basis for its content and marketing strategies. But in the absence of gameplay, the league’s in-house team of marketers, strategists and content specialists pivoted to focus more on the stories of the players and teams themselves as they deal with the pandemic and their individual careers.

“We really did have to pivot in terms of thinking about how we connect players to fans without games, and to also communicate health and safety” says Jhaveri. One solution to keep the NBA in the forefront was to work with ESPN to move up the airdate of “The Last Dance,” the documentary series about the Chicago Bulls’ epic reign in the 90s.

“It was a real shared cultural moment,” she says of the series, adding that it helped fill the void of rivalry, drama and championships that were starkly absent this past spring. “The Last Dance,” became the most-watched ESPN original documentary ever “and 94% of our fans surveyed said that they loved it,” she says. The NBA also added new types of content to its digital channels such as Steph Curry hosting a trivia game.

The NBA shutdown lasted more than four months, with the season resuming July 31, albeit unlike how it’s ever been before, accompanied by a new ad campaign dubbed “A Whole New Game” that featured Issa Rae.

To resume gameplay, the league created what came to be known as the “NBA bubble,” an isolation zone in Disney World, to keep players and staff safe from the virus. Of the 30 total NBA teams, 22 teams, who were within six games of a playoff spot, came to the bubble to finish out the last eight games of the regular season, with the playoffs following quickly after. The season ended October 11 – nearly four months after the usual basketball season wraps up – with the Los Angeles Lakers defeating the Miami Heat.

This unprecedented way of playing created an entirely unique opportunity for the NBA to  develop digital and social content. “We looked at that as an opportunity to provide a window into what was happening in Orlando. We could provide fans full access to the experience on the campus through the players, the teams, the staff – everyone,” says Jhaveri. “And we had an on-site social team that captured footage both on and off the court in fun and different ways, whether that was a birthday or players on a fishing excursion or riding bikes or a vicious set of cornhole games. It was basically unfettered access to 22 teams.”

That strategy allowed the NBA to keep its young, diverse fanbase not only interested, but actively engaged at a time when basketball was played unlike ever before. It also allowed for experimentation that the NBA may not have tried otherwise. “I feel like we're learning so much about how to meet our fans where they are. This pandemic has sped up a number of the innovations that we had been working on for a while,” such as virtual experiences for fans.

Jhaveri says her favorite experiment was a virtual fan experience from August. Whereas other sports leagues put cutouts of fans in seats, the NBA chose to virtually stream fans into the NBA bubble arena as if they were ticket-holding fans in the seats.

Jhaveri joined the NBA in August 2019 after two years as Twitch’s CMO. Prior to that, she was a longtime fixture in senior roles at major tech companies, including as the head of consumer marketing at Twitter, and before that, head of brand and mobile marketing at Facebook. She also held senior roles in marketing and product at Microsoft, Apple and Dell.

Brand Innovators caught up with Jhaveri ahead of the 2020-2021 season, set to begin Dec. 22, from her home in New York City to talk about her path to the NBA, how she pivoted the brand’s marketing and content when the league had an unprecedented pause, and how she is approaching 2021 planning. This interview has been edited for length and clarity.

You came to the NBA from Twitch. And before that, you were at Twitter, Facebook and Microsoft – all tech companies. What about those roles prepared you well for running marketing for the NBA?

I've always been fascinated by communities and how communities come together.  Even early in my career at Microsoft, I had the pleasure of working on a product called Messenger, which allowed people to instant-message one another, and was among the first ways you were able to use technology to connect with your friends online. And ever since then, I have really been just fascinated with how technology and how communities come together and how technology can help make that happen, whether that's a community of family and friends, like on Facebook, or a community of interests, like Twitter and Twitch.

I've also been fascinated to see what drives different communities and their behaviors and how they engage. And I couldn't think of a better community than the community of fans of the NBA. We have some of the most diverse and youngest fans. And what we're able to do these days is to really bring that community together, not just in an arena where you're watching a game, but across all of the platforms, whether it's Facebook, Instagram, Twitch or Twitter. We have a huge digital footprint where our fans are every day, and so it felt like a really natural fit actually to come to the NBA and to really think about communities from a different side.

You were about six months into your role when it became clear around February that this virus would radically alter our lives. And then the NBA shut down games on March 11th. From a marketing perspective, how did it upend your plans that you have probably been working on since you started six months prior, and how did you pivot?

Back then, we all knew so little about the virus, but we heard from our fans a real desire to not just hear from the NBA and see all our content, but to really hear about how they could stay safe. And so we kicked off a brand new campaign just a week a week after we paused the season called “NBA Together.” We wanted to provide daily content across all of our platforms to do two main things: One was to help educate people on how to stay safe and provide resources for coronavirus relief. We also raised over $100 million to help frontline workers, provide personal protective equipment and to support our arena staff as we paused the season.

The second thing was also to provide that escape. When I think back about that time, I was really looking to free myself a little bit from what was going on with the pandemic. And we wanted to really provide our fans with the content that they had come to love from us. And so we provided an entirely new digital campaign across instagram and Twitter. It included executions like a players’ trivia contest and a variety of other ways for our fans to get connected with players who they couldn't see on the court at that time.

Our media mix changes were less about 2020 specifically than it was about me coming in with a new set of eyes and looking at our goals and how we wanted to activate our fans and the best ways to do that. We have fans who are core fans and who engage regularly with the brand, and then we have a more casual set of fans who are engaged but less so. So we have to constantly be targeting those media and our messages to the right audiences.

Between the global pandemic and a historic election, we saw more of our fans engaging around news and trying to stay up to date on health and safety and also the election. We pivoted a bit to focus on those fans who maybe were also spending time on news to bring them back to the game.

Our mix is ultimately audience-based. Young fans are more mobile and spend time across devices. So it’s really an omnichannel strategy. And then some of our older fans still do spend time on linear TV. We put our fans at the center and organize media based on the fans.

The new season is about to kick off, and in all likelihood, will be an unusual one. What are some of your overall marketing plans for it?

Marketing will start with that announcement to use the three weeks leading up to that first week, which is Christmas week, to drive that excitement and awareness. This is a different time to tip off, so we want to make sure fans are aware and excited with the run up of multiple games that week.

We’ll continue with this multi-platform media strategy to meet fans where they are. We're going to increase our approach across social and digital platforms, as we know that our fans are spending more time there. We will also be launching in a staggered fashion rather than all at one time.

Our fans really crave getting back to the game. What we saw was so much amazing basketball toward the end of last season that we want to lean into the storytelling of the matchups and rivalries and the players. We want fans to feel front and center, even if they can’t be at the games.

The word I keep using is “agility.” So given we know that the future is very uncertain right now and we're closely monitoring the current trajectory of the virus, we will stay as agile as possible as a league to ensure we’re addressing the challenges head-on as they happen.

One thing this affords us is the ability to continue the innovation we’ve already been doing. We know that less than one percent of our fans will ever be in arenas. That’s a huge opportunity to bring the game to the rest of the world. It’s one more opportunity to try to continue to innovate with tech, audio, camera angles, to continually evolve our broadcast and engage the community and we’re in constant conversation with partners at Microsoft, AT&T and Turner to evolve the fan experience. We’re very much looking at this as an opportunity to experiment and learn.

Maureen Morrison is a marketing and editorial consultant for Brand Innovators and is the founder of the consultancy Irving Park LLC, based in San Francisco.