Michelle St. Jacques jumped into the deep end on her first day as Chief Marketing Officer at Molson Coors. It was February 2019, and the Super Bowl had aired just one day prior. During the Big Game, Anheuser-Busch InBev’s Bud Light aired an ad that accused Miller Lite and Coors Light, both under the Molson Coors umbrella, of using corn syrup in its recipes. 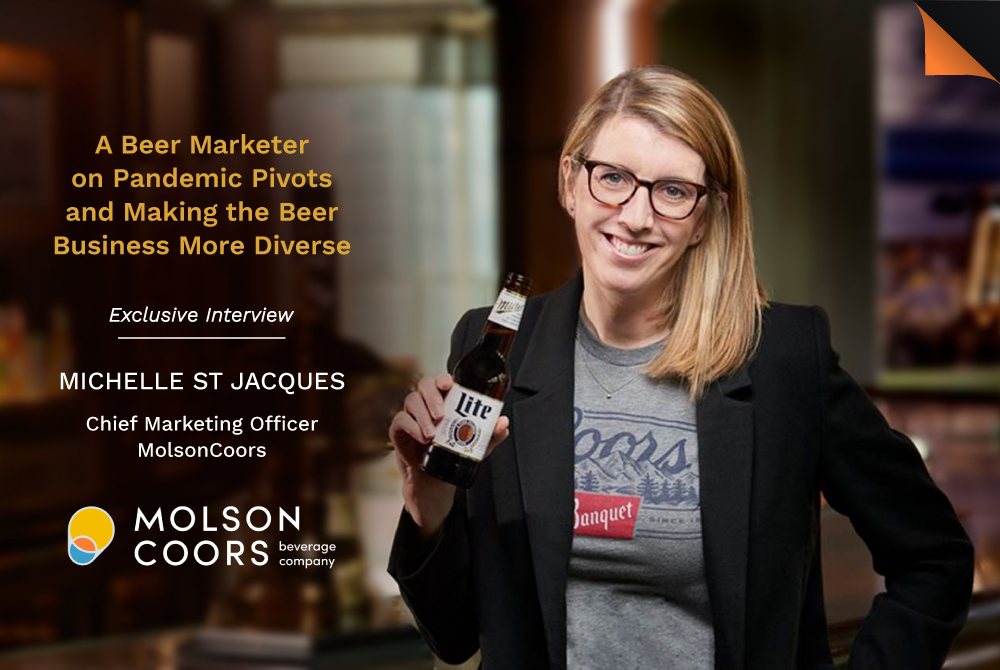 Michelle St. Jacques jumped into the deep end on her first day as Chief Marketing Officer at Molson Coors. It was February 2019, and the Super Bowl had aired just one day prior. During the Big Game, Anheuser-Busch InBev’s Bud Light aired an ad that accused Miller Lite and Coors Light, both under the Molson Coors umbrella, of using corn syrup in its recipes.

The ad sparked a protracted battle -- some would call it a “corntroversy” -- between beer companies that’s still dragging on in the courts to this day. But it served as a full immersion into the beer world for St. Jacques, who joined the Molson Coors after seven years at Unilever. One of the first moves taken in the battle under her watch included a full-page ad in the New York Times, created by DDB Chicago, that ran just days after Bud Light’s Super Bowl ad first aired.

“I’m not going to lie – it was a hell of a first day on the job,” says St. Jacques. “I remember walking into my first meeting with the Miller Lite team and DDB on that Monday saying, ‘So…what have you guys got?’ They showed me the print idea for New York Times and I was like ‘Ok, let’s go!’ It was less than 6 hours of being on the job and the team immediately jumped into action.”

While it was certainly an exhausting first day, the experience helped St. Jacques set the tone and speed for how quickly the organization needed to move in a fast-changing landscape. “I remember getting home that night, exhausted, and turning to my husband and saying, ‘This was not part of my 30 day plan’ and not being able to sleep because my adrenaline was pumping. In some ways, this set the tone for everything. It started to build the new approach for marketing at Molson Coors – we were going to move fast, we were going to be bold & take risks and we were going to build our brands in culture.”

Though she was new to the beer business, she’s no stranger to working in marketing at large, established companies. During her time at Unilever, she worked her way up the marketing ladder to become Senior Brand Building Director in Toronto, a role in which she was responsible for brands like Dove, Vaseline, Axe, St.Ives, Lever 2000 and Q-Tips in Canada. Prior to Unilever, she worked at SC Johnson in brand management for nearly seven years.

Brand Innovators caught up with St. Jacques to discuss her career path, planning around sports amid uncertainty and how her company is improving diversity efforts.

How has Molson Coors as a marketing organization differed from other companies you've worked at?

I’ve been lucky enough to work at companies I have really loved throughout my career. What I really love about Molson Coors is the people and their appetite to embrace change and try different things. The reality is that our business and industry has not been an easy one, and we need to do things differently if we want to get different results. And everyone at this company – every single person on my team – has shown so much passion for change, for taking more risks & for having grit to get things done. I think that mindset and their ability to adapt has helped a lot with everything that has happened in 2020.  They have their game faces on every day and I’m so impressed by them every day.

What learning curves did you have in your new role at Molson Coors? What surprised you?

The biggest learning curve for me was better understanding how the beer business works. It’s truly unlike any business I’ve been part of. It’s a generational business for many of our distributors and it’s incredibly complex, so I have had a lot to learn. But I’ve been incredibly lucky because both our distributor and sales partners have been fantastic about showing me the ropes. The President of U.S. Sales told me on day 1, “Michelle, you worry about getting people to want to pick up our brands – I’ll make sure we get the beer out there.”  It’s a true partnership from end to end.

How have you pivoted your marketing during COVID?

We’ve had to take a hard look at how we approach everything over the past few months. I’m incredibly proud at how fast the team pivoted and has literally re-planned everything in such a short time period. The team quickly adapted existing work and media plans to be as effective as possible. But they also created a crazy amount of new work in record time. The Virtual Tip Jar idea from Miller Lite was a 48-hour turnaround and was shot by one guy with no crew in an empty Chicago bar the night before the ‘stay at home’ order started.

The Coors Light team quickly celebrated Olive – the 93 year old diehard Coors Light fan - who asked for beer and became a PR sensation. After a much deserved beer delivery, we built on that idea with “America Could Use a Beer,” which is one of my favorite things we have done on the brand all year.  And finally, the new High Life spots were shot by Errol Morris, the famed director who’s shot more than 100 High Life commercials. He personally shot the campaign while quarantined in his home with his son. We built this culture around ‘fast messy awesome’ last year as a team and never has it been more important than now to live it every day.

How is Molson Coors dealing with the uncertainties regarding sports, especially football? How are you planning?

Like most marketers, we’re watching closely on what’s going to happen with sports. We are planning for all scenarios.  But football is an important season for us, so we have our fingers crossed.

If football doesn't go on as planned this year, would Molson Coors reallocate that ad spend and sponsorship?

It’s too early to make that call, but of course, our goal is to make sure we maintain the right pressure behind our big brands and new product launches so no matter what we will make sure that happens.

In light of the racial injustice protests, what are you specifically doing to support causes and improve diversity among employees at Molson Coors?

This is all about taking action. And we’re taking a number of them to build a more inclusive culture and increase diversity here at Molson Coors. Last month we announced Molson Coors would redirect $1.5 million of media dollars to support 23 national and local organizations dedicated to equality, empowerment, justice and community building. We are undertaking a complete review of our marketing processes to make sure we are truly living our values.

But even more importantly, I think some of the most meaningful change we can make starts from within – so we have really taken a look at how we drive more diversity in our company. We are committed to increasing representation and have implemented more diverse hiring goals to expand diverse leadership programs as examples to enable this change. I am 100% committed to making progress here. We simply need to do better.