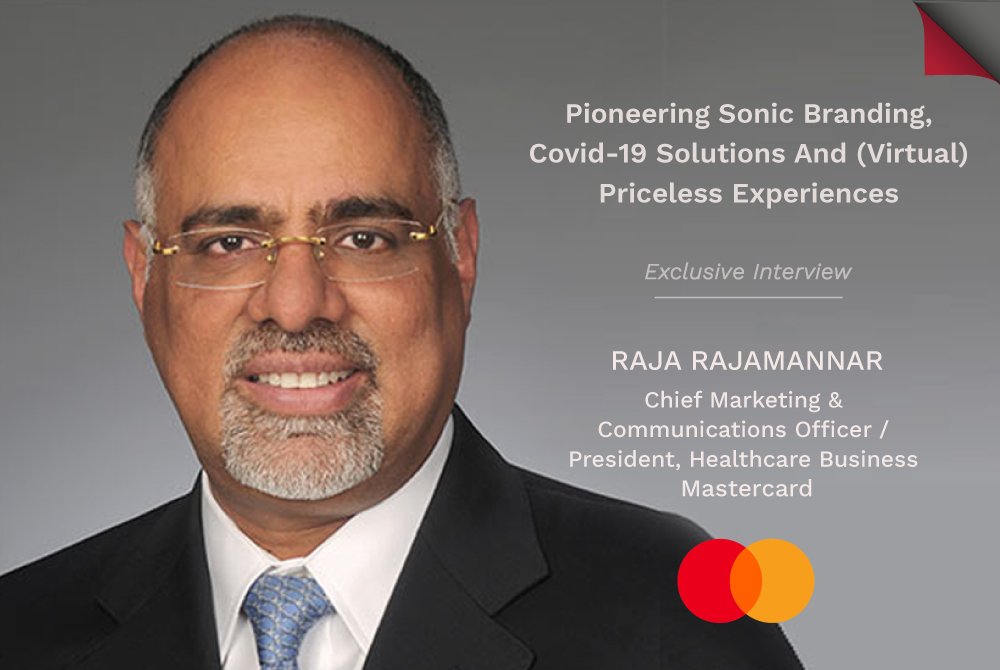 Within the first year of his appointment as Chief Marketing Officer at Mastercard in September 2013, Raja Rajamannar assessed the landscape for potential white-space opportunities in financial services marketing: the Internet of things (IoT), connected cars, autonomous cars and smart speakers quickly rose to the top of that list.

But what about screenless environments, like touchless transactions and podcasts — how could Mastercard’s brand identity come across without a visual attached?

Those insights led to Mastercard’s multi-platform sonic branding and audio strategy, which debuted in 2019 with the introduction of its first sonic logo. The result of 2 years and 2,000 iterations, the five-note mnemonic device was designed to score everything from Mastercard commercials to transactions at over 49 million  points of sale to, as of earlier this year, original music with the brand’s first single, “Merry Go Round.”

Now elevated to Mastercard’s Chief Marketing & Communications Officer and President, Healthcare Business, Rajamannar was shocked to discover during an environmental scan of the sonic branding market that no brand had executed an audio strategy from end-to-end across every touchpoint in the same manner that Mastercard had set out to achieve.

“Intel for instance had a beautiful mnemonic that airs at the end of their spots, somebody like a British Airways has a beautiful melody, an aria that plays in their ads, all the way down to McDonald’s. But we didn't see anyone who has everything end to end. We saw it as our opportunity,” he says. “It took four years of working with musicologists, musicians and studios around the world to come up with our sonic melody, sonic signature, our acceptance sound to create an entire playbook.”

Just over a year into its rollout, Mastercard’s sonic branding has already gotten some early high marks. In April, sonic branding agency Amp voted Mastercard as the No. 1 audio brand of 100 on its list companies with effective strategies in the space, outranking Shell, Apple, Google, Amazon and McDonald’s. That same month, Mastercard’s sonic strategy played a role in being named Interbrand’s fastest-growing brand for 2019.

Rajamannar will share lessons learned from Mastercard’s investment in audio and much more at Brand Innovators’ inaugural Music, Audio & Podcasting Virtual Summit on Wednesday, June 24. For more details and to register for the event, click HERE.

Of course, sonic branding isn’t the only item on Rajamannar’s agenda these days. In early March, just as the coronavirus pandemic was becoming a global issue that ultimately led to months of lockdown activity, Rajamannar and Mastercard announced a commitment of $25 million to the Bill & Melinda Gates Foundation’s $125 million in seed funding for solutions to COVID-19. The Foundation’s commitment has since expanded to over $300 million, with over $50 million already allocated to a COVID-19 Therapeutics Accelerator driven by Mastercard and Wellcome to advance preventative drug development.

Rajamannar has also helped oversee the company’s pivot from in-person Priceless Experiences at sports, music and culinary events into the virtual world, as well as unspecified reduction in its 2020 ad budget to prioritize digital and social media until live TV events can return at scale. Brand Innovators spoke with Rajamannar from his home in Cincinnati to learn more about the real-time innovations and donations he’s implementing. The conversation has been edited for length and clarity.

Brand Innovators: It’s been just over a year since you first introduced Mastercard’s sonic identity. What are some success metrics you’ve seen from the investment so far that tells you it’s connecting with consumers?

Raja Rajamannar: For any launch of a new concept, the single biggest parameter is: is it being accepted internally within the company? So that was the first KPI for us, how do we get our colleagues in the company excited, inspired and energized about this? On that metric, everyone feels proud and everyone loves it.

The second metric was, how do our partners feel about it? The banks, the merchants, are they afraid of it or are they embracing it? Which again we’re very fortunate, we had nothing but very positive feedback.

Number three was, how quickly are we able to roll it out into everything we do and control — like our advertisements, videos, sponsorships and events? So, what are we completely in charge of ourselves, is it being uniformly implemented around the world? And then, those things which we don’t fully control, how are we getting in there? When you look at point of sale terminals, when you use your Mastercard at a point of sale and the transaction goes through successfully, you hear the sound of Mastercard. So we started with zero, and today we are very pleased that it is available in more than 49 million points of interaction. That is a huge positive event for us.

Then we started launching our own music album. We released our first song in January, and we were on schedule to launch the whole album over summer, and some plans at South By Southwest. But with everything happening because of COVID-19, we have deferred the launch to the later part of the year. So it’s a little premature to talk about our music strategy, because we haven’t launched the album. But the single song that we have released has been used in multiple ways, and the feedback has been very positive. What I was particularly proud of is how my own marketing and agency folks are trying to use it in a very interesting manner.

We had Maelyn Jarmon, who won Season 16 of “The Voice” last year, mentor other singers as part of a Priceless Surprise while singing the Mastercard song, which is called “Merry Go Round.” The way the whole thing was done, the whole production, looks beautiful. This is something where nobody had commanded saying “Thou shalt use it,” this is the marketing people being inspired enough to embrace it and run with it, and come up with creative options around it.

Q: Let’s talk about the past two months and how Mastercard has responded from a marketing standpoint, as well as humanitarian through your partnerships with The Bill & Melinda Gates Foundation and others. First off, what do you think is Mastercard’s role as a force for good during the current crisis, and how has that been reflected in your messaging?

So with that said, what we said is, What are the things we can do? We said we will partner with a very critical organization - The Bill & Melinda Gates Foundation, and we started a $25 million Mastercard Impact Fund. And now we have also been able to attract other partners like Wellcome and the Chan Zuckerberg Initiative to come in. And now that has expanded to over $300 million, and $50 million of that has been dispersed to a COVID-19 Therapeutics Accelerator. There have been 19 initiatives that have been funded in the amount of $50 million so far. This will accelerate the clinical trials, the testing and the ability to come out with solutions much faster.

This is one part of it, and we created another fund of $250 million. This $250 million fund is purely to help small businesses and will be going into making a whole bunch of resources available to help them achieve a maximum benefit.

Number three is that this is the time when we are trying to reach out to small businesses and help them. We’re finding that cybersecurity is a huge concern. So we have a program called RiskRecon, to help us analyze further what is the risk vulnerability from a tech point of view and give them solutions. We’ve offered that free of cost to small businesses.

The fourth one is again focused on small businesses, because these are the folks who really keep the economy running and contribute to a huge amount of employment as well. But they don’t have sustaining power, they are the ones who are most vulnerable and impacted on society and economy. So what we did is we declared that we will reach out to 1 million women entrepreneurs through our Path To Priceless program, and provide them with mentorship, tools, resources, networking and so on. And our intention is in the long-term we’ll help 25 million women entrepreneurs, but in the near-term we want to help 1 million women entrepreneurs as a start.

On the other side, healthcare workers are at the forefront, so what can we do for them? We are partnering with a number of companies like Uber Eats in Europe and Lyft in the USA and various other companies to contribute free rides to the healthcare workers and free meals to them and their families. So we are going in a full-fledged fashion across two main areas, small businesses and health care workers. This is something where we feel we have to do it, not just as an organization but as a brand. We have the power both financially and the network power, and we want to leverage it for social good.

Q: How have you adjusted your media mix over the past 2 months, and how do you see that playing out for the remainder of the year?

Raja Rajamannar: Firstly, we’ve pulled back on our overall marketing spend, and that also translates to media spend. With the media, what we have moved a lot more toward is digital, to be able to control and scale in a very targeted, measurable fashion that we can apply to our media models. Digital has overrated compared to traditional media. Overall we pulled back, but we are keeping up some things so that once the economy starts opening up, once people start getting back to their jobs, that’s when we can get back in.

In the interim what we are doing is it's very important that the brand does not go dark. So we came up with some strategies and tactics of, how do we make sure we are visible? One for example is Priceless is all about experiences, events and ambassadors. Most of those are in-person experiences, but if people are locked in their homes, what do you do? So we came up with Priceless Experiences At Home, and we’re ranging a whole series of brand ambassadors whether it’s chefs, like JJ Johnson or golfers like Annika Sorenstam, we have MLB players, we have a whole series of these ambassadors giving Priceless Experiences to people remotely and digitally. Some of these are available to the public free of cost, some are only available to Mastercard card holders, as we have historically done. What we have done in this effort is to make sure we are in touch with how consumers are feeling, what is important to them at this point in time, and do things which are not tone deaf, which is critically important. It’s about pricelessness, and creating things you will cherish. We also have Camila Cabello’s experience coming very soon, that's going to be a huge one.

Q: Going back to your audio strategy, what role do podcasts play in bringing that to life? Have you found success with integrated sponsorships?

Raja Rajamannar: So we are doing a couple things, we are involved in a number of podcasts as a participant, we have seen the statistics around podcasts are really improving extremely well and we cannot be absent from that. Our external podcast is Fortune Favors the Bold, but we produce many in-house podcasts targeted to employees, including Inside the Circles and Changemakers. Number two from a sponsorship standpoint, we sponsor several podcasts including Work Party, as well as InCharge with DVF, and those have been successful for us. Number three is we created our own series of podcasts which we called Storylab, where we invite industry leaders to come and talk. So we have been very aggressive in this whole space, and podcasts have to be a serious part of our sonic strategy, no question.