Fast-rising financial tech app Klarna may be headquartered in Stockholm, but like many of its fellow Swedish unicorn peers Spotify and H&M, the U.S. represents one of its greatest growth markets of the past several years. In the past 12 months alone, Klarna has doubled its U.S. customer base to more than 15 million users, who use the app to pay for goods and services in installments as an alternative to traditional credit cards. 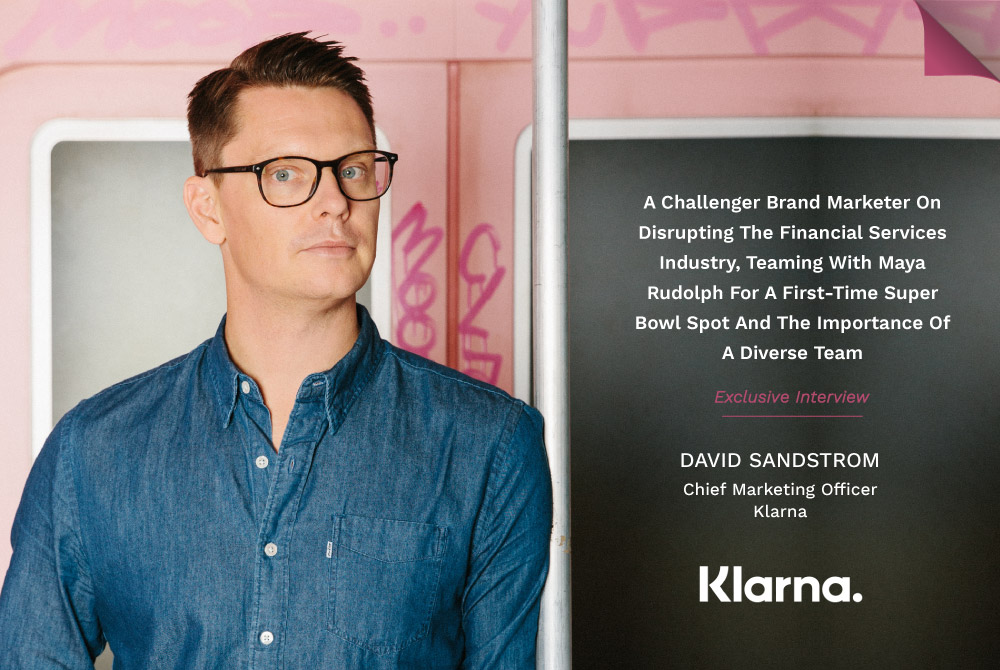 Fast-rising financial tech app Klarna may be headquartered in Stockholm, but like many of its fellow Swedish unicorn peers Spotify and H&M, the U.S. represents one of its greatest growth markets of the past several years. In the past 12 months alone, Klarna has doubled its U.S. customer base to more than 15 million users, who use the app to pay for goods and services in installments as an alternative to traditional credit cards.

So when CMO David Sandstrom began plotting his marketing rollout for 2021, he set his sights high on a first-time investment for Klarna — the Super Bowl. “We had the right strategy in place, and we were closing in on 10 million U.S. consumers at the time, which really gave us a substantial footprint,” Sandstrom says. “The Super Bowl is a good place to strengthen an awareness and relationship, not launch something completely new. We had just gone live with really fantastic partners like Foot Locker, Macy’s, Sephora and Etsy, so it was partly a celebration and acknowledgement of the success that we’re seeing in the U.S.”

The brand’s resulting spot starred Maya Rudolph in a quadruplet role as the Quarter-Sized Cowboys, giving humorous representation to the four payment periods (billed every 2 weeks) that have become Klarna’s calling card. The spot has accumulated more than 13 million YouTube views since its Feb. 3 debut, and has helped accelerate the number of users trying Klarna for the first time. “We are currently adding about 1 to 2 million users a month in the U.S., so we’re really seeing the growth there,” Sandstrom says.

Klarna’s disruptive model has gained traction by reversing the traditional bank structure, from consumer-funded to merchant-funded. “So instead of the customer paying the interest fee, the retailer does — and we’re very upfront with the retailer about that,” says Sandstrom, noting that the incentive for customers to fulfill those installments is locking their access to the service until all payments have been received. “It’s a very customer-friendly way of spreading those costs, and it’s a smart way for the retailer to actually open up their inventory to a broader set of people.”

Brand Innovators caught up with Sandstrom from Stockholm to learn more about the customer insights that led to Klarna’s Stateside breakthrough, the strategy that led to the Super Bowl buy and why “people trust Kim Kardashian for financial advice more than their bank.” The conversation has been edited for length and clarity.

Brand Innovators: Klarna had been popular in Europe for about a decade before it caught on here in the States after you joined in 2017. How did you adapt the model to better speak to the U.S. consumer?

We launched in the U.S. four years ago with a strategy that wasn’t really right and a product that wasn’t well-suited for the market. We launched with what was partly a credit product in a market where we were probably No. 58 to that party and we didn’t bring much new to that space. It was a very European product based on invoices, which basically means you buy something online, you don’t pay for it directly, you get an invoice and then you pay that invoice. We had the hopes that the market was ready for that, but as it sometimes plays out with different products, the market wasn’t ready for it. I still think it’s a fantastic product. Amazon has its Amazon Wardrobe which is a similar product, but the market wasn't ready for it.

When we did some soul searching, we saw what the market actually needed was an alternative to credit cards and an alternative to credit, basically. So we launched a product that is what we call merchant-funded. With that start about two and a half years ago, we were on a very strong trajectory in the U.S. market. So what we’re seeing is one of the biggest shifts in consumer behavior in the financial services industry for decades. People are abandoning credit cards at scale, due to the fact that in my personal opinion and what we see in our data is that people have been screwed over for decades by legacy banks and credit card companies have put individuals, families and generations in a spot that many people unfortunately will have a very hard time recovering from.

What customer data have you seen in terms of average fulfillment patterns?

The trend is quite clear, and that is people fulfill all of their payments. The absolute majority of people pay the right amount and they pay on time, and quite simply it’s because people like the product. And talking about bigger contextual things, there is something with the FICO score in the U.S. that is fundamentally broken, unfair and at the end of the day to some extent puts quite big socioeconomic gaps into society. So if we can find products and ways through our technology where we’re not as highly dependent on the FICO score but really on the relationship that we have with the consumers, I think we can build something better

What business indicators gave you the confidence to place your first Super Bowl buy this year?

For us, in all fairness, it was the right time. We discussed it the year before, but I didn't feel we were ready as an organization. I don’t think we had the footprint. There are a lot of rational arguments around the Super Bowl, but to me just showcasing to our partners, retailers and merchants in the U.S. that we're here to stay, that’s a really important signal.

If you look at the fintech industry it's filled with companies who want to build something and sell it. That’s not what we’re about. We're here to really create a legacy, a franchise, and I do think a heavy investment into the market showcases that. I also believe, as you can hear with my accent, we are a European company and I think we need to use the levers we have to showcase that we mean business in the U.S. — using cowboys, using Maya Rudolph, using the Super Bowl to really showcase that nowadays we are as much a U.S. company as we are a European company.

And then finally to the consumers, one thing that my industry has done wrong historically is building trust. Historically banks have built trust through being blue, bureaucratic, men in suits with stock photo imagery. That is the recipe for building trust that all our competitors are using, and I think it’s outdated. Being at the Super Bowl, not just in those 30 seconds but the ecosystem around it, is a fairly modern and new take of building trust. Us signaling that we’re willing to take the investment, willing to be creative and stick our neck out there, I think that tells a story about us and it’s part of the new trust gain in the U.S.

And it’s fun, looking at our data. People trust Kim Kardashian for financial advice more than their bank. Which means that the game has changed, there are other ways of doing this.

What did your media mix look like prior to this year, and will you shift to more mass-market reach to capitalize on the Super Bowl momentum?

Obviously, the game of advertising has changed. And we think of ourselves much more as marketers than advertisers. So the Super Bowl for us is an extreme outlier. Being on traditional TV, the most traditional format of them all — that really goes against how we think about marketing. We usually don’t do these big mass placements. We’re very PR led, we believe a lot in ideas, as we did things with Snoop and Lady Gaga that were driven by an idea that started in PR, internet culture and hype, rather than choosing the perfect mediums.

Looking into this year, since our budgets have changed quite significantly, this is the first year we're going to add a layer of “always-on.” I think we’ve been very campaign dependent, so having this heartbeat of communication that hits the market all the time, we’ll have that this year. But historically we’ve been very PR driven, very design driven and very trying to influence the word of mouth as much as possible.

How are you ensuring that Klarna brings a diverse point of view to its product and messaging?

If you review the things we did even before the Super Bowl, [diversity has] been at the heart of what we do. One of the reasons for that is we are a Swedish company, and that means at the core we need to be diverse and inclusive because there’s just not enough talent or people here in Sweden. We have 96 different nationalities here at Klarna, so it really comes from within.

Before you joined Klarna, you spent many years on the agency side, including four as CEO and partner at DDB Stockholm. How did that experience inform your guiding principles as a marketer?

As a consultant, the obvious benefit is that you’ve seen a lot of different businesses. And that is interesting with Klarna because we don’t take our blueprint from other banks or payments companies. It’s interesting to see us as a payment and shopping company. How can we take our blueprint from Walmart, like if they did this what would it look like? Being able to combine different business models, thinking that’s not usually combined, that’s very interesting. I think a lot of businesses are missing out on that. They’re looking at what their competition is doing, or predecessors are doing. But as a consultant, being able to see things from many different angles is one thing.

The second is creativity has really been highly valued, especially within tech companies. So understanding creativity, understanding creative processes and leading a company that combines high tech and high touch has always been very important to me. It is extremely cheesy to mention Apple, but one of the companies that was the first out with designing an Mp3 player was unheard of, and I do think when we talk about designing payment services, that’s something interesting. So taking what I learned from the creative side and applying that at Klarna — it’s a privilege to be able to do that.