Before joining Viacom CBS last October as BET’s Chief Marketing Officer, Kimberly Evans Paige spent more than two decades in the world of CPG beverage and beauty brands, including a 22-year career with The Coca-Cola Company and more recent stints as CMO at Coty and Chief Operating and Brand Officer at Sundial Brands... 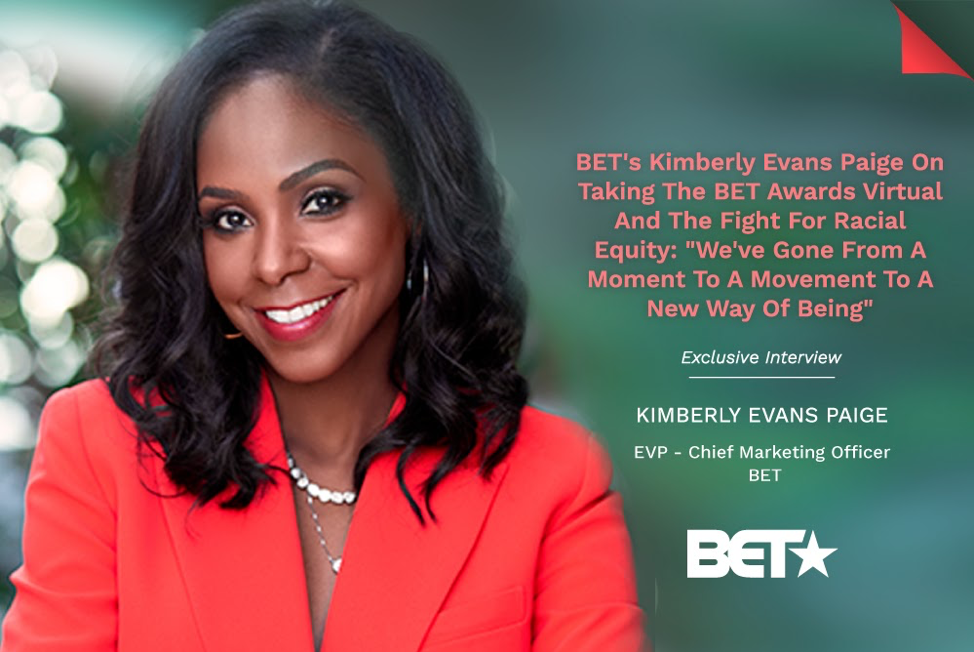 Before joining Viacom CBS last October as BET’s Chief Marketing Officer, Kimberly Evans Paige spent more than two decades in the world of CPG beverage and beauty brands, including a 22-year career with The Coca-Cola Company and more recent stints as CMO at Coty and Chief Operating and Brand Officer at Sundial Brands.

So when it came to adjusting to the new tempo of working for a media company in 2019, she knew her days of 18-month planning cycles were far behind her.

“There are no 18 months of anything in media,” says Evans Paige. “Even transitioning from beverages to beauty, there was a pace of innovation in both those environments. But in the media space, forget about it. It is so dynamic, it is so fast-paced and incredibly competitive, but you really feel like you are living day to day because you never know what's going to break.”

That pace has only accelerated during the past four months of what Evans Paige describes as the current “panolution” moment - when the coronavirus pandemic overlapped with the black equality revolution that’s still playing out in police brutality protests and the call for more diversity within corporate America.

But BET, which celebrates its 40th anniversary this year, has a long, day-one history of standing up for its community. “BET has always stood up and said, ‘What can we do?’” says Evans Paige. “Our mission is to educate, entertain and empower. So we certainly think about things like COVID and all the social inequities, and we have to say, ‘If not us, who?’ While other networks are clearly developing black content and we know that’s increasing, there's a deepness in our connection to the community. And that’s one of the best parts of BET as a brand.”

That long-standing commitment was reinforced with the 2020 BET Awards, which aired June 28 and became the first high-profile awards show to go fully virtual, with blockbuster levels of remote production for performances from Megan Thee Stallion, John Legend, Alicia Keys, Lil Wayne, Roddy Ricch and many more. The live telecast reached 3.7 million across airings on BET, BET Her and, for the first time, CBS, extending the BET Awards’ six-year streak as the most-watched awards show on cable.

BET is also expected to be among the first networks to resume production on scripted television shows while adhering to new COVID-19 protocols of health and safety. Tyler Perry, who kicked off his landmark multi-year deal for original programming with BET in 2019, is prepping a “Camp Quarantine” at his flagship studios in Atlanta to help bring upcoming seasons of shows like “Sistas” and “The Oval” safely back to air.

Brand Innovators caught up with Evans Paige from her home in Atlanta to learn more about her first nine months on the job, BET’s ongoing COVID-19 relief efforts and why the current chapter in the fight for racial equality represents a “new world and a new way of being.” The conversation has been edited for length and clarity.

Brand Innovators: How would you describe your first 9 months with BET as CMO, given the overlapping events of the COVID-19 crisis and the resurgence of the Black Lives Matter movement?

Kimberly Evans Paige: I literally came into BET during what I would say is probably one of its biggest moments in history. Our president Scott Mills had just brokered an amazing multi-year deal with Tyler Perry, so we were launching that content at the same time that we launched BET+, which was our first streaming platform. That in and of itself was literally hitting the ground running.

And then fast forward to the spring and we had an amazing opportunity to launch “Twenties,” which was Lena Waithe’s new show. It’s just a jewel, quite honestly, such a special show — it’s the first masculine-presenting African-American [LGBTQ+] female-led show on BET. Lena is just masterful in the way she develops characters, so we really wanted to lean in on so many angles and dimensions of the show. Being able to work on that has been a really robust way to step back and think about the audience and just the specialness and magic of the show.

And then there’s the moment we’re in now, which I’m calling a “panolution” - we went from a pandemic to this revolution. What’s interesting for us at BET is there's such a level of understanding of the black community. We’re celebrating 40 years since the launch of the network, we knew probably 3 to 4 days into the pandemic that our audience, our community was going to be really, tragically hit.

So we started talking about what we should do, and we quickly created what we called “Saving Our Selves,” a COVID-19 relief effort to illuminate the disparities about how the black community has been hardest hit. It was this perfect storm of understanding all the underlying conditions, the socioeconomic backdrop, and the fact that when our nation started working from home, only 20% of the black community really fell into that category of being able to work from home.

Over the course of 10 days, we ended up raising about $18 million in partnership with the United Way. We were very clear that the resources would be directly sent to about 44 organizations in what we were calling the hardest-hit areas in cities with high-skewing African-American populations like L.A., New Orleans, Chicago, Detroit, Atlanta and New York. To be able to push those resources directly to the frontlines was a proud moment for the brand, and the number of sponsors that stepped up, it was just really inspiring to see.

Last month’s BET Awards were critically praised for setting a new standard of remote production during COVID-19. How far in advance did you start planning?

The revolution was going to be televised. That’s the way we’re summing it up. The BET Awards quite honestly is the largest celebration of black culture, and it’s the purest manifestation of what the BET brand is. Each year, we have this unique responsibility to put something amazing out in the marketplace. This year was also our 20th anniversary of the BET Awards, so going in the table stakes were already really high. And quite honestly, we all assumed that it wasn’t going to happen. We have a live event called the BET Experience that surrounds the award show every year in L.A.  for three and a half days, and we clearly decided that wasn’t going to happen so we made that call pretty quickly.

The awards decision was made six and a half weeks out from the airdate. The BET Awards has always been this amazing convening for three hours where it's all about black love, black joy, black pride and black power. And with all that was going on in our country and our world, we felt that our culture was just too big to be canceled. That was the thematic that we all rallied behind. And thanks to the brilliance of our EVP Connie Orlando and producer Jesse Collins, it felt seamless in terms of integrating the show’s content into the current cultural context, and it’s being applauded as one of the best awards shows ever.

At Brands Across America last month, you mentioned that holding companies accountable for diverse leadership was one of the aspects that felt different about the current racial equity movement we’re in right now. What other elements feel different or like signs of progress to you from previous movements and protests?

It feels like we’re on this journey that’s gone from a moment to a movement, and I think we're now in this space between movement and kind of a new future and a new way of being. I think it’s gonna be difficult to go back, and I don’t know if I could have said that on the heels of other things that have happened by way of the social inequities and the racism. This time it’s not just black voices, there is this groundswell of young people, people of all races and backgrounds, who have joined in and in certain instances are walking alongside and taking the megaphone and yelling the loudest. And I think that is what will make a difference. For us at BET, we’ve always had this dual mission of content and community. It really is amazing to see this seismic shift that’s happening. It will become a new world and new way of being, that is definitely my hope for my kids.

If anything, this movement seems to be about setting a new standard for what the status quo of diversity and inclusion looks like.

And you’re seeing companies doing the right things by making really bold statements. But then the statements are developing into real action plans where it says “Our leadership team will look this by this date.” We always talk about how objectives have to be smart and measurable, and I think what you're seeing now is an accountability to take a position then show how you are going to support this way of being as we think about the future of America.

BET+ launched just as you started as CMO last September. How is the service doing so far - what does the audience look like compared to BET linear?

BET+ is doing well, it’s pacing well and above and beyond our forecast. It’s now the #1 streaming platform for black audiences. The beauty of now having this platform is the notion of being intentional about meeting consumers where they are and really understanding and recognizing how content is being consumed. The GM on that business, Devin Griffin, is super smart, he comes from Netflix and understands the programming and the platform.

All indicators are north and we’ll continue to really lean in on it. It was very bullish, quite honestly, because it came out the gate at $9.99/month. What we’re trying to do now is think about how we can cross-promote across all our brands, whether it’s BET or BET Her, and how we bring consumers in. What's their journey?  What growth looks like for us is also lovers of black culture. Not just black viewers, but the population that really loves and supports black culture.

Resuming production remains very uncertain for the vast majority of TV shows. How’s your content pipeline looking, and can BET+ help you fill some of those anticipated programming gaps?

Everyday we’re still waiting to learn more about what’s going on. For our gospel show “Sunday Best,” which is in its 10th year, we were two weeks into production when we had to shut down, so you’ll see that pivot to virtual. With our other shows it’s a wait and see. Obviously, first and foremost we want to ensure that everyone is safe and healthy. It’s a week by week assessment, but some writing rooms are being set up, and the writers are busy working.

I think Tyler Perry’s scheduled to start producing in two weeks. The actors are being tested everyday, and quarantining on site. We were just joking about how it would be interesting to have a show about how the show is made. They haven’t started yet, but it will be one of the first to go back.

We’re looking at BET+, we’re airing “The Chi” from Showtime and we’ll also do a lot of acquisitions to fill in the gaps. Right now, fingers crossed we’re OK. We have a really strong line of sight on the balance of the year.