One of the biggest events every year in Boston is the Boston Marathon, held every April. But due to COVID-19, 2020 will go down as the first year the race, which starts in suburban Hopkinton and ends on Boylston St. in Boston, was canceled in its 124-year history. (The race will be held virtually through a series of events in the second week of September.) 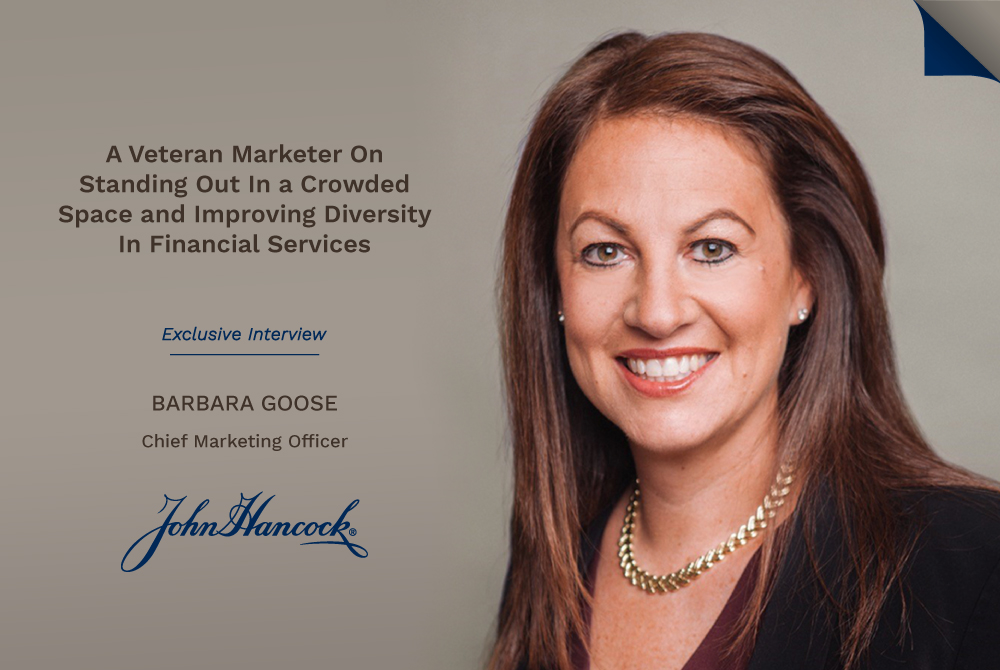 One of the biggest events every year in Boston is the Boston Marathon, held every April. But due to COVID-19, 2020 will go down as the first year the race, which starts in suburban Hopkinton and ends on Boylston St. in Boston, was canceled in its 124-year history. (The race will be held virtually through a series of events in the second week of September.)

Such a large change in iconic events, of course, means CMOs at brands that pay a hefty fee to sponsor them must rethink their plans. Barbara Goose, chief marketing office at John Hancock, is one such CMO, given the financial services company is a lead sponsor of the Boston Marathon.

At first, the race was postponed from April 20 to Sept. 14, but as it became clear that COVID-19 was not going away anytime soon, the live race was canceled in May. “For us, the dollars look very different this year. But when you've been partners for 35 years, you work things through,” says Goose of John Hancock’s partnership with the race.

How the Boston Marathon looks next year is anyone’s guess. But in the meantime, the brand has been working on its partnership with the Boston Red Sox, as a truncated baseball season began in July. John Hancock is a sponsor of the team and its name is perched atop the scoreboard at Fenway Park. But this year, they won’t see it or the Red Sox in-person through at least September, as large gatherings are still on pause in Massachusetts.

But that doesn’t mean all is lost. “We applied a different lens to this year, which we worked through with the Red Sox,” says Goose. Although the partnership was certainly scaled back from what it looked like during previous baseball seasons, it still has a digital and social presence. Goose says that the Red Sox incorporate the brand into social posts and it continues its longstanding “Hats Off To Heroes” effort, which honors veterans. “We know this season is the strangest one ever and we’re doing things that work for both sides,” she says.

Like nearly every other brand, John Hancock’s marketing plans for the year were thwarted once it became clear that COVID-19 would cause most of the country to shelter in place. The brand pivoted away from a big brand campaign it had planned (more on that below), and instead leaned further into digital. “We pulled back spend significantly. We put stuff on hold. It’s easier this year to get approval for things directly tied to sales. The pure brand plays is just harder in this environment,” she says.

Some of its digital efforts include a women-focused campaign with programmatic buying and a content partnership with The Skimm, a media company targeting women. The brand, Goose says, is also relying on video and streaming, but is not doing any linear TV ads.  “As we target younger people, that’s the model. OTT and streaming are what makes sense for that group.”

Goose, who has 150 people on her team across communications, events, brand, digital and analytics, came to John Hancock in 2016 after serving as global CMO for real estate startup Altisource for 2 years. Prior to that, she spent more than 14 years at digital agency Digitas, working her way up on the General Motors account and eventually led the Boston and Detroit offices for the Publicis Groupe agency.

Brand Innovators caught up with Goose, who is based in the Boston area, while she was visiting family in Connecticut to discuss her career path, how John Hancock stands out in a crowded  category, how the brand pivoted during COVID-19 and how the company is working to fight racial injustice. This conversation has been edited for length and clarity.

You were at Digitas for about 15 years. What made you want to go client side, and how has agency life helped?

I like to say I grew up at Digitas. Early on I worked on direct mail and then later on, through working on digital transformation, I had the opportunity to work on General Motors. At some point I led GM, and then led the Boston office and the Detroit office. Like many big agencies, there was pressure on margin and getting results with less and less. And you have to pitch new business like crazy.

So I was eager to do something new and build something from scratch, which was the opportunity i had at Altisource --  It was an opportunity to be hands-on, to innovate in an online real estate product. I had more control of solving problems and implementing plans.

You’ve been at John Hancock since 2016. How has your strategy and focus changed during that time?

There’s been this trajectory since I've been here where we are frequently focused on the customer. We started growing a team of not just UX people, but human-centered design people that have the ability to evaluate our situation and map out opportunities. We rely on that type of analysis thinking, on different parts of the customer journey, and look across the market, and come up with a fix, which helps us come up with the biggest opportunities.

I grew up with the big campaign way of thinking. It’s not that we don’t believe in having an always-on mindset -- we have that mindset. But at the same time the iterations we’re able to make over time have become more important and more impactful for the business.

Financial services can be a crowded space. How does John Hancock position itself to stand out in this market?

It’s a two-part answer. When you talk to people and do a lot of research, people connect our brand with trust. We think our job is to grow from there and add a whole set of different qualities that bring the brand to life for younger people. We stand out bc we’re not designing products out of the gate--we’re listening to customer insight out of the gate. If you’re smaller, you have to be smart, targeted and relevant. We do analytics, we do test-and-learn. We’re constantly optimizing.

The other way I was surprised when i moved here was that even if we’re not in the top 10 of any category we sell  across -- insurance, investments, advice, retirement -- there is so much money out there that there’s enough for even smaller players to succeed. A lot of our business is done B-to-B. People value the consistency of the brand promise, versus going for a bigger company, people may be forgotten. In our retirement business, the smaller businesses are where we do the most business. And it’s because we’re not the biggest in the market.

How has your media mix changed this year, given COVID? For example, in 2018 the company moved away from TV (80% was on linear TV before then.) Have you moved back to linear TV with everyone home?

Overall, we’re much lower in TV. When there’s less spend, TV will always be the first target. This year we had a campaign ready to go, it would have had a TV component, but it was not the right voice. We really had to pivot. So we’ve had some small things in-market. We’ve had some targeted digital plays. But overall, we just pulled back.

Some of our competitors were out there and are bigger and we weren't going to break through with that. We weren’t going to have as much to spend as them, so it didn’t make sense to go halfway on it. But we strongly believe in brand building. Brand advertising has a strong pull and we’ve done studies to show it has a robust return, which has allowed us to convince CFOs and other people at the table to spend. Ultimately, we still believe in a very strong digital foundation, with TV and radio over that for greater brand return.

But we’re going to continue to do smaller plays. We want to step back, re-evaluate and get it right for 2021, or at least try to.

Can you talk about the campaign that was supposed to go out this year?

We had a more rational play planned to go to market, but then COVID hit. It received strong marks in research and testing, but it was about helping people plan their futures. It was called “Plan so you can.” We didn't feel like it was the right tone because it wasn’t focused on the time and didn’t have the right, empathetic voice. When people were getting sick, unemployment was higher and higher and parents had to take on homeschooling, it just didn't feel like a time to try to help people plan finances. We wanted to switch to a tone of “Let’s get through this, we’ll be there as you need us.”

Since then, we knew we needed to find a voice to come through in the marketplace and show we were different. Even though there’s so much negative out there, we can do more positive things over time, and the way we’re going to do it is different.

There is a lot of interest in diversity and inclusion. How are you working to ensure that the company is inclusive in its marketing and services it offers? Are you able to take steps yourself to hire more diverse employees?

This is something we care a lot about. Other companies say that, too, but the difference is that instead of just writing a check, we feel an obligation to act and do things differently. Our global CEO has made public claims about what we plan to do. Overall, we’re looking to do more with actions than just donating.

There was a lot of conversation internally already around making sure we listen to diverse voices and achieve more diversity. We turned that up a lot this summer and a number of us went through programs and social identity discussions. We’ve also changed recruiting and how individual teams are formed. I feel an obligation to grow a more diverse team. We have to find different ways to bring in more people. We’re committed to that locally as well as globally across our offices. We’re looking to do more with actions than with just money.

How about the marketing -- are you looking at ways to reach more diverse people or include more diversity in marketing?

We’ve always had some level of a lens on that. Because of my agency experience, we’ve been conscious of that. But in terms of the number of people we reach and who we reach, we are looking to expand. It’s not about people with current wealth, it’s about helping people generate wealth.