Cesar Gueikian spent 20 years in the world of private equity before taking on his first marketing role as Gibson Brands, Inc.’s first Chief Merchant Officer in October 2018. The role was created as a result of an investment opportunity to save the iconic, 126-year-old music brand 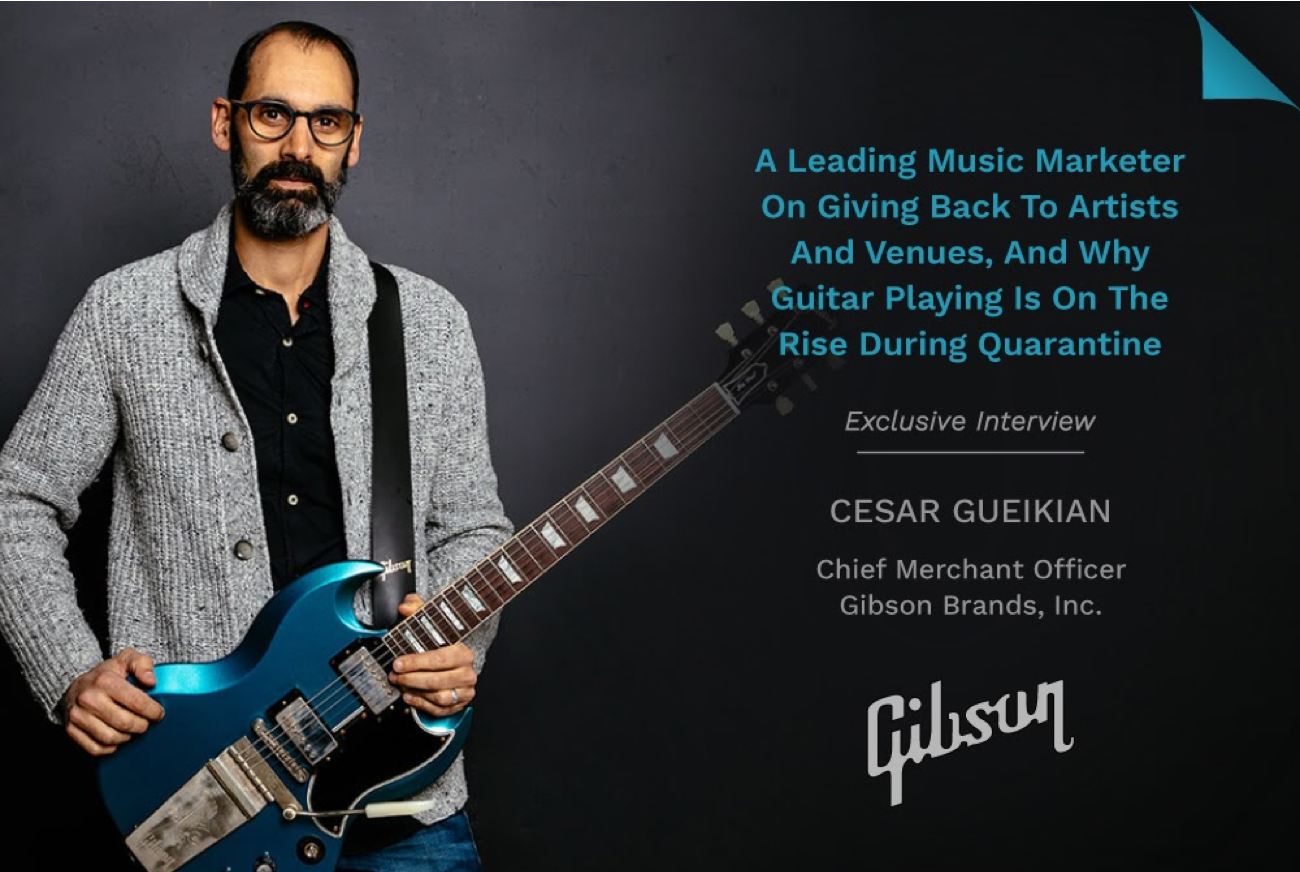 The role was created as a result of an investment opportunity to save the iconic, 126-year-old music brand from financial duress coinciding with his life-long love for guitars. A part-time musician himself, Gueikian has over 110 guitars in his personal collection, including 60 at his home in Nashville near Gibson’s headquarters and an additional 50 at his vacation property in Aspen.

“In 2013, I started buying up the company’s debt through my personal investments and watching what I would consider mistakes being made with such an iconic brand and a diversion from Gibson’s core which is an iconic past centered on guitars,” says Gueikian, a veteran of Deutschebank and UBS who eventually helped staff the company with its CEO James Curleigh and Chairman Nat Zilkha before creating the role of Chief Merchant Officer to bridge the company’s product and marketing channels.

“I felt an amazing opportunity and obligation to restore that history and be a good custodian of the brand. It’s the only company where I would have done this and it’s a merger of my biggest passions which are music and the Gibson guitar with my business background.”

Now 20 months into his new role, Gueikian has made modernizing Gibson’s products and manufacturing a huge priority, as well as original content to bring musicians and fans into the company’s new chapter. Streaming channel Gibson TV has already unveiled 10 different series of original programming since debuting in January, including “Icons” with Jerry Cantrell and Black Sabbath’s Toni Iommi, and “The Process,” a 15-episode series detailing the guitar-making at Gibson’s Nashville factory.

Brand Innovators caught up with Gueikian from his home in Aspen, surrounded by a dozen of his favorite Gibsons, including acoustic guitars like Hummingbird and Songwriter, an original 74 Les Paul and a couple Flying V’s. Gueikian detailed his path from private equity to marketing, the company’s rebound from bankruptcy and the importance of philanthropy for the music community during the Covid-19 crisis. The conversation has been edited for length and clarity, and features additional quotes from Gueikian’s talk at Brand Innovators’ first Music, Audio & Podcasts Livecast on June 24. Check out the archive stream of that event HERE (password: biLivecast0624.)

Brand Innovators: You’ve never worked in marketing prior to your role as Chief Merchant Officer with Gibson. What drew you to this opportunity?

Cesar Gueikian: A major part of my 20-year business career has been looking at great brands with great products and great heritage, and seeing what you can fix by re-establishing the capital structure and refocusing the company at its core. I started doing that and I reached out to a very dear friend of mine Nat Zilkha at KKR, who I had done a lot of great transactions with in the past and full disclosure, we play in a band together called Urban Society. I called him and said “Divorce yourself from your emotional connection to this scene,” and KKR ultimately became the largest bond holder.

And then we reached out to JC, James Curleigh, who was at Levi’s at the time and we asked him to join as our CEO. I was wearing my shareholder hat at the time and he decided to join us and both Nat who’s now our chairman and JC asked me to stay. And together we created this concept of Chief Merchant Officer. So I handle product development, the Gibson Lab and our constant pursuit for innovation, our product development team, our brands and our categories. I established the Gibson Lab to continue to drive innovation, and I handle marketing globally and I handle entertainment relations globally.

So I ended up staying. This is the only company where I would have done this. I’m a surfer, I'm a dirt biker, I love heli-skiing, extreme sports. But bring me any brand where I have some kind of association and ask me the same question, and I would have said no. But Gibson is a completely different animal. It’s 126 years of shaping sound across genres of music, across generations. It’s American culture taken global, and it’s had more influence than any other brand in people's lives and how music has been shaped, recorded and performed live.

What shape was Gibson’s business in when you assumed your role in October 2018, and what signs of progress have you seen since?

Gibson was in a self-inflicted situation of trouble, and it was because it went outside its core by buying consumer audio businesses that have nothing to do with our iconic past centered on guitars. So that was the thesis that we used as a starting point, which has been a constant theme in the past in terms of looking at companies that were in trouble. As everybody now knows, we put the company in bankruptcy chapter 11 reorganization to be able to dispose of the noncore assets and convert the equity to come back as new owners with the management team. It was a restructuring, coming out of this process, and we always like to say that was Gibson 1.0.

Gibson 2.0 was born November 1, 2018 and onwards where now we have a clean company with a clean balance sheet and an incredibly healthy situation with a new strategy of management and a new strategy of actual product. It all starts with the product, and we had a major milestone ahead of us which was the National Association of Music Merchants (NAMM) Show for January 2019. JC and I talked about this constantly and many nights I remember, we were either gonna show up with a relevant, new compelling strategy and portfolio and guitar architecture at that NAMM Show, or we were not going to show up at all.

We couldn’t call them and say “Hey, we can’t make it” because it’s a 100,000 people-plus trade show every year. We can’t call them and say “we need three months, can you postpone it to April?” So we decided we were going to make that deadline and work first on fixing our guitars. So we went back to our classics and our DNA with an original collection that reflected a good representation of the 50s and the 60s. And then a modern collection that was going to be a new representation of better quality with new playability and new entry points.

In addition to updating your manufacturing process, you’ve invested in original content with Gibson TV and artist partnerships. How have those efforts helped you refresh Gibson’s long history in the music community?

We recently launched the Gibson Alliance, and we have about 50 icons including Slash, who’s our Gibson alliance chairman. And then for future icons, we launched the Gibson Generation Group, “the G3s” we call them. They are all under the age of 20, and they’re all amazing musicians and guitarists from all around the world from different backgrounds and genres of music. So between Gibson Alliance and the Gibson Generation Group we are now able to reach artists and show we’re not just saying it but showing that we are artist-first, and that is the new Gibson culture.

By virtue of doing that and bringing artists closer to us and working with them and supporting them in every way we can, that gets amplified in ways that you could have never imagined. They are our biggest and best ambassadors out there. If you look at Jayden Tatasciore, he’s 11 years old and from Australia, so all the way from him and everybody in between up to Slash, Tool’s Adam Jones and Jerry Cantrell to Cat Stevens and Sheryl Crow and Joe Bonamossa and Tony Iommi and Richie Faulkner, Lzzy Hale, Jared James Nichols, one of our younger ripping guitarists. We don’t have to choose who we work with, all of our artists across every genre of music have all been influenced by one of their idols who played a Gibson guitar. And it could be an electric or acoustic guitar, it could be Tom Petty or Jimi Hendrix who influenced them to play.

Thousands of musicians have been largely out of work since the Covid-19 crisis shut down touring and in-person studio sessions. What are some efforts you’ve overseen to provide relief to your network of musicians?

The first thing is we made a very large amount of our overall inventory available to our artists from our artist loaner program. In most cases, their instruments got caught in some touring rig and they literally didn’t have access to their instruments, so we had all those instruments placed around the world to help musicians generate income from their homes through streaming and other means.

We also have been a major partner to MusiCares and their Covid-19 relief fund. And we’ve done partnerships with Rolling Stone to generate funding for artists. We’ve done things through Gibson TV, and we were the biggest contributor to the Apollo Theater’s benefit concert [on June 4] which was working to support artists in a very major way. We worked with Gary Clark Jr., Celisse Henderson, The Roots’ “Captain” Kirk Douglas and many others. It was going to be a physical event in April in New York, so obviously we had to pivot into doing it virtually. We were able to get an amazing community of artists to participate in the campaign, and we raised over $1.2 million on that one single night.

We’ve also launched a couple things like “Homemade Music,” where we’ve had over 300 artits participate through Gibson TV where we’ve helped them generate paid livestreams. We raised a lot of money through that program that we’ve ended up matching and donating to the Covid-19 funds.

Then we launched Guitar Of The Day and when we launched guitar of the way we were able to get other partners to donate equipment and amplifiers and pedals cool effects that we auctioned off at the end of April and we raised around $52,000 out of that rig, and Spotify matched that as well.

We are incredibly lucky as a company. When you look at the past and how major artists have been a part of the history, from Elvis and John Lennon and Paul McCartney and rewind back to Robert Johnson and rewind back to Nick Lucas, they all played Gibson guitars and they’ve influenced everybody we’re working with today. So we take that very seriously, and I have an amazing team led by Beth Heidt to help oversee that artist-first culture.

Have you seen an increase in guitar playing and education during quarantine as people have more time to hone their craft?

I can only speak about what I’ve observed with us, but demand for us is up quite dramatically across Gibson, Epiphone and Kramer. The challenge we had is we had to shut down our factories in Nashville for two months. So demand went up, we sold out of everything we had online very quickly, our dealers sold out of everything they had fairly quickly and we didn’t have time to replenish that on time to meet the demand. We started about three weeks ago ramping back up production and find ourselves in a pretty severe back-order situation.

So you’re the Clorox wipes of music. A good problem to have right now.

I don’t know if it’s that dramatic, but it seems like a lot of people wanted to play guitar at home.