Doug Martin has a lot on his plate at General Mills. 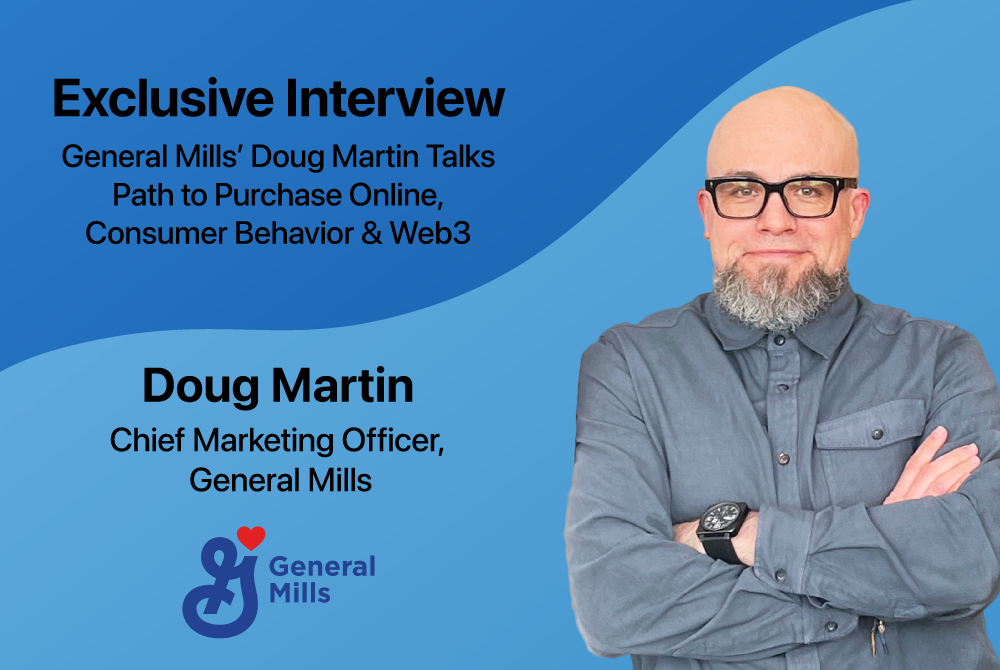 Doug Martin has a lot on his plate at General Mills.

In his current post as chief brand and disruptive growth officer, he runs the traditional brand building function and also runs a disruptive growth division where he is tasked with keeping the company’s portfolio of brands –which ranges from cat food and Cheerios to tacos and flour – relevant in today’s culture.

“I always think I came to General Mills out of my MBA 16 years ago, because I thought it would become the place I could be the best marketer I could be,” says Martin. “I want to make sure that the next person who is graduating feels like we are a place to come to be the best and that when people are here, they feel like they are growing and learning and adding to themselves.”

“Making sure that our brands are revered and showing up in consumers’ lives in a way that adds value to them. Underscoring both of these things is the constant need for modernization and evolution,” he continues. “You never stand still. People aren’t going to be satisfied with the training they are getting today if it is the training they got 10 years ago, so continuously moving the company and our brands into the future.”

The evolution has included making rapper Ice-T the face of Cheerios, as part of the brand’s push to promote the oat-based cereal’s heart health benefits for people trying to improve their health. And Blue Buffalo tapped ESPN host and pet parent Nicole Briscoe for the “One Taste is All it Takes” campaign to promote its cat food as both a tasty and healthy option for feeding cats. Old El Paso opened an Old El Paso Taco Shop in the LeBron James House 330, a non-profit that helps deliver resources to families in need, to offer resources to families in need.

As a company, General Mills aims to serve the world by making food people love and focuses on creating experiences that solve problems and deliver joy. This can be on a grand scale, aiming to tackle global issues, or something as simple as a product innovation that offers better experiences.

“Sometimes it's big stuff, like Box Tops for Education, trying to close a gap on equitable education funding. That's a huge problem. No one's gonna solve it tomorrow, but we're working on it. Our digital app, we now have the ability for people to identify Title One schools, which are underfunded schools and direct their donations that way,” explains Martin. “Sometimes they're small problems. Like our old El Paso brand had a huge hit in Australia and Europe with tortilla pouches. The problem is, I don't want my tortilla fixin's to wind up on my shirt. That's a problem too. Both are relevant. And we want to continue to work on both of those types of things.”

Brand Innovators caught up with Martin from his home in the Minneapolis area to talk innovation, diversity and how the company shows up authentically in places where its core audiences spend time. This interview has been edited for clarity and length.

How has the growth in ecommerce changed how people shop for groceries?

One of the things that we've seen is that it's just a different path to purchase online. You literally have a path that you walk through a store in order to do your grocery shopping. Oftentimes, we'll hear yogurt is the last thing on the list, because people want to get the cool items last. So what we've had to do is really get smart about how that behavior changes when we move online. Across the board, what you see is less browsing. When you think about your grocery store experience, you see what's on an end cap and that might not have been in your mind, but there is a level of sale ability by viewing that.

We've had to be very thoughtful about innovation in particular, and how are we going to make things discoverable online? I's also consistently about experimentation. We've continued to partner and think about things. We were the first CPG to do a partnership with Gorillas, which is one of the uber-fast commerce delivery services, where you can get your products in 15-20 minutes. We did a special Taco Tuesday promotion with them, and they increased their sales by around 600%. We have to be continuously out there looking for partners and ideas, because the world is evolving and we need to evolve with it.

Is there a role for emerging technologies like the metaverse and NFTs for General Mills?

Absolutely. I'm a huge believer in the potential of web3. This is going to happen. After graduating from undergrad my roommate in New York and I had a couple of disagreements. He thought I was too all-in on the cargo pants craze. And he thought that the internet was overblown. I was right about the internet, but in retrospect, I was a little aggressive on the cargo pants.

I believe in web3 the way I did about the internet in 1997. But what we have to remember with the shiny new toy, that consumer behavior is still consumer behavior. So just because there's a metaverse doesn't mean that a consumer wants you to show up and throw your brand in the face. They want to engage with the things that they are passionate about. We did a series of NFTs with Dunkaroos. We've gotten a lot of buzz online when we bought back Dunkaroos, which was a super popular 90s snack. We decided to do 10 NFTs and give the money to Feeding America. You're going to continue to see us show up in places where our brands are relevant, and where our brands being there can add value to the consumer, not just being there to be there. I'm excited to see where we're gonna go with metaverse.

What are your commitments to sustainability and how do they manifest in your marketing?

We've been on this journey for a long time. Essentially at our business, we take agricultural inputs out of the ground and make something tasty or convenient, and put them in some kind of package and deliver them to people. We have to be stewards of that ground. And so we've had a big focus on regenerative agriculture. We've committed to converting a million acres to regenerative agriculture and it is a topic that we spend a lot of time talking about. Essentially, a lot of farming practices wind up eroding topsoil. It is not an infinite resource. If we don't change practices, we will run out of topsoil in 60 years, that means you can't grow anything. So regenerative agriculture is growing that same agricultural ingredient, but in a way that gives back to the Earth and creates more topsoil. We're pretty focused on it. We're leaders in that area.

By 2030, we want all of our packaging to be recyclable by design. It’s very obviously an issue for the Earth. But it's also a very salient moment for consumers. The last experience they have with our package oftentimes, is when they go throw it in the trash and that is not a feeling that we want to leave consumers with. I think Good for the Earth is very foundational to who we want to be and how we want to show up in the world.

What are General Mills’ commitments to DE&I and how does that show up in your work?

If our goal is to make food that the world loves, and it is to solve problems and deliver joy, then we are going to have to understand the people that we are serving. And the consumers that we are serving are increasingly a diverse set of people. We want our company to be representative of that diverse set of consumers. We've made a couple of commitments along those lines, we were able to double representation of Black managers. We want to increase our overall minority representation. Those are ongoing efforts.

And then on the brand by brand level, we want to show up in a way that makes sense. My favorite example is our Gushers team. We're in Minneapolis, a lot of what has happened over the last two years has been very near and close to the heart of this community. So the Gushers team took the George Floyd incident, in particular, as a moment to say, how are we going to represent this community?

They partnered with the NAACP’s Youth & College division to bring attention to Black voices. There's been a lot of conversation about the fact that Black creators are often the creators of trends, whether it's a dance or a fashion trend, but oftentimes aren't getting the ultimate credit for it. So they created Black Voices Create to really shine some attention on amazing Black TikTok creators. And then they said, this has to be a long term commitment. So they just announced that there will be a Black Voices award at the NAACP Image Awards where they're going to be highlighting that next creator every year. And we're going to continue to partner with the NAACP on that.

What are you most excited about for the remainder of 2022?

We have got a lot of great stuff on tap. I think it's going to be a really good year for us. I hope it is a good year for the world. These have been some of the most tumultuous times. But I have that disruptive growth group and they're working on some ideas that I think have the opportunity to create new big businesses that could benefit the world.

I'm super excited about our bold culture cheese team. They are launching cream cheeses made with precision-fermented dairy protein. It’s genetically identical to dairy protein that a cow would create, but there's no cow involved. If you can take these proteins and create products that perform like real cheese, then I think you have an opportunity to make an amazing impact. Because you can't have a product that's environmentally friendly, if you have to ask people to compromise. I want my cream cheese to be great on my bagel. I think things like this, as these brands start to scale, are going to be really exciting to introduce to the world.