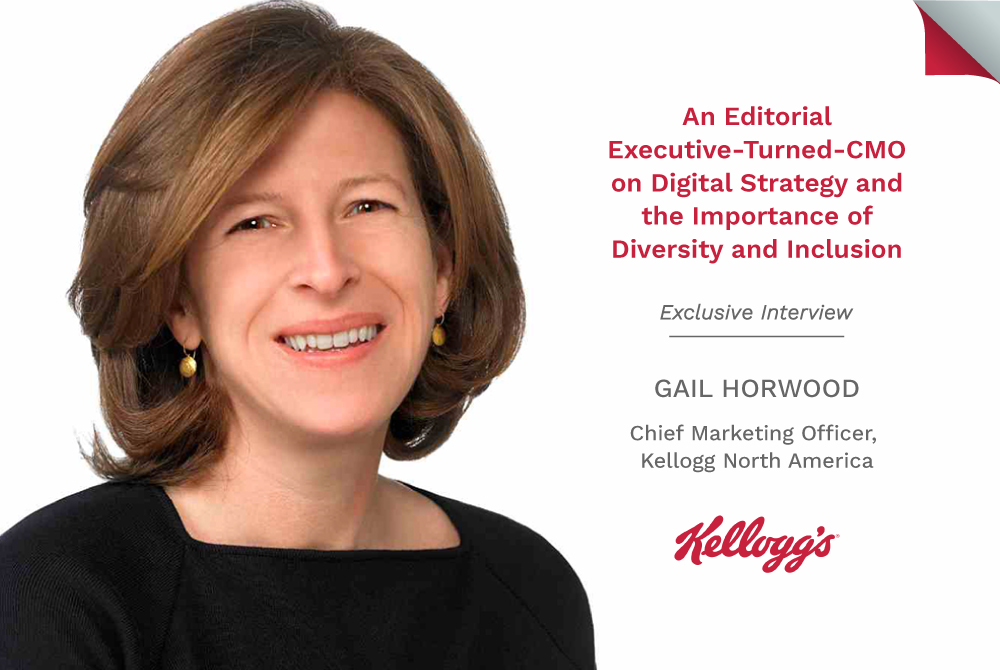 Gail Horwood, CMO at Kellogg North America, doesn’t have a typical CMO resume. She doesn’t have an MBA and she didn’t begin working her way up the ranks on the brand side after graduation.

And yet  she built critical skills in digital strategy and content creation, ecommerce and how to integrate silos -- all of which enabled her to land her current role leading North American marketing at Kellogg’s, maker of household brands like Eggo, Pop-Tarts, Rice Krispies and Frosted Flakes.

Horwood came up on the editorial of the media and publishing business, working in editor roles at Conde Nast Traveler, as editor-in-chief of food site Epicurious, as well as senior roles at Zagat, Time Inc. and Martha Stewart Living Omnimedia. She also taught a course at New York University on content strategy and omni-channel marketing.

Then, after more than 20 years in editorial roles, she joined Johnson & Johnson as VP-digital strategy and ecommerce in late 2010.

“Because I didn’t grow up in brand marketing, a CMO path was not on my vision board,” she says. “I didn’t really think about [my career] in that way. I was more focused on jobs that allowed me to really look at the integrated consumer value proposition.”

Her first brand-side role at Johnson & Johnson was as VP-digital strategy and ecommerce, where she was tasked with launching its consumer brands in ecommerce, specifically on Amazon. She then went on to become VP-worldwide digital strategy before joining Kellogg’s as SVP-integrated marketing in 2017, and later became CMO of Kellogg North America in early 2019.

Kellogg’s has been faring better than many companies amid COVID-19. North American net sales grew 6% on an organic basis, due in part to increased shipments to meet growing demand for packaged food amidst COVID-19 stay-at-home guidelines, the company said.

But Horwood’s expertise in digital content helped Kellogg’s pivot its marketing strategy as COVID-19 upended everything and kept people home. The brand was able to quickly audit all its creative and digital content that was already running or in progress to assess what was appropriate in a quarantine world.

“We started with the question of ‘what does the consumer expect from a company right now?’ And what role can we play that’s useful?” she says. “Some of our creative took place in schools, and  that’s probably not the right visual to be focused on right now, so we pivoted a lot of messaging around the nutritional value of our food, the fun and optimistic treat-making with rice krispies, and things you could do with your food that’s already in your pantry.”

That manifested itself in content that, among other things, showed activities people could do at home with their kids. “We quickly started to realize consumers were at home and are looking for activities, so we did a lot of work mining the cultural landscape. We showed them you can teach your kids math with Cheez-Its 1-inch squares. We also noticed people were using Froot Loops to make jewelry for kids, or the kids were sorting them by color as they learned colors. We celebrated that and tried to be respectful in how people wanted to hear from us, but still be present.”

Kellogg’s also aired an ad created by Leo Burnett that thanked grocery store employees and other workers that were putting themselves at risk amid the pandemic. The onset of COVID and the need to create a relevant but empathetic ad extremely quickly. “It taught us to be much more flexible and agile in terms of our planning process. At a big company, you might work on a TV ad for 6 months,” she said, but the ad thanking workers in the grocery ecosystem was put together, from  idea to execution, in seven days -- highly unusual for a national TV ad.

Brand Innovators caught up with Horwood -- on a video call, of course -- to discuss her career path, pivoting amid COVID-19, digital and content strategy, and the importance of diversity and inclusion in marketing. This interview has been edited for length and clarity.

Earlier in your career, you were in editorial and journalism roles. What made you want to make the switch to the brand side?

I would consider myself a student of consumer behavior, so I was really focused on why people do things and what they do. A lot of the work I did was trend forecasting and looking into the future a bit, and that’s actually how I got involved in the internet in 1995. I had an understanding that it was going to be something that would impact consumer behavior. And it seems like a way to make the content -- we didn't call it content then, we called it articles -- more accessible to more people.

Then I started understanding that brands could play a content role, very early on in digital. During my time teaching at NYU, I proposed a class called “Brands As Publishers,” and at first they didn’t really understand it. But I felt like journalists and creatives could really use their skill sets and apply that to more places. So I started to watch brands that were publishing content, like J&J’s Babycenter, which was a content engine for all the babycare business, but it was such an engaging site that produced quality editorial.

In 2009, I got a call from a headhunter about a digital editorial job at a bigger publication than then Martha Stewart, which is where I was at the time. I knew then I wasn’t interested in another media job. I wanted to translate my skills into brand marketing.The headhunter didn’t fully understand, but close to a year later, they called me with a role that fit what I was looking for.

Up until then, every role I had -- whether it was Conde Nast or Zagat or Martha Stewart -- was a digital transformation role and so I was accustomed to working with legacy operating models at strong brands, and that’s how I was able to translate my work to J&J, my first brand-side job.

You've been at Kellogg’s now for a few years, initially as SVP of integrated and now as CMO. What attracted you to the company?

Kellogg wanted somebody to lead their marketing organization through that integrated approach. That was like a dream come true for me and very progressive. I felt like all the ingredients were there and what I was able to do was provide guidance and organizational leadership to help the organization day-to-day bring these pieces together.

We did a lot of work around rewriting our marketing competencies -- so, how we train our marketers --  and rewiring our agency ecosystem to think more 360 degrees. We’ve rewritten the briefing process as well, so now when we brief, we do it from a total program perspective as opposed to each separate element. If you’re not briefing together, it just doesn’t work.

We spent a lot of time talking about how any one activation we do actually feels to the consumer and how we show up as one Kellogg together.

In light of the racial injustice protests, Kellogg’s made an additional donation of $1 million to the NAACP, which the company had already been donating to. Can you tell me more about the marketing team’s role in combating this racial injustice -- for example, are you looking to recruit more diverse employees, or looking for agencies that have more representation? Or have more diverse representation in ads?

I lead our diversity and inclusion for marketing and I’ve been doing that since I became the CMO. It’s something I feel very passionately about. We put together a marketing framework that’s comprehensive and includes three pillars – our people, our work in-market, our vendor and leadership. We’ve prioritized recruiting, retaining and promoting more diverse talent.

We’ve actively participated in the Consortium, which is the leading diverse recruiting forum in the country. We’re looking at the top MBA diverse students around the country, and we strive to ensure everything we do is diverse and inclusive.

I look at it holistically because it's not just one thing and it’s so systemic. But we’ve looked really closely at the work we’re putting in-market. We’re also part of the ANA's Alliance for Inclusive and Multicultural Marketing task force and just committed to the ANA/AIMM Commitment to Equality, Inclusion, and Systemic change pledge to ensure that the work we put out is reflective of the general population. We’re participating in the ANA’s cultural metrics program CIIM, where we have our creative measured for impact and effectiveness based on cultural relevance.

With agencies, I’ve led and actively ensured that as we do RFPs, we have diverse agencies but we also looked at our MSA to ensure our talent pool at the agencies is diverse and that we understand how our agencies are recruiting and retaining diverse talent.

I see agencies as an extension of our team, and we work with agencies that have the same values as we do.

How has COVID affected your marketing plans and media mix?

It required us to reevaluate everything we had in-market and what we were planning to put in-market. We do a lot around live events like the Final Four and March Madness, and obviously those things were canceled, so very quickly we started doing daily check-ins with the agencies. And within our marketing organization we put together guidelines and frameworks to help our individual marketers marketers to think about how to be relevant and empathic and present for consumers when they needed it.

We also had to do a re-planning of media. Consumer behavior accelerated in streaming and ecommerce so we increased investment there. We were already heavily invested in OTT but we were pulling money out of experiential and reinvested elsewhere. Six months of planning happened in less than a month. We just rethought everything.

This all made us realize that in order to be relevant and to be Kellogg, we had to work completely differently. Each day we’d think about what was relevant that day that we could potentially share with our audience tomorrow and the next week.

College athletics is a big area of focus for your marketing, especially experiential. How are you planning for college football in the fall, at a time when things may still be uncertain and when some teams may have games with no in-person audience?

We’ve really had to think through this and be flexible and agile. Different colleges have announced they’re going to have different schedules and will have different approaches. This means we have to create a patchwork of experience for a variety of outcomes.

We participate in tailgates and experiential marketing around these games, so we’re looking at doing that more virtually and we’re taking a flexible approach in terms of what we might be able to do and how. It’s a lot more work.

Historically, we sometimes think six to nine months ahead for experiential marketing. Now we’re thinking about the core kind of experience people want to have with our brand. And if a game is played without the fans there, how do fans participate? What's been interesting and fun as a marketer is that the leagues are open to new ideas.

I think what’s going to come of this is a new hybrid model. Previously we would have participated 100% in a tailgate, but now we’re looking at what a virtual tailgate might look like. You’re starting to see  players do recorded messages or interact with fans as a premium experience because they have special access from a brand. We’re really rethinking what it means to be a fan when  you’re not actually at the game. And in a way, the exciting thing about that is it opens it up to a broader audience.