Want to get a peek at the beer & spirits trends that will likely define the new year ahead in 2021? Swing by the Brooklyn apartment of Jay Sethi.As CMO of Diageo Beer Co. Sethi has a front seat to the legacy of beverage marketing, overseeing brand messaging for a portfolio that includes Guinness, Harp Lager, Smirnoff Ice and Smirnoff Sparkling Seltzer. 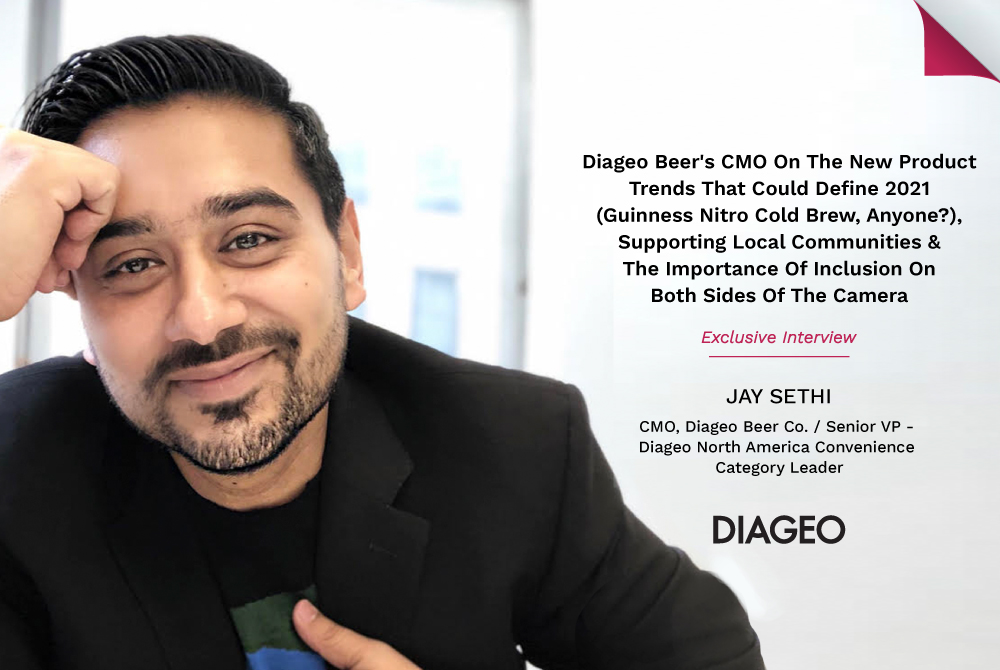 Want to get a peek at the beer & spirits trends that will likely define the new year ahead in 2021? Swing by the Brooklyn apartment of Jay Sethi.

As CMO of Diageo Beer Co., Sethi already has a front seat to the legacy of beverage marketing, overseeing brand messaging for a portfolio that includes Guinness, Harp Lager, Smirnoff Ice and Smirnoff Sparkling Seltzer. But in his newly minted dual role as Senior VP - Diageo North America Convenience Category Leader, Sethi is also charged with identifying the new flavors and product innovations that could shape consumer habits. Among those Sethi is excited about: Smirnoff Spicy Tamarind Vodka (which debuted in October), Ketel One Botanicals in a can and Guinness Nitro Cold Brew Coffee (coming early this year).

“We’ve recognized the rise of what we’re calling the convenience category,” Sethi says. “Consumers are increasingly looking for new formats to enjoy new occasions, which means they’re also buying from new channels. It’s a new multicultural America, so when you add that all up together, that includes the rapid growth of seltzer, F&B products and also ready-to-serve spirits. We’re really excited as a company about where this is going, and as the market leader, to help champion and lead some really interesting innovations in the space. It’s a task for the whole company, I’m just fortunate to help bring it all together.”

Expanding its diversity of offerings is one of several reasons that investment firm Credit Suisse recently projected that Diageo would outperform closest rival Pernod Ricard in post-pandemic revenue, forecasting an estimated 8.5% in organic revenue growth for Diageo compared to 6.1% for Pernod in full-year 2021.

Another area where Sethi hopes to pave the way in the industry is diversity & inclusion. In June, Diageo announced a $20 million community fund to support Black businesses, customers, partners and students, an extension of the company’s existing support of organizations like the NAACP Legal Defense Fund and the National Urban League (Guinness also donated $1 million locally to Baltimore’s Black community). Sethi also sits on the board of the Human Rights Campaign, and helps make LGBTQ+ inclusion a focal point for brands like Smirnoff, which has a multi-year brand ambassador relationship with Emmy-nominated transgender actress Laverne Cox.

Sethi joined Diageo in 2016 after a 10-year career at Procter & Gamble, where he worked across many of the company’s best-known brands including Olay, Ivory, Safeguard and CoverGirl. He spent his first three years with Diageo as Vice President of the company’s Smirnoff and Nurture brands portfolio before being elevated to CMO in September 2019.

Brand Innovators caught up with Sethi to learn more about how brands like Guinness pivoted to meet the new normal, the consumer insights that led to Diageo’s upcoming product launches and the importance of inclusivity on both sides of the camera. The conversation has been edited for length and clarity.

Brand Innovators: The COVID-19 pandemic turned the beer & liquor industry on its ear with the closings of bars & restaurants. How did you pivot your business from a consumer standpoint?

Jay Sethi: Obviously 2020 was a year like no other in many ways. St. Patrick's Day was really the first weekend of mass cancellations and stay at home orders, and for us St. Patrick’s Day is really the Super Bowl every year for Guinness. It’s a tremendously big event for us in the way we activate and the way consumers across America celebrate the brand.

In just the few days leading up to it, it was becoming clear there would be a disruption of some kind. But we had big plans. We were going to announce a partnership with Joe Montana and Notre Dame at the Stock Exchange, and about two days before I had to call Joe and say, “We can't do it. The reality is we have to do the right thing here, and move away from the big celebrations.”

I was really proud of what the team did in those three days we did have in advance, which was to get with our agency and pivot our message entirely in a really safe way. We created a message that was optimistic and realistic in the sense that it was talking about the times, but optimistic in the sense that we wanted to remind folks that we’ll march again and be together again, and to look out for each other. We also pivoted our marketing and media to focus almost entirely at home, and celebrate St. Patrick’s at home, and ecommerce which became almost in an instant a very significant channel. That was really an important message that we wanted to send on behalf of our brand, and really a testament to the character of Guinness.

And then we said, “What else can we do?” Guinness’ roots are in community building, and at the time we had to close our brewery down in Baltimore. We wanted to get to the heart of the brand, so we decided while we couldn’t make beer, the same ingredients could make bread. So we started making bread for the food bank in Maryland, because food needs have become pretty significant in the U.S. We’ve now provided about 19,000 loaves of bread for the Maryland Food Bank. We've never stopped and we don’t intend to, it’s now become a part of what we want to do and it speaks to the values of the brand.

What about Smirnoff, how did you pivot that business to meet the current times?

We were about to launch a major campaign for Red White and Berry, which has become almost a brand in and of itself. We launched it in vodka first and brought it over to the F&B space. And this year we were launching into seltzer, which is a category that has just exploded this year.

There’s a huge opportunity for us to create a distinctive property and carve out our own space in this category. Unfortunately for us, when COVID happened, all of the work had to be reconsidered. Because we had shot it three weeks before lockdown, and it was shot entirely for outdoor hanging out with friends and in different spaces. We had a wonderfully diverse cast with Laverne Cox, Dave Bautista, Megan Rapinoe and Diane Guerrero, really representing all of America in different occasions and different places. Laverne was outside of a diner, Dave was at a family BBQ, all of it was friends hanging out with lots of hugging and touching. So what do you do? I’m really proud of the brand and the agency because we essentially flipped it. We said, “Don’t do this, don’t do that, stay home for America.” It was really successful and fun.

In September, you added a dual role to your title of SVP-NA Convenience Leader. Tell us about what that entails, and any new initiatives you've already rolled out from that new job?

We have a pink lemonade seltzer that will be under the Smirnoff banner, that’s one of the new initiatives we’re very excited about. Another product with Smirnoff I’m really excited about is Spicy Tamarind. This is a recognition of the changing multicultural landscape, as it was first developed in Mexico. There’s about 60 million Latinx consumers in the U.S., about 36 million of which are Mexican American — including myself. It was a real privilege to be able to launch it in the U.S., and similar to Pink Lemonade we have just recently launched it as a vodka, and in the spring we’ll be launching into an F&B format as well.

The other one I’m excited about more than I can say is a coffee from Guinness. We’re really excited to launch a Guinness Nitro Cold Brew Coffee. Coffee is another emerging trend space we’re seeing in the U.S., and Guinness equals nitro. We really invented this a long time ago, and we’re excited to bring this to market in the spring.

In addition to the donations Diageo has made to support diversity, inclusion and racial justice this year, what are some other ways that D&I permeates your overall work as a marketer?

Beyond the investments, we are also increasing our spend with multicultural-owned media companies. We’re ensuring that our marketing and advertising and the level of cultural representation increases so that we reflect the society in which we live but also so that we use our resources to help America become a more diverse and inclusive space.

I’m really proud of what we’ve done with Smirnoff, specifically. Laverne Cox is an icon, and is not just a representative for the brand during Pride, she represents the brand yearlong. She’s a Black transgender woman, and to see her on this level of a platform is exciting and we’re really proud to be a part of that. You’ll see that approach reflected across so many of our brands like you already have with Crown Royal, Johnnie Walker and others.

One of the things we did preceding Black Lives Matter — which was already happening but we wanted to commit to more publicly — was more multicultural, BIPOC and LGBTQ+ representation in front of and behind the camera. Because when it comes to changing the workplace, it’s in the hiring.

And even on a personal level, I came out. I basically left Procter and joined Diageo to do that, so I know just how life-changing that is. I’m a completely different human and more grateful than I can ever say. I grew up in the Midwest in a multicultural family, so to be in a position of leadership it’s pretty incredible to be able to help the next generations feel more comfortable in who they are and just own it. We’ve been well-established partners of the HRC for quite some time, and beyond that we’ve extended that to working with organizations like Transgender Law Center through our work with Laverne.

Now that it's finally 2021, what are your predictions for the year ahead?

I think that 2020 taught us that the norms are out the window of the new era, and it’s an opportunity to embrace them and make things better. I think we’ll continue to see in this industry and society overall the emergence of these new formats, new products and new occasions. So I think a lot of innovation in what we buy but also how we buy it and where we enjoy the products.

I hope and believe we'll continue to see a commitment to being good citizens and supporting important efforts in the diversity & inclusion space. And maybe the most optimistic side of me hopes we’ll start to come together as a country a bit more. We’ve all shared this experience, and that’s one of the unifying factors of 2020 is that everyone's been impacted by this in some way. And it’s also given us a sense of resilience but humility to know that we need each other. I’m excited for 2021, we now have an organization that knows how to run fast, and pivot in a different way and innovate in a wholly different way.