Lara Richardson likes to describe her first year as chief marketing officer for Crown Media Family Networks less in rebranding terms, and more in the language of a makeup artist. 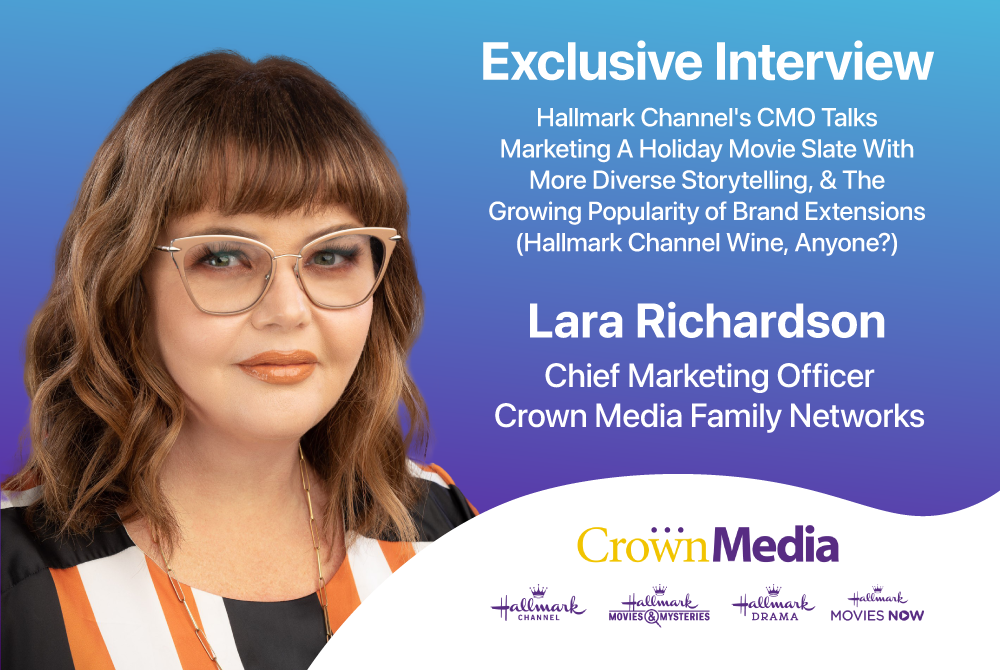 Lara Richardson likes to describe her first year as chief marketing officer for Crown Media Family Networks less in rebranding terms, and more in the language of a makeup artist.

“I wanted to come in with a fresh coat of lipstick,” says Richardson, who joined the home of Hallmark Channel and its sister network brands as its first CMO in more than a decade in December 2020. “Just freshening things up and helping it feel a little bit more modern and continue to evolve.”

But behind-the-scenes, a rebranding effort of another sort was already underway in the year leading up to Richardon’s appointment. In January 2020, Crown Media’s previous CEO Bill Abbott was ousted following his controversial decision to pull a Zola commercial featuring a same-sex couple from its air amid conservative watchdog pressure. Abbott was replaced six months later by new CEO Wonya Lucas, a media veteran who overlapped with Richardson over a decade ago during their time at Discovery Communications.

In the two years since the ad controversy and leadership transition, Hallmark Channel has accelerated its diversity efforts to include more programming representative of the LGBTQ+ community as well as other intersectional backgrounds, like an upcoming movie slate inspired by Hallmark Cards’ Mahogany line celebrating the Black experience. “The Christmas House,” Hallmark’s first holiday movie to feature a gay male couple, was recently nominated for a GLAAD Media Award, and its 2021 sequel will be one of several films on Hallmark’s holiday slate to feature LGBTQ+ storytelling.

“I was extremely impressed last year when I came in at how much progress had been made in such a short time,” Richardson says. “The channel really turned its focus and put in tremendous effort to make sure they were telling everyone's story authentically. Our brand is for everyone, and we have this universal grounding in love, joy and happiness.”

Brand Innovators caught up with Richardson from her office in Studio CIty, California, to learn more about prepping her first “brand refresh” for Hallmark Channel, how celebrations drive the network’s ratings at Christmas as well as all year long and how a recent Jimmy Fallon segment validated the popularity of Hallmark Channel’s growing wine business. The conversation has been edited for length and clarity.

Brand Innovators: You’re about to celebrate your first year with Crown Media Family Networks. What are some key highlights and major initiatives you’ve helped introduce since joining the company?

Lara Richardson: I joined a brand with this incredibly loyal fanbase, so I felt like my job was to help continue to evolve that brand and bring out the best qualities that I possibly can. Over the last year, I really took a look at a couple of things. One was the future of the team. There's a lot of people who have been here for a long time who have tremendous brand knowledge, so we’ve been elevating them to the right position and getting a united team.

And another one was lifting some of the creative restrictions that frankly were self-imposed, and taking a look at some things where we could stop, start and continue from a creative standpoint. I wanted to help the brand come into its own, embrace the pop culture status it already has and bring that forward. Some of that has been happening over Christmas, some of it is happening as we work on a brand refresh that's gonna hit really soon. It’s nothing earth-shattering, but coming in with a “fresh coat of lipstick,” as I like to say. It’s just embracing the “love” aspect of our brand in a bigger way. We have been trying to do that both within this brand refresh that we’re doing and just in general in how we talk about the brand.

How much of your viewing comes from linear TV vs. streaming, and where do you see the biggest growth opportunities in the OTT space?

We have four distinct platforms, and linear is still the driver for us. But we have absolutely been seeing a lot of traction from Hallmark Movies Now, our streaming platform. In fact we have two original Christmas movies there this year, which is new to us. And as we start out with this fresh coat of lipstick and bring in new viewers, we know streaming is a platform they prefer. We’re all about continuing to serve that loyal fanbase, so we will be driving to all of those platforms.

Hallmark Channel’s Christmas programming has become such a juggernaut that it’s known to draw an audience even outside of the traditional Thanksgiving to New Year’s timeline. What non-Christmas tentpoles have performed well for Hallmark this year, and why?

Steeped in the brand is celebrations of all kinds — holidays and all of that. And our programming definitely reflects all those seasonal events throughout the year. February, for example, is now going to be called “Love-uary.” We are the queens of rom-coms and February is our month, so we really want to embrace that time of year.

We’ve had some good success with summer nights, our summer movie programming, and rolled into some fall harvest. Some of these autumn movies leading up to our Christmas, which starts at the end of October.

And then there’s Christmas in July. We are known for sure for Christmas. I was shocked and pleasantly surprised at how much people will watch Christmas movies all year long, including when it's hot outside. So Christmas in July was definitely a highlight for us.

What do you have planned for this year’s Countdown to Christmas programming, and how are you leaning into experiential and in-person marketing this year in ways you might not have been able to last year?

Getting out into the world, as you can imagine, has been challenging with COVID. But we really want to meet our fans where they are, so we tried a couple really fun things this year. Because we start our Christmas programming so early in October, we set up pumpkin patches in five local markets with holiday cheer, where we surprised and delighted the customer by buying their pumpkin for them. And we'll do the same in Christmas tree farms, we’re out in all different kinds of local markets doing that.

We also had an incredible launch of some holiday-decorated Wyndham Hotel rooms. These are three specialized suites in Colorado, New York and Nashville, that we decked out like your Hallmark holiday Christmas dream. New York was sort of a traditional holiday theme, and then we did Christmas music in Nashville, and a snowy one in Colorado. Wyndham put these up for consumers to stay there, and it sold out in all three properties in seven hours. People were just begging for more, so we’re really excited to see how that turns out.

We’re also taking over a car wash in Chicago, and turning it into a Christmas wonderland. Since we can’t be out and about, when people drive through it’ll be a winter wonderland in their car wash. And there’ll be ugly sweater wrapped cars in different places around the country, driving around. We’re deciding to embrace that part of our brand.

How does Hallmark Channel’s love of Christmas translate to your company culture?

I felt like our building needed holiday cheer, beyond the Christmas tree that looked like it belonged in a bank. We wrapped our building like a ginormous tree, complete with inflatable bows, and presents. And the day before we launched our movie season,  Candace Cameron Buré actually flipped the switch and turned the lights on the building. It’s been so fun to see people say, “I didn’t even know Hallmark was in Studio City.” It really brought our building and our company culture to life.

Last year, Hallmark Channel introduced its first brand extensions with a line of holiday-themed wines. How have those performed, and will we see you branch out into other product categories this year?

We have some wine drinkers among our fans and I love it. The life cycle of the wine is a d-to-c business first and then expands into a wine club and into retail. Usually that takes quite a while, however with our wines due to pre-sales, the media's coverage and just exposure for our loyal fanbase, we went from a presale window all the way to d-to-c to a retail business in less than three months. We have a wine club already, it's just been so fun for my job I didn't think I'd get to design a wine bottle and labels and stuff. We're in Kroger and Safeway and Cost Plus World Market. We even had Jimmy Fallon do a hilarious segment about our wine without our involvement. That to me tells me we’re doing something right if one, it’s selling out and there's a huge demand for it, and two we’ve got Jimmy Fallon talking about it.

We also have a tea partnership with Republic of Tea. And Oprah just featured us on her list of 10 best tea gifts for the holidays. It’s not her favorite things list, but her favorite tea thing list, so I’ll take that. And like I said, we have a whole line of pillows and towels and stuff and socks and shirts in our Gold Crown Stores that are extremely good sellers as well as online.

The past two years have seen tremendous change. What new or emerging consumer behaviors from the pandemic era do you think are here to stay, and why?

It’s definitely been a reminder that family is so important. I think people really learned in this pandemic the value of other people and their connection to them. And so, I think people are seeking a lighter approach in certain entertainment aspects. They do want to watch the heavier stuff, but we saw people flood to us for that escape and for that positivity. And I hope that that feeling of seeking out positivity, and time with other people and putting love into the world.

I certainly see that with Gen Z, I feel like they are really starting to see my Gen X generation as workaholics, and I think that’s probably not going to stick — in a good way. It’s really about the human connection and connecting with each other and being in a place of joy and happiness rather than negativity. That is what we do here at Hallmark, where we’re about putting love and positivity into the world.