In the weeks leading up to Super Bowl LV on February 7, Cadillac’s chief marketing officer Melissa Grady hadn’t nailed down a strategy for her brand on TikTok, a platform known for helping branded content go viral with Gen Z and millennial consumers with the right approach. But based on overnight evidence from family members who saw Cadillac’s “Edward Scissorhands”-themed spot starring Timothee Chalamet pop up on the app following its premiere, a TikTok strategy suddenly started creating itself. 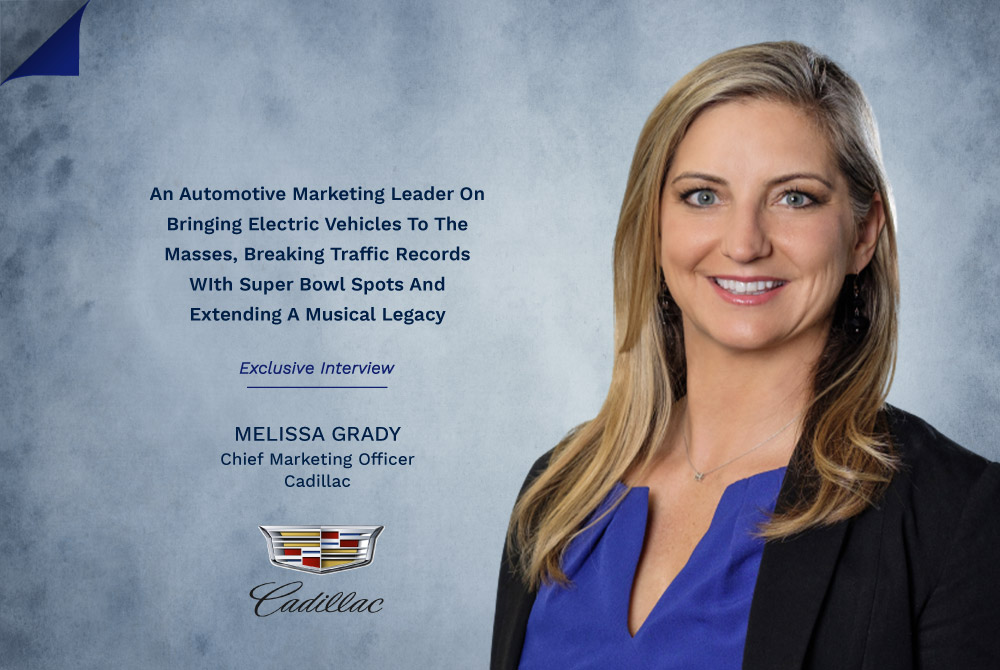 In the weeks leading up to Super Bowl LV on February 7, Cadillac’s chief marketing officer Melissa Grady hadn’t nailed down a strategy for her brand on TikTok, a platform known for helping branded content go viral with Gen Z and millennial consumers with the right approach. But based on overnight evidence from family members who saw Cadillac’s “Edward Scissorhands”-themed spot starring Timothee Chalamet pop up on the app following its premiere, a TikTok strategy suddenly started creating itself.

“Someone said we were going to break the internet with our Timothee Chalamet commercial, and [for us] that was breaking TikTok,” Grady says. “It wasn’t even really in our purview at that point, but my niece and a lot of my colleagues’ nieces and daughters were texting all of us screenshots of TikTok and how Cadillac was all over it. iIt was really interesting to us, and we’ve been looking at how to engage moving forward.”

The Super Bowl campaign was equally successful for Cadillac on multiple other levels. It helped break records for the highest traffic day at Cadillac.com, and generated a healthy amount of press buzz for the brand. It also helped build demand for the hands-free driver settings that will be a key factor in the launch of Cadillac’s first all-electric vehicle, the Lyriq, which goes on-sale this fall and starts deliveries in 2022.

The Lyriq launch, which continued with a TV ad that aired during the Oscars, is part of General Motors’ wider commitment to source 100% of its energy for U.S. vehicles through renewable sources by 2030 (and globally by 2035). It should also help further accelerate Cadillac’s sales momentum coming out of COVID-19 complications and setbacks. According to General Motors’ first-quarter 2021 earnings, Cadillac saw a 43% year-over-year increase in vehicle deliveries and 1.1% increase in market share during the time period, including a 127% increase in retail deliveries of the all-new Escalade and retail sales lifts as high as 60% for luxury vehicles like CT5.

Brand Innovators caught up with Grady from her home office in Detroit to learn more about her plans for the Lyriq, her reverse-funnel approach to media and Cadillac’s important role in GM’s ongoing commitments to diverse representation and media-buying. The conversation has been edited for length and clarity.

Brand Innovators: What are some ways the COVID-19 initially impacted your business last year, and what are some pivots or innovations you put in place to adapt to the new market conditions?

Melissa Grady: The pandemic was really interesting, but the thing that it did for us and a lot of other industries was it really accelerated innovation. In automotive, as marketers and manufacturers we’ve been wanting to push a lot of innovations for awhile, but customers like to shop for cars in the traditional way of doing a little research online, go to the dealership, kick the tires and test drive. Also a lot of the innovations we were trying to drive didn’t have a lot of uptake pre-pandemic.

For example, we started Cadillac Live, which is a one-way video chat with a product specialist who has all the cars in a showroom, sort of a personalized auto show. We had just launched that a few months before the pandemic and usage of that went through the roof. Ecommerce really kicked up — if 5% of the purchases used to be done online, for a while it was 95% online. We’re back to normalizing, but we see bigger shifts of people using digital.

The other thing that’s changed was how we produce things. We do a lot more remotely, and we’ve figured out how to do a lot more with evergreen content and building a library. Zooming vs. flying into shoots is really sticking. We’ve seen a big shift in consumer behavior over the past year, just in how they’re consuming content. What’s been interesting is watching TV ratings go down and at a time when people are really at home, that’s also created a really fun opportunity for us to understand what people are doing and how to insert ourselves into those conversations.

One of my favorites with that was with the Escalade launch, [Grammy-nominated singer/songwriter]  James Blake had a new song coming out and we worked with him to debut that. The Escalade has 36 speakers in their AKG, which is really industry leading, so we debuted his song in a socially distanced private concert that was then broadcast out. It was just phenomenal and really showed how that sound system works.

Another thing we did with Escalade was we partnered with 60 Second Docs and Becky Hammon, the first female NBA coach, and that was something that was picked up across the board. We’re looking at more fun ways to connect with people now that people are consuming content in different ways.

Given those significant shifts in content consumption this past year, how are you adjusting your media mix?

When I joined Cadillac [in 2018], we flipped the funnel and we started with an audience-first approach. We modeled out the entire U.S. and we figured out who the high propensity-to-Cadillac consumers are. We looked across digital, addressable TV — how can we best reach this audience? Then we fill that in with linear TV, instead of starting with linear and hoping to reach everyone. We then fill in with linear TV and do different things — we sponsor college football, we [were] at the Oscars on Sunday [April 25], we were at the Super Bowl. We try to use TV for those more tentpole and brand moments to have something that’s more of a storytelling experience there. We have in-market media and shift to more of these branded content partnership ideas, so it’s been a shift that we’ve been undergoing for the past couple years. I’m constantly digging in and trying to understand what’s next.

GM has made lots of pledges at a corporate level to increase its diversity, equity & inclusion efforts in the coming years. What progress can you share so far from Cadillac's perspective, and what are some actions you've been able to take as CMO to further accelerate them?

There are a few sides to that. At Cadillac we stood behind [CEO] Mary [Barra] last year in June when she went out with her letter about Black lives and social justice and equity for all, and Cadillac made a post saying we wouldn’t be where we are without the Black community and we stand with you. That’s been a part of Cadillac’s history and will be moving forward. Right now we have our “Audacity of Blackness” campaign, which is really powerful and really celebratory. We also have a lot of ongoing partners, we’ve been with the ABFF [American Black Film Festival] for years, we sponsor the Native Son awards. There’s a lot of different charity work that we do, standing tall for Detroit small businesses. Also we’ve been working with Inventing Forever, which is a portrait series on Black inventors and innovators.

We’ve had ongoing activations with the LGBTQ+ community too. GM was one of the first companies to fly the Philly flag at our HQ, and we also updated the Cadillac crest to reflect all of the inclusive views of Pride month on social. It’s a month when we always have a lot of action going on.

GM has also made lots of commitments to rapidly expand its sustainability efforts in the coming years. How will that manifest itself in your marketing messages?

GM’s sustainability is really at the forefront of a lot of what we’re doing now, as we look at that and our commitment to using renewable energy, as we look at how we’re looking at sustainable materials moving forward. And at Cadillac, we’re going to be the first all EV brand within GM. GM’s mission is zero zero – zero emissions, zero crashes and zero congestion. As we look at manifesting that for generations to come, it’s going to paired with our focus on building awesome cars.

As the vaccine rollout continues to gain momentum, how will you approach event sponsorships for in-person gatherings? Will digital/virtual technology be a permanent part of your activations going forward?

Right now we’re not really considering anything in-person until later this year, and even at that point we’re cautiously just watching what’s happening right now. What has been really interesting is how we've shifted things and not only extending our reach by doing this digitally but creating something engaging. It is becoming a blueprint for how we move forward.

We’re trying to figure out what’s the best format of that when we all have Zoom fatigue. It was really fun to do a digital event at the beginning of the pandemic — we all wanted to stream concerts. But as we’re moving through, we’re trying to figure out how to stay relevant and interesting to people but still have this blended model. Moving forward, we’re definitely looking at what on-the-ground activations will look like, and what’s that extendable digital reach for that.

Given your success with James Blake and Escalade last fall, will music play a part in those blended activations?

Yes. We did something with The Roots and Baby Rose at Irving Plaza in New York, we've done a few things with music. We did something recently with RZA and the Escalade. Cadillac is the most mentioned manufacturer in song lyrics, and our first electric vehicle is called the Lyriq because the Cadillac is so musical. Music is something that’s very important to us and we’ll continue to figure out how to do interesting things in the music space.

Do you have a favorite song that mentions Cadillac in the lyrics?

The first one that comes to mind right now is Ludacris [“Southern Hospitality”], which always makes me smile. “Cadillac grills / Cadillac mills…”

What new or upcoming initiatives are you excited about this year?

I cannot wait to bring the Lyriq to market. It’s going to be on-sale in September, but not in-market til next year. For our pre-order program, we are really focused on how we continue to tell the Lyriq and electric story. There’s so many amazing things about this vehicle — the lighting is magnificent, it has over 300 miles of range, it’s got a beautiful LED screen. It’s just a gorgeous, amazing vehicle and I’m honored to be bringing it to market.