Earlier this year, Andrea Zaretsky, Chief Marketing Officer at E*TRADE, oversaw a sizable campaign slated to launch during March Madness. But as COVID-19 reached across the country, it became clear the NCAA would not be able to proceed with the college basketball tournament as planned. 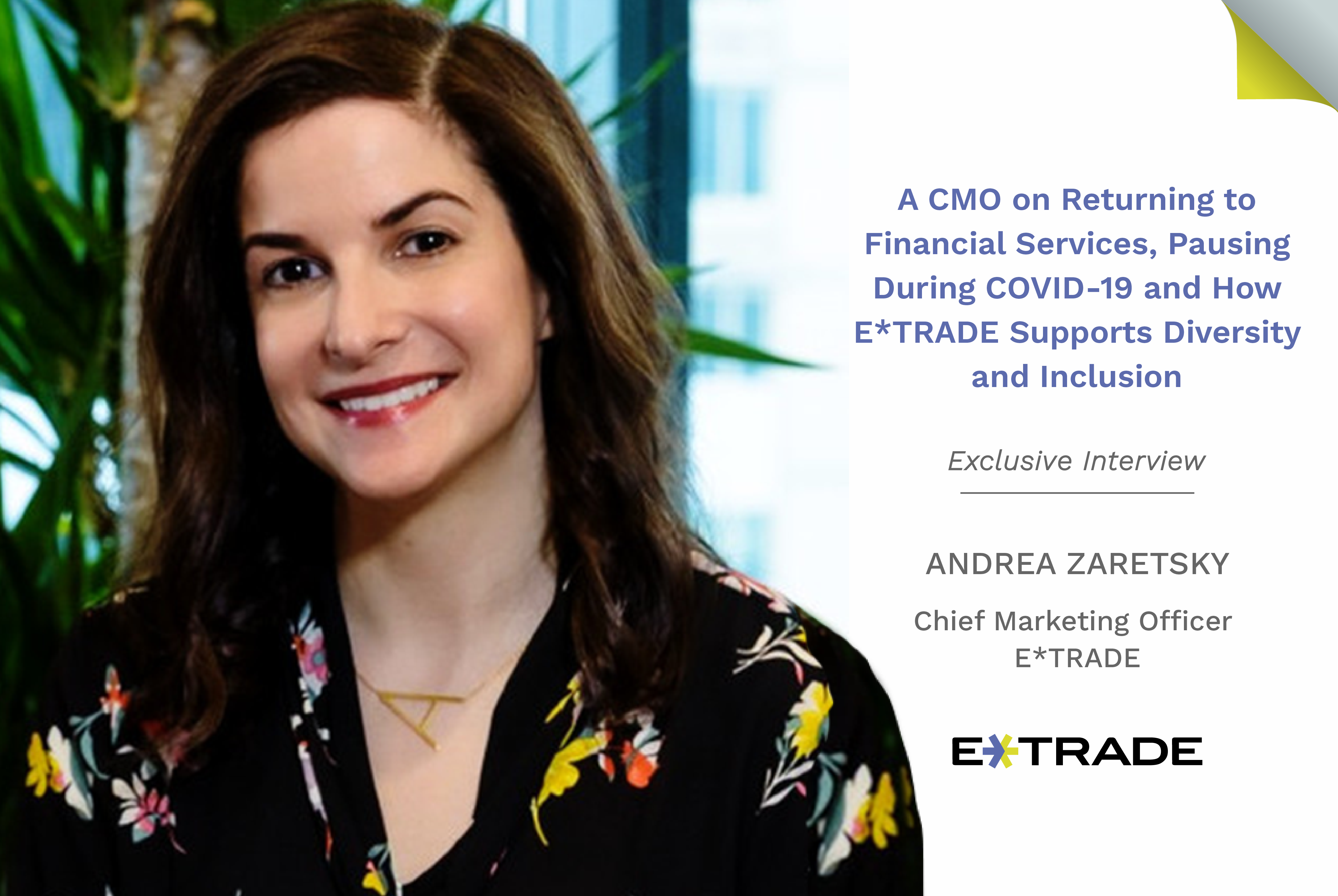 But as COVID-19 reached across the country, it became clear the NCAA would not be able to proceed with the college basketball tournament as planned. Once the organization made the call to cancel it, advertisers with plans to run commercials during the tournament suddenly found themselves having to evaluate their options for when and where their ads could run.

“When Covid hit we took a step back to evaluate our messaging and to see if it would still be relevant, impactful and helpful to our customers,” says Zaretsky, adding that since the work couldn’t appear during March Madness, E*TRADE put the work through additional rounds of consumer testing to ensure the messaging was still landing right. “We learned that the [consumers we surveyed] found the messages to still be topical and thought it was refreshing  that our brand was continuing to share the humorous and irreverent tone they’ve come to expect and enjoy during a difficult time. They said it provided a little levity.”

Feeling comfortable that the campaign, called “Buying The Dips,” was still tonally appropriate, the brand premiered the new spots during the virtual NFL draft in late April. “It turned out to be a great place to launch, given its record-breaking ratings and everyone’s excitement to view the closest thing to live sports at that time,” says Zaretsky, who joined E*TRADE in September.

The campaign aims to educate people on the importance of taking charge of managing your finances, particularly during a downturn, Zaretsky says, by taking the brand’s usual humorous and lighthearted tone. The first ad features an auction where people are bidding on and buying actual chip dips, with text at the end that says “If this is your definition of buying the dips, maybe trading isn’t for you. Another ad from the campaign, released after “Buying The Dips,” seeks to educate viewers on bear markets by featuring literal bears in a literal market.

She added that as part of the company’s response to COVID-19 “we also expanded the messaging to share how we’re working to assist consumers during the crisis. In addition, we increased the market commentary we were providing, webinars, and created a landing page for resources and assistance. And we created a new series of videos about financial tips in the time it takes to wash your hands, which is 20 seconds.”

E*TRADE, of course, has long been known for its Super Bowl ads. This year’s spot was one of the first major pieces of work to debut since Zaretsky arrived in September. She came to the brand after serving as SVP of marketing at Sephora for a year and a half. She went to Sephora from her role as SVP at Toys R Us, and prior to that, she spent 14 years at American Express, where she worked her way up to head of U.S. marketing.

Brand Innovators caught up with Zaretsky from her home in New York to chat about the company’s commitment to diversity and inclusion, its marketing approach during COVID-19 and how E*TRADE is doing in a space filled with startups and newcomers. This interview has been edited for length and clarity.

In light of the resurgence in popularity of the Black Lives Matter movement and racial justice, is E*TRADE making any donations to causes or looking to add more people of color to its organization?

At the corporate level, we’ve donated $1 million to the Equal Justice Initiative and the NAACP Legal Defense Fund. And we launched a Belonging in FinTech E*TRADE Scholarship which supports diverse, emerging talent focused in the areas of financial services and technology.

We also recently launched Days of Action, where employees are encouraged to take a day off to learn more about social issues and take civic action in their local communities.

Diversity and inclusion have also long been a part of our DNA. Our Diversity and Inclusion Advisory Committee and employees have been hosting a series of solidarity forums to help foster dialogue across the company on race, diversity, and inclusion.

Any particular donations the company has made for COVID you'd like to talk about?

We’re doing everything we can to lend a hand to the communities we serve. This includes providing thousands of masks to hospitals around the country, Supporting some of the hardest-hit regions with sizable contributions to local relief funds and restaurant gift cards to frontline responder, and matching employee contributions dollar for dollar to coronavirus-related service organizations such as Meals on Wheels and the CDP COVID-19 Response Fund.

Have there been any learning curves in this role that were unexpected, or did you feel the environment is similar enough to other companies you'd worked at?

Since joining E*TRADE, it has truly been an unprecedented, dynamic and exciting time in our industry and at the company. And we all like to laugh at the overuse of the word “unprecedented” but it is very true.

In Q4, we had a major moment in the space when we eliminated commission fees on trading along with our peers in the brokerage space. In Q1, Morgan Stanley announced their intention to purchase E*TRADE, which is set to close at the end of this year. And this spring, we’ve all been working through the havoc brought by COVID-19, and more recently, focusing on incredibly important social justice issues.

For me personally, from a content perspective, while I’m back in Financial Services and my roots, I’m excited to be learning about a new area of the industry.

How has your media mix changed in light of COVID? What are your priority channels?

For our campaign that was scheduled during March Madness, we’d also planned a large out-of-home buy, so we had to change the out-of-home plan once March Madness was canceled. My philosophy is family first-planning and communication. With the canceling of major sports in general, we had to reevaluate our plans and we had to learn to be flexible. With some sports coming back there will be some potential new opportunities, but we’ll just have to wait and see what happens with others.

Late-night TV has been interesting because they've been able to keep things going despite lockdown remaining, so we’ve been advertising on “The Late Show with Stephen Colbert,”

“The Late Show with James Corden,” “The Tonight Show with Jimmy Fallon”

and “Late Night with Seth Meyers.”

Have you noticed an uptick in your business as more people try their hands at investing due to the popularity of fintech and apps like Robinhood? Or do you have more competition nowadays?

We’ve seen record account and asset growth in recent months and account transfers suggest we’re grabbing share from the fintechs. Not only have we been welcoming new customers, but also we’ve seen existing customers bring additional assets here. We’ve also been much more aggressive on the marketing and sales side and positioning our offering in the marketplace very effectively.

Regarding the campaign you launched in April, how has that been performing and do you have any business results you can share? More new customers, etc.?

We recently released monthly metrics and by all accounts we’re breaking records in terms of new assets and accounts. This is the first chapter of an ongoing campaign, which will evolve and roll-out through the end of the year as we continue to identify where to best reach and engage current and prospective customers.

The focus is all about expanding perceptions of E*TRADE beyond our trading platform and shining a light on our diversified offering which can help our clients achieve financial wellness.

How has remote work been working for you? Do you foresee a future with more of your team working from home some days of the week?

Like any company we are working through the implications of having 99% of our workforce meeting customer needs while remote, and success on this front has been astounding. We’ve learned we can work from home and be incredibly productive. Now that we've seen we can do this we see, we have options for people. Some people will want to be in the office, and some will want to stay home sometimes. The best scenario for many companies would be more customization for work, where people can choose what works for them. We want to deliver the right workplace solutions for our people.

I recently spoke to our employee network, Women @ E*TRADE, about this topic, and provided some tips that have been working for me personally and on our team. We believe in family-first planning and communication, especially during the school year. People are now having to figure out both their work schedules and their family schedules, so it’s important to communicate. I also advise scheduled breaks, trying to have some video calls to have face time, more frequent meetings and one-to-one meetings to check in and connect with colleagues and direct reports.