Kierstin De West’s June 2021 appointment as chief marketing officer at plant-based frozen-food company Alpha Foods marked a dual milestone for the six-year-old brand. Not only was De West the inaugural executive to hold a CMO title at Alpha, she also had the dual task of bringing its first major brand campaign to market. 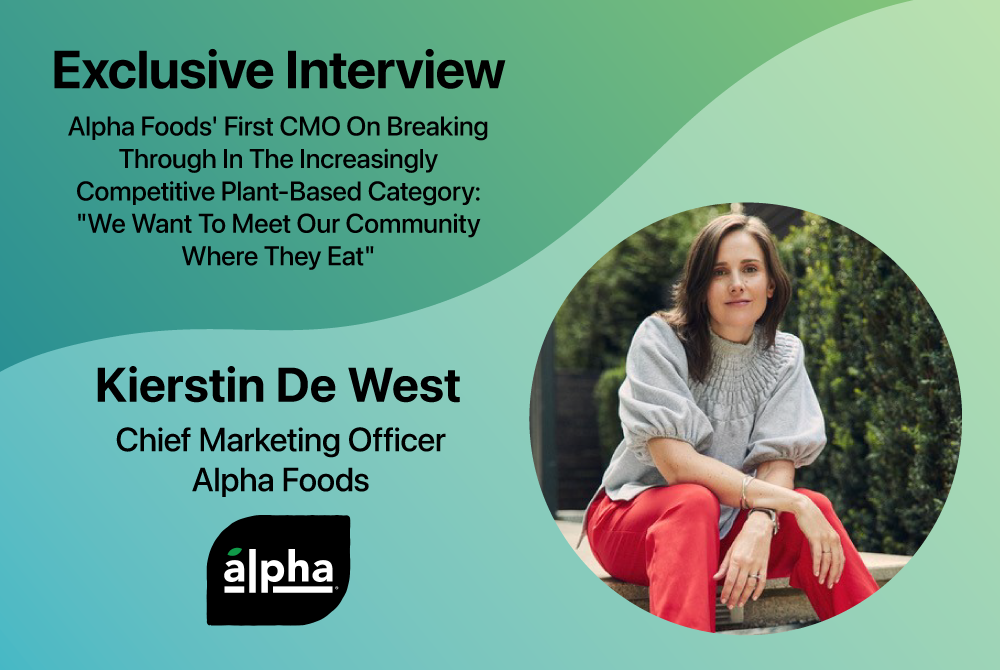 Kierstin De West’s June 2021 appointment as chief marketing officer at plant-based frozen-food company Alpha Foods marked a dual milestone for the six-year-old brand. Not only was De West the inaugural executive to hold a CMO title at Alpha, she also had the dual task of bringing its first major brand campaign to market.

Several months later, De West introduced “Class Action Lawsuit,” a tongue-in-cheek spoof of 1-800 ads from personal injury lawyers featuring blurred-out testimonials bearing the resemblance of famous mascots from Kentucky Fried Chicken, McDonald’s and Wendy’s who accidentally “went vegan” after trying Alpha’s plant-based products. The campaign, created in partnership with agency Mischief @ No Fixed Address, debuted in September to a warm response from consumers and press, and has been viewed more than 1.5 million times on YouTube alone.

“There’s a perception in the plant-based category that you have to be vegan to enjoy plant-based foods,” De West says, “So humor is such a powerful way to reduce barriers to entry. A big pillar for us is accessibility in terms of distribution and product, as well as accessibility in our personality. Everybody is welcome, no judgment, let’s not take ourselves too seriously and have fun with it. We targeted the flexitarian consumer as well as the non-meat eater, and what better way than to hero some iconic meat eaters.”

De West quickly followed up the campaign with a successful food-truck activation at college campuses to encourage trial of Alpha Foods’ three most popular products - meatless “chik’n,” burritos and breakfast sandwiches. Up next? Expanding Alpha’s distribution beyond its core base in the U.S., where its products are available nationally at Walmart, Whole Foods and Sprouts as well as regional retailers like Kroger, Albertson’s, Safeway and Stop N Shop.

“We’re mainly in the U.S., and still in the early innings of our potential in the market, but there’s a lot of runway rolling into Canada with full national rollout next quarter,” she says. “We have some of those relationships present in some APAC markets, Singapore, Hong Kong and mainland China and a couple more international markets dropping in Q2 of next year.”

Brand Innovators caught up with De West from her home office in Vancouver to learn more about her first six months at the fast-growing brand, initial success metrics from the “Class Action Lawsuit” campaign and why the competitiveness of the plant-based category “feels like the dot-com boom.” The conversation has been edited for length and clarity.

Brand Innovators: You joined Alpha Foods earlier this year as CMO. What attracted you to the opportunity, and what have some of your first initial priorities on the job been since you started?

Kierstin De West: I was really clear on what I wanted in a role which was really reflective of something I’ve been focused on for the last 20 years, to build a better brand and better world. That’s a lot of buzz words — purpose, sustainability, impact — but that’s been my north star. So when I started looking for my next move, it was for a high-growth, high purpose, innovation-driven brand. And when I say high growth, I mean grow the brand, grow the business and grow the team. I like building things, and I have a bit of a unique background in that I cut my teeth in global brands, and I’ve also been an entrepreneur running an agency. Bringing an entrepreneurial attitude to larger brands and bringing a more global brand expertise to growing brands like Alpha, that was the filter I applied to every opportunity. And the cultural values of Alpha and the pillars around purpose really resonated with me.

Were you familiar with Alpha or its products prior to discussing the role?

I was not familiar, the reason being I’m based in Vancouver and Alpha’s not distributed in Canada yet, though we’re about to roll out here. But I was familiar with other plant-based brands as I learned about it and got to know our CEO who really wanted to have someone in the role who understood how to build a lifestyle and not just a frozen food brand. That was another thing that made me really excited as I learned more about them – they were ambitious without sacrificing kindness or integrity. Stepping into the role, I saw an opportunity to build a lifestyle brand, so I had to do a lot of listening and learning to understand our culture and our consumers. Having really in-depth consumer research was super important, as well as landing the global brand architecture, which we’re about to wrap up. We started working with the Harris Poll to look at consumers’ relationship with plant-based foods.

What products in the Alpha Foods portfolio are most popular this year, and why?

Chik’n, breakfast and burritos all day long. Those are our franchises. We find when our community comes in on those products then they go into some of the other SKUs. We’re one of the few if only plant-based food brands that serves all meal moods and all day parts. Whether people are looking to eat plant-based breakfast, lunch and dinner, we have snacks and entrees  for all three of those meal times. It’s not just looking for one moment, so we find that chik’n, breakfast and burritos are really solving for that.

What success metrics or initial results have you seen from “Class Action Lawsuit” since it launched?

I can share that we are seeing some double digit sales lifts in markets where we amplified and more importantly we are bringing more people into the Alpha community. We have some consumers who I would call super fans, and I see brand behaviors in our communities that are similar to a Lululemon, a Peloton, or a Glossier. It’s brought way more people into our community. We got comments from about 15,000 people from that campaign, we doubled our YouTube subscribers and we saw sales lifts so we feel super happy. It’s really the first time we’ve started marketing the brand, so it’s still early days for us.

Although you poke fun at big fast-food chains like McDonald’s, Kentucky Fried Chicken and Wendy’s, several of those brands have recently introduced plant-based items to their own menus through partnerships with Alpha competitors like Impossible Foods. Is doing something similar with a big fast-food chain part of your long-term strategy or distribution goals?

When you look at the competition, where they're not focusing as much is on the Tier 2 restaurants. We’re seeing an opportunity for us there in terms of the brand personality, the offering and our community. It’s not like we would say not to that, but we’re seeing a lot more opportunities with QSR franchises that are smaller but still significant in size.

You quickly followed that campaign up with a food truck activation at college campuses nationwide to encourage sampling of meatless meals like burritos, breakfast sandwiches and chik’n nuggets. Beyond college campuses, what are some other channels you rely on from an evergreen perspective to encourage engagement with Alpha Foods products?

It’s very much from a mindset perspective as we go more for the flexitarian, so it ranges in ages. We find someone like a balance seeker and future flexitrain is our audience. Some are eating plant-based for a better world, others are doing it for health reasons, so that broader group is what we're targeting in that 18 to 40 range.

We find these skew and connect with humor and lifestyle and health and wellness overall, so we’re bringing them into the Alpha community and meeting them where they’re at. That doesn't mean we’re not getting the vegan or don't support the non-meat eater, but what's really important to Alpha is meeting people where they’re at on their plant-based journey vs. finger wagging them about what they to be or what they like to eat. Nobody likes judgment, and we saw from the Harris Poll research a lot of pressure from food stigma and food judgment. We’re all about the balance – you might be steak frites on a Monday and plant-based chicken on a Wednesday.

You spent many years as a brand consultant prior to going in-house at lululemon and now Alpha Foods. How did that experience inform your strategic approach as a marketer – what are some of your guiding principles that you’ve carried from role to role?

What’s critical for me as a marketer is to understand the culture for which your business is operating and not live in the silo of the category. It’s important to have an understanding of how your people and audience are spending their time, money and energy. Whether it's Lululemon or Alpha or Nike or MillerCoors, no one consumer is thinking 24/7 about that one category. What I know from my previous lives and doing a lot of work in the purpose-driven sector with large brands is that people don't expect Mother Teresa. But they do want you to tell their story.

Given all the tremendous change and unpredictability of the past two years, what’s your prediction for 2022 as it relates to your business?

What's really come from the pandemic is it’s accelerated the idea of no compromise. “These are my values and I want to express these values through my lifestyle choices, my purchase decisions and the places that I work, and I’m looking for brands to fulfill that.” I think what we saw is a huge acceleration of that, the culture in which our businesses are all operating now vs. something we think could happen in the future.

For the plant-based food category, I see huge opportunity. There’s been a hype cycle this year – 40 new brands in the sector that retailers are now looking at. It reminds me a lot of the dot-com boom, where you saw a lot of these brands come into the category, then there’s sort of a shake out. And we feel really good when we look at how our community is feeling about Alpha. We’re not an ingredient brand, we’re not a moment in one part of your day brand. So that we get really excited about, especially when you look at our Harris Poll stats like more than half of Americans agreeing that the future of food is plant-based, or 83% of plant-based food eaters saying they plan to maintain or increase their consumption in the next year. That feeling of a rising tide lifts all boats will bring a lot of collaboration and community building within the plant-based category, which bodes well for everyone’s future.