Busch Beer is running its Snow Day winter beer campaign that will discount its drinks through a rebate based on the snowfall in the number of inches of snowfall in select cities. 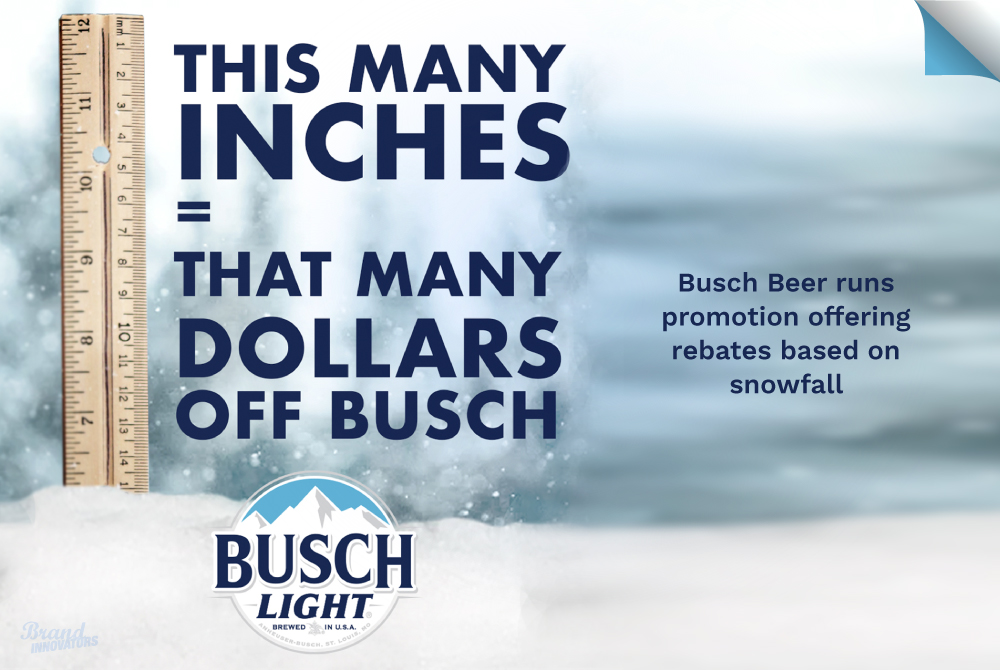 Busch Beer is running its Snow Day winter beer campaign that will discount its drinks through a rebate based on the snowfall in the number of inches of snowfall in select cities.

A consumer can receive a rebate with $1 off of select Busch products for every inch of snow that falls in their area. Busch will keep a real-time clock tracking snowfall across the participating geographies on their website at Busch.com/snowday.

"We have always been a brand that encourages its fans to celebrate the things in life that really matter, and Busch Snow Day gives all beer fans a reprieve from the cold winter months," said Daniel Blake, Vice President of Value Brands at Anheuser-Busch. "As well, Busch is a brand that likes to engage with its fans in unique and unconventional ways, and since we all know snowstorms can be a pain, we came up with a fun way to ease a bit of that burden. Once snow day chores (digging out driveway, clearing cars, etc.) are completed, Busch wants its fans to be able to kick back and enjoy a beer."

The latest campaign comes after a similar effort last year proved highly responsive to the brand. Last winter, Busch Beer ran a similar effort in seven of the snowiest U.S. states. After the campaign was met with high engagement, the brand is extending the offer this season to 31 states.

"Last year we launched the Snow Day campaign in seven snowy states across the U.S. and the fan reaction was huge," said Blake. "Not only did we hear from fans in those states but folks in other states chimed in wishing they could get involved. So in response, we knew we had to bring Snow Day back in 2021 but make it even bigger. Busch Snow Day is now available for all of the states that received more than two inches of snow in 2020 expanding the offer from 7 to 31 states to reach even more of our fans."

The campaign is running during Dry January, a time when consumers commit to spending the first month of the year sober to restart healthy lifestyles after the holidays. This year, some 6.5 million people have signed on to participate. By creating a fun and playful campaign, Busch Beer has an opportunity to appeal to consumers who are still willing to imbibe during the cold months.

By creating a story around weather, Busch has a continued narrative for social media throughout the cold months. Additionally, it gives consumers something to get excited about even if they have to endure a cold winter. This year, the Farmer’s Almanac is predicting more snow than last year, which translates into more discounts on beer for these fans.

"As a brand, we like to help our fans celebrate the small things in life, whether it’s providing a discount on their favorite beer or giving a stockpile of Busch to couples who had to change their wedding plans due to the pandemic," said Blake. "We are constantly looking for ways to help our community, so we’re happy to offer our drinkers a reason to not dread the cold and snowy months this year and maybe even wish for more snow."

Consumers are called to visit Busch.com/SnowDay to check how much snow has fallen in each participating state between January 1 and March 28. In order to get their rebate, they must upload an image of their receipt for Busch beer onto the site along with their zip code. Rebates will be sent out on March 28th after the total snowfall of the season is measured. Participants can earn up to $15 in rebates that are paid through an Anheuser-Busch prepaid Mastercard or Anheuser-Busch prepaid virtual Mastercard. The promotion is limited to one submission per person.

"We like campaigns that are situated this way due to their long duration and the rolling nature of redemptions," said Blake. "While fans in Colorado may be swimming in discounts, fans in Pennsylvania will be eagerly awaiting their first snow of the season. This provides our fans a great way to interact with one another on social, and gives us ample opportunity to leverage national forecasts, identify markets to engage, and realize when/how to add a special campaign bonus. This type of campaign is personal for our fans based on their experience with snow in their home state, and gives each state nationwide something to rally behind."