Budweiser has launched a Dry January campaign to promote its new non-alcoholic beer Budweiser Zero. The effort centers around “Team Zero,” a group of coaches and athletes from the US, UK, and Canada, who are sharing inspirational messages to help consumers stay committed to their New Year’s resolution not to drink this month. 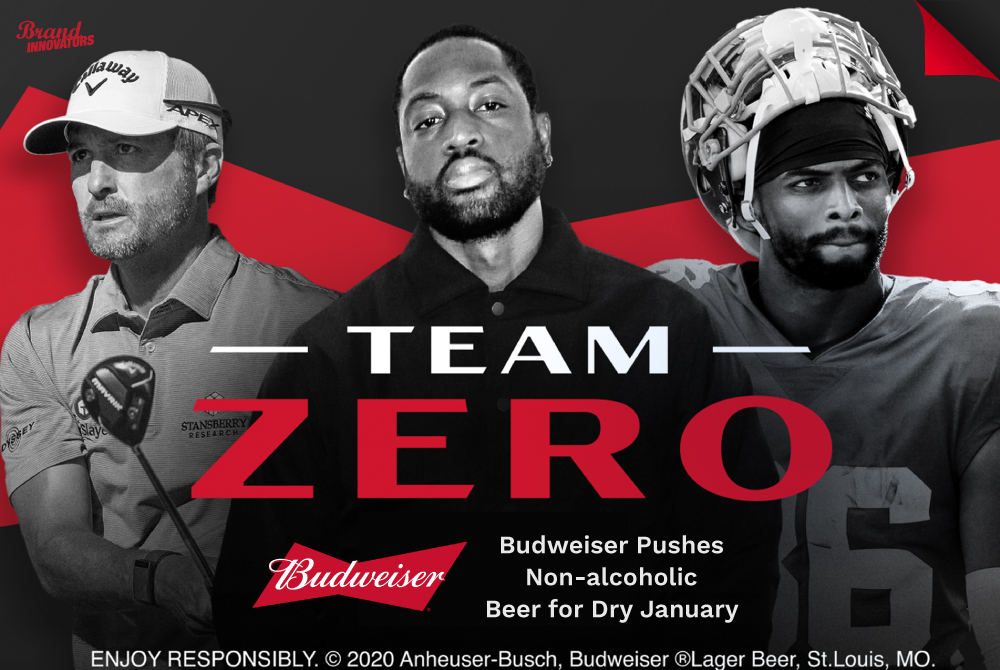 AB InBev has kicked off a new campaign to promote its non-alcoholic beer brand Budweiser Zero during Dry January, with a campaign that calls consumers to team up to stay sober.

Budweiser has formed “Team Zero,” a group of coaches and athletes from the US, UK, and Canada, to help consumers stay committed to their New Year’s resolution not to drink this month. The idea is to help keep each other motivated through January.

“As we look to the start of a new year when people are setting new goals, many also set the tone for the year to come by participating in Dry January,” said Monica Rustgi, VP of Marketing at Budweiser. “We wanted to showcase Budweiser Zero as a way people can still pursue this new year goal without giving up the taste of beer and the celebratory occasions that come at the top of the year.”

“We wanted to put a twist on the traditional new year trend of Dry January,” she continued. “Every year, thousands of people take this month as an opportunity to reset and establish new goals and ambitions before taking on the new year; However, it’s always easier to accomplish with a group.”

Dry January began back in 2014 in the UK inspired by an employee at Alcohol Change UK recounted her experience getting better sleep and losing weight while staying sober in January to prepare for a race. The first year, 4,000 consumers committed to spending the first month of the year on the wagon. It has taken off ever since. Last year, almost 4 million people joined. This year, the group predicts 6.5 million people will join, especially as consumers look to break last year's bad habits.

Consumers that participate in “Team Zero” will receive motivational emails, discounts, and rebates to purchase Budweiser Zero throughout the month.

“Budweiser Zero is providing a new option for consumers, promoted by our community of athletes from around the world. Team Zero helps those who still want to enjoy the taste of beer while committing to sobriety in January,” Rustgi said. “We have a long history of partnering with sports teams, leagues, and athletes around the world and further integrating Budweiser Zero into these teams provides their fans with a new alcohol-free option and a new way to think about Dry January.”

Consumers will also have the opportunity to enter sweepstakes by submitting an online entry form at JoinTeamZero.com and following @BudweiserUSA on Instagram. Participants are encouraged to share their #TeamZero status on social media. Doing so will enter them into a sweepstakes with a grand prize of two tickets to the 2021 World Series Game.

The company is promoting the campaign across Budweiser social channels with Budweiser Zero teaser videos and imagery with the Team Zero athletes. “The posts will also drive consumers to the JoinTeamZero.com website, where they can sign up to be part of the team,” said Rustgi. “The athletes part of Team Zero, including Darius Slayton and Kevin Kisner in the U.S., are sharing their involvement on their own social channels. We’re also running trade programs and sales promotions with key retailers as we continue to build distribution for the brand.”

Budweiser Zero is AB InBev’s first zero-alcohol product. It launched in July through a partnership with basketball player Dwyane Wade. The idea was to offer a beer option without the impact of alcohol, particularly for athletes in training or playing in a season. The product was inspired by consumer demand.

“We have seen dozens of new alcohol free beverage options come to market recently, with non-alcoholic beer beverages quickly rising in popularity,” Rustgi said. “With Budweiser Zero, our goal is to destigmatize zero-alcohol products with a new option that fits into mainstream culture. By using our iconic Budweiser brand, we’re offering a product that does not compromise taste or experience, but rather creates more options for those who prefer reduced alcohol or zero-alcohol options during every moment that beer can be enjoyed.”