Brands at The Oscars

Brands are preparing TV ads and digital activations as they gear up for the Oscars, even though viewership is expected to dwindle. 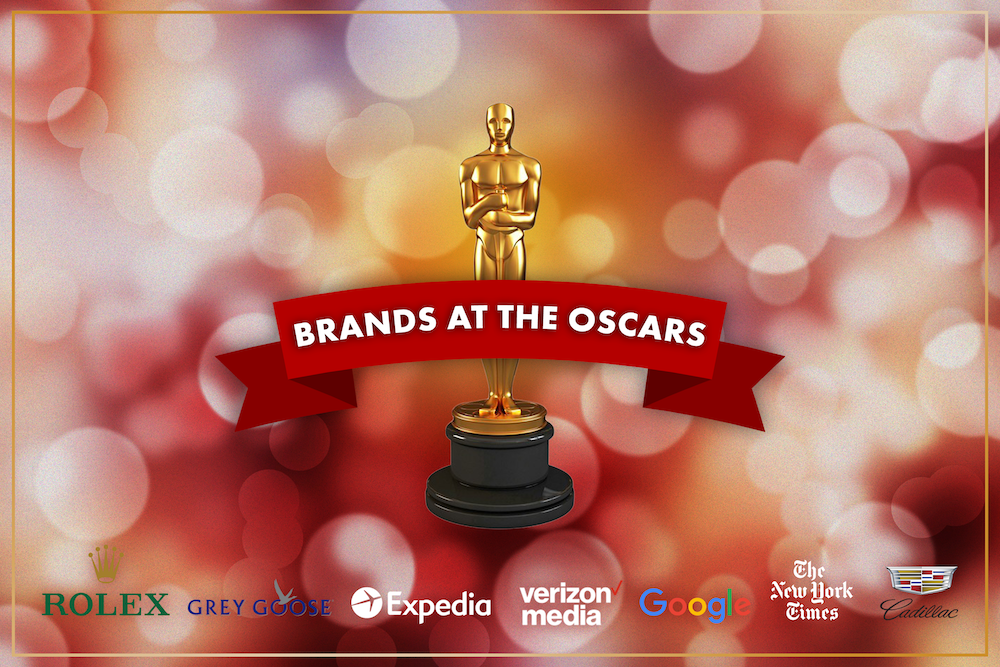 Brands are preparing TV ads and digital activations as they gear up for the Oscars, even though viewership is expected to dwindle. With strict COVID rules in place, limits on attendees and two locations to support social distancing, the show will go on, both in person and via Zoom, in a hybrid 93rd annual Academy Awards ceremony.

ABC is reportedly charging $2 million for a :30 second ad during the Oscars’ broadcast, down from the average $2.15 million last year, as audiences have decreased at awards shows over the past couple of years. Last year, the live show had an average of 23.6 million viewers, representing a 20% decline over 29.5 million viewers in 2019, per Nielsen. Still, the event generated an estimated $150 million in ad revenue, up 13% per Kantar Media.

Verizon will be present throughout Sunday evening’s events, offering 5G-powered portal experiences to those on-site and viewers tuning it at home. The brand will be using its fast speed service to provide backstage footage and press room footage through their social media channels and their website at verizon.com/5Gportal. The brand has also purchased a series of spots during the broadcast. The ads feature Verizon customers including teachers, first responders, small business owners, and families that have relied on Verizon during the pandemic.

Expedia will be using the stage to launch its first global creative brand campaign in years. The ad stars actresses Rashida Jones and Naomie Harris and highlights Expedia as the ideal travel companion. “Like a great companion, Expedia has your back throughout your journey. It matters who you travel with,” says Rashida Jones in the voice over.

As global lockdowns have fostered a deeper consumer connection with movies, Expedia believes in the importance of the awards event.

“Movies and the storytelling of film has been such an important part of what has gotten us through the last year by allowing us to experience culture as a substitute for experiences,” said Chandreyi Davis, VP Brand Marketing at Expedia. “We have gotten to escape and reset through this immersive storytelling. So using that moment as a jumping off point, this is an emotionally led-cultural moment, which has been an important place for travelers over this past year.”

GM brand Cadillac will be running a spot during film’s biggest night to unveil its new electric crossover vehicle: LYRIQ.

“Cadillac has a rich history with the Oscars, and this year will mark an eight-year tradition of launching new products or brand campaigns during the event, which is the most-viewed awards show telecast globally,” said Melissa Grady, CMO of  Cadillac. “We’re excited as we know this year’s event will truly be unlike any previous Oscars. The Academy’s, ‘Awards-show-as-a-movie’ approach will feature an ensemble cast, be broadcast from multiple locations and tell stories from some of the greatest storytellers in the world. Though this year’s event looks quite different, that uniqueness is a great opportunity to introduce Cadillac’s first electric crossover vehicle, LYRIQ.  The Academy Awards share Cadillac’s values of celebrating hard work and creativity, and we felt this was the perfect stage to officially launch LYRIQ, which will pioneer and light the way for the brand’s all-electric future.”

Google confirmed plans to run two spots on Sunday night, both produced by their in-house Google Brand Studio. The first, “A CODA Story” tells the tale of Google designer Tony Lee, a Child of Deaf Adults (CODA). The story details the challenges faced by many deaf and hard of hearing adults during the pandemic and promotes Google's products such as Live Caption and captioning in Google Meet.

"Google is committed to making sure disabled people are represented in the work we do, and the stories we tell,” said KR Liu, Head of Brand Accessibility, Google Brand Studio, in a statement. “The deaf and hard of hearing community have contributed tremendously to our innovation at Google. Now more than ever, technology is helping us stay connected and allowing us to support each other through important life moments."

Rolex will design the green room for the event as they typically do. Vanity Fair is hosting a virtual party open to the public, sponsored by Grey Goose. The brand is also using a pre-show party to debut a new line of fruit-infused vodkas.

Advertisers that have sponsored prior Academy Awards – including McDonalds, Kinder Chocolate, Heinz Ketchup, and Stella Artois – confirmed to Brand Innovators that they will not be participating this year. The New York Times will not be advertising this year but did note that they were nominated twice – once for “Time” in Best Documentary Feature and in the category of Documentary Short Subject for “A Concerto Is a Conversation.”

While COVID has cancelled the in-person parties and some of the beverage brand sponsorships, guests will still receive traditional gift bags loaded with swag from brands, which Forbes estimates is worth $205,000 in goods and services. Distinctive Assets, the company responsible for the gift bags for 19 years running, will deliver the “Everyone Wins” Nominee Gift Bag to nominees for Best Actor, Best Actress, Best Supporting Actor, Best Supporting Actress, as well as the Best Director categories.

The bag includes a four-night stay at Golden Spa, NFT artwork, a coupon for a plastic surgery procedure, and a Postmates Don’t Cookbook, which includes a QR code for a free delivery from local restaurants in lieu of recipes. An Instagram post from just one of these influential professionals could be worth the investment.