Walgreens Boots Alliance’s beauty brand No7 has kicked off a new global campaign aimed at inspiring women to return to the workplace during these challenging times. The Unstoppable Together campaign came about in response to the fact that women are leaving the labor market at 4x the rate of men, a recession that disproportionately impacts women. 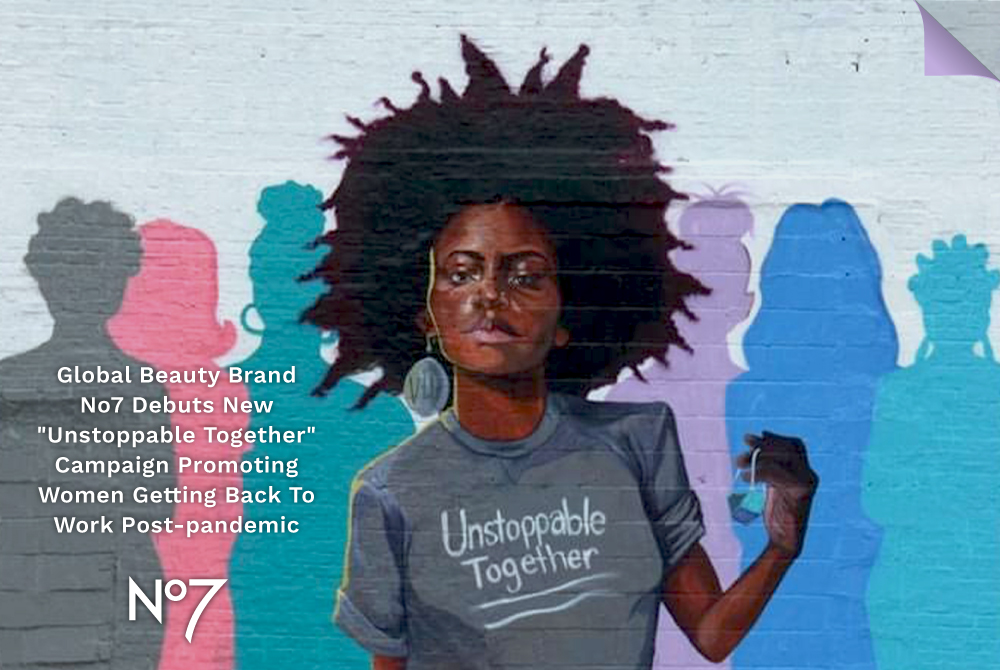 Walgreens Boots Alliance’s beauty brand No7 has kicked off a new global campaign aimed at inspiring women to return to the workplace during these challenging times.

The Unstoppable Together campaign came about in response to the fact that women are leaving the labor market at 4x the rate of men, a recession that disproportionately impacts women (including a sobering report from December 2020) and a trend driven by women leaving their jobs to educate their children and take care of loved ones during the pandemic.

No7 wants to break this “SHEcession” by partnering with organizations and individuals that support women’s career advancement and provide them with the tools they need to rejoin the workforce. Unstoppable Together’s core mission shares its roots with the longtime mission of No7, which has been empowering women in the UK for decades but only recently launched in the U.S. when the Walgreens Boots Alliance was established at the end of 2014.

“We stand for women helping women, this idea that we're all stronger together, and we’ve been doing this since the birth of the brand,” said Anisha Raghavan, Chief Marketing Officer, Global Brands Americas at Walgreens Boots Alliance. “It’s an extension of No7’s 87-year history of being an ally to unstoppable women. You see it in our approach to advertising, primarily featuring real women with no retouching, our longtime support of women stopped in their tracks by cancer in the UK.”

The new campaign features iconic women including Arianna Huffington, Maria Shriver, Tamron Hall, and Dr. C. Nicole Mason of Institute for Women’s Policy Research (IWPR) among others, who will share inspiration and ideas to help women reenter the workforce. This is the first time the brand is activating on its brand purpose in the U.S.

Video Credit: No7 Unstoppable Together film created by Berlin Cameron and VMLYR

The program is three-fold. First, the brand has released a new female-produced film to raise awareness about this “SHEcession” by featuring celebrity ambassadors to help spread the word. Then on February 22, No7 will host the free virtual Unstoppable Together Job Summit, in which iconic female speakers will give inspirational talks, in partnerships with Fortune, Hello Sunshine and The Female Quotient. Additionally, the event will include free coaching sessions from The Female Quotient on themes such as interview skills, pivoting careers and rewriting your job loss story.

“Every one of our partners is known for their work championing women, which was really important,” said Raghavan. “For example, Ariana Huffington, who helped empower women in the workplace, and Maria Shriver, who shepherded groundbreaking women in the workplace studies. Tamron Hall, who demanded ABC hire all women for her talk show.”

The brand hopes that these influential women and the film’s eye-opening content will be powerful enough to spread the word virally. Instead of doing paid media, they are focusing on social media and influencers to drive awareness and event registrations. “We really believe in the power of the influencers and the people we have involved to get the word out,” said Raghavan. “Our hope is that consumers will come along for the ride and share as well.”

Additionally, the brand has created a microsite at no7beauty.com/unstoppable where consumers can hear more stories and register for the event. The objectives of the campaign are event attendance, but the broader goal is to simply raise awareness and inspire women to go back to work.

“What we want to accomplish number one is awareness that the ‘SHEcession’ is happening and what that means for the workforce, and number two getting women back in the workforce,” said Raghavan. “How widely the summit gets attended and the film gets viewed are some of our measures of success. While we can’t force people to share whether they get back to the workforce, we’ll measure the number of attendees, number of people who took advantage of our coaching summit, and our hope is to continue engaging in the stories of these women and getting to know them.”

“We genuinely believe this movement will lead to positive change in terms of helping women get back to work and our hope is that people will join us in the movement,” she added.

Dianna Dilworth and Andrew Hampp contributed to this story.