Anheuser Busch has launched a new marketing campaign that encourages safe and responsible drinking in a humorous digital video campaign that honors bartenders in a year of shuttered bars. 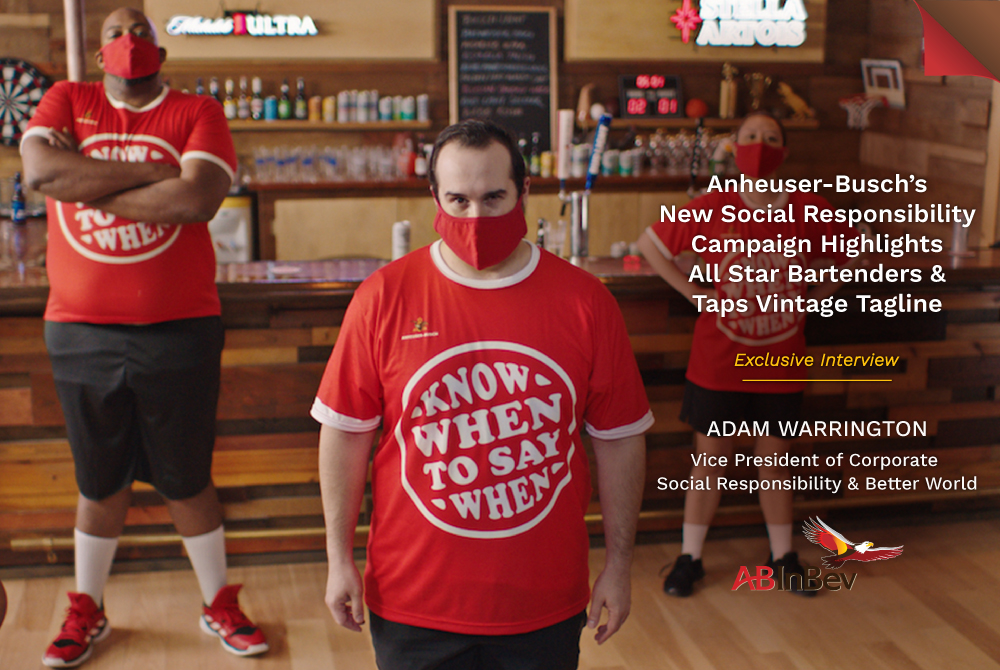 Anheuser Busch has launched a new marketing campaign that encourages safe and responsible drinking in a humorous digital video campaign that honors bartenders in a year of shuttered bars.

The campaign nods to the beverage company’s original “Know When to Say When” campaign, the company’s first major responsible drinking campaign from almost 40 years ago.

“We wanted to tap into the nostalgia of our original 1982 campaign, keeping the same important message around moderation, all with a modern setting showcasing today’s new normal,” said Adam Warrington, Vice President of Corporate Social Responsibility & Better World at Anheuser-Busch.

Anheuser Busch has been tapping its vintage for ad campaigns for various brands this year, perhaps a nod to 1980s and 1990s nostalgia, as well as a way to offer comforting messaging during a challenging year.

For instance, Bud Light rebooted its classic 1990s “Genius ads” with a new shelter-in-place twist in a series of "Stay At Home Humans of Genius" spots. Additionally, Budweiser ran a campaign with The Salvation Army in April that encouraged people in lockdown to reach out to friends if they are feeling isolated. The ad resurrected the brand’s iconic 1990s "whassup" tagline as an icebreaker for deeper conversations about mental health during the pandemic.

“After seeing the reception to the recent Budweiser Wassup campaign retrofitted to today’s realities, we wanted to take on a similar approach with a timeless message that still rings true regardless of the year,” Warrington said.

The new campaign will be supported with a robust digital plan, launching with a :60 digital spot followed by :30 and :15 second cut downs for social. The ad elevates the job by celebrating the positive and healthy role that these individuals play in people’s lives beyond just serving drinks. The video ad spotlights bartenders and hospitality workers at a time when many have been struggling with unemployment and those that have been able to work, risk exposure to the coronavirus. The ad celebrates these servers with a playful sports theme that awards the All Star role that three bartenders earned in helping clients “Know When to Say When.”

“We wanted to spotlight the hardworking bartenders and hospitality workers across the country who look after us and often become an essential part of our lives over the years,” said Warrington. “The idea behind the sports highlight format is to showcase bartenders and industry professionals as the all-stars they are, looking out and keeping us safe regardless of the circumstances.”

This has been a challenging year for beer sales, as the closure of bars and restaurants and the cancellation of summer concerts and sporting events have hurt sales. Anheuser-Busch InBev reported a 17.1% decline in second-quarter volume and a 17.7% decline in revenues. However, revenue declines have been fading progressively each month as restaurants and bars reopen and at home sales remain strong. As bars begin to reopen, the beer brand wants to encourage people to go out and drink beer to help support these business partners.

“On-premise sales are a key part of Anheuser-Busch’s business and we want to support bars opening appropriately and safely,” Warrington said. “Just as we want consumers to drink responsibly, we hope that bars and restaurants will be able to re-open and serve in the same manner.”

Anheuser-Busch is the exclusive alcohol partner of the National Restaurant Association’s Restaurant Revival Campaign and its ServSafe initiative, which is aimed at giving consumers confidence in the safety measures undertaken by the restaurants in preparing their reopening, including staff training, food safety, employee health-monitoring and social distancing guidelines.

This latest Anheuser-Busch “Know When to Say When” spot, the company adds social distancing to its messaging around responsible drinking which also focuses on hydration, eating and not driving while drinking.

“We’ve always incorporated messaging around hydration and planning ahead for a safe ride into our responsible drinking campaigns,” Warrington said. “For this spot we took a show-not-tell approach to safe socialization as it concerns today’s environment. The idea was to show bars in their most realistic and safest state as a reminder for the many considerations bartenders and on-premise industry take when serving and encouraging safe practices with their customers.”

The campaign also aims to play up the return of televised sporting events that has been picking up over the last several months. Even though stadiums are closed, consumers can still enjoy games and watch them while drinking beer.

“We aren’t letting the lack of fans in the stands impact our presence in sports,” Warrington said. “Through our amazing brands, we have quite a few examples of how we’re keeping fans entertained in our new normal. My favorite example is through Michelob ULTRA Courtside, we’re offering a first-of-its-kind digital experience that virtually brings fans inside the arena during NBA games.”