Advice on How to Modernize Your Brand from Dell, Unilever, KFC & Northwestern Mutual

Legacy brands have the advantage of well-established names and consumer recognition, but sometimes they come with a cost of appearing old in an era of startups and shiny new DTC brands. 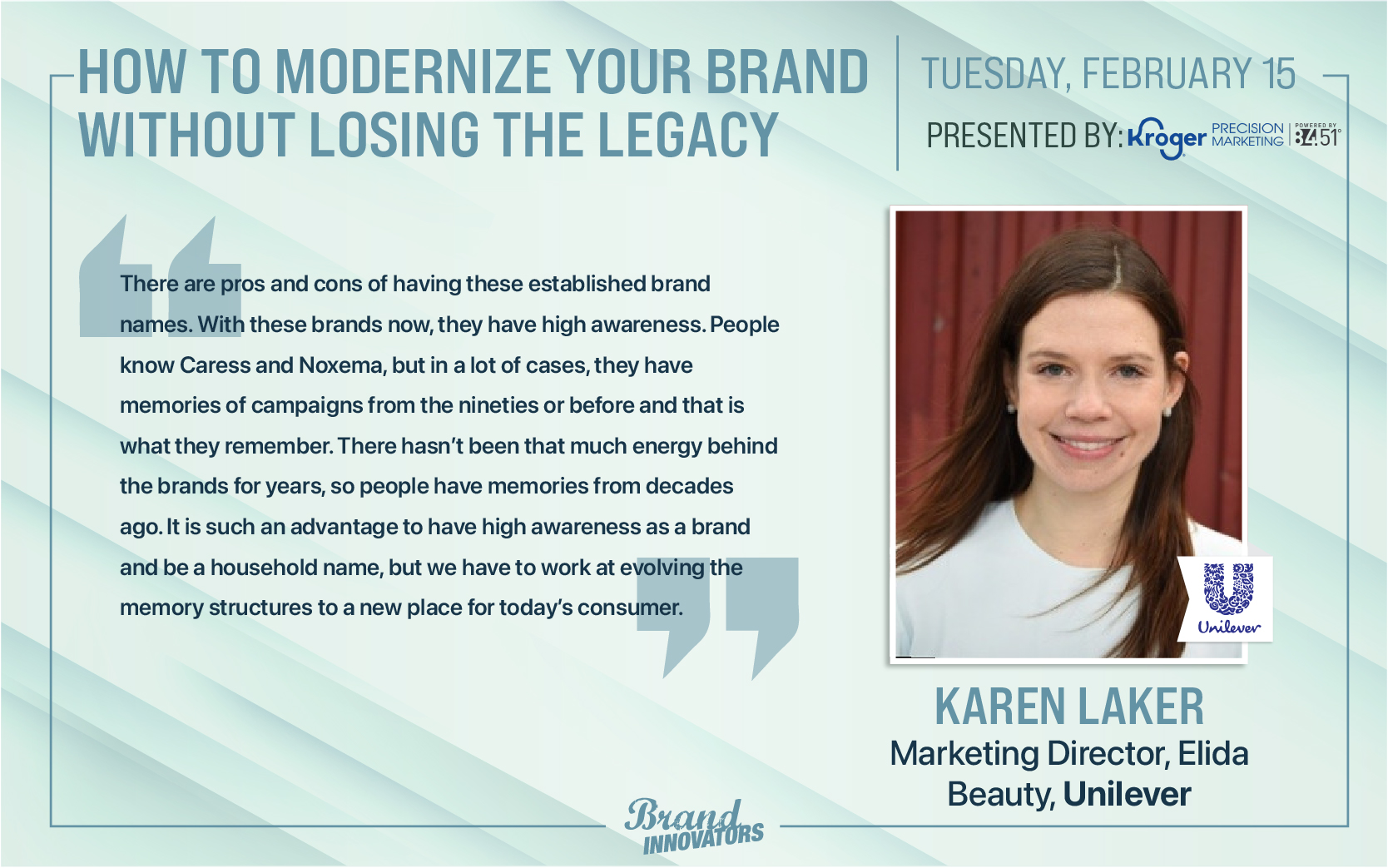 Legacy brands have the advantage of well-established names and consumer recognition, but sometimes they come with a cost of appearing old in an era of startups and shiny new DTC brands.

At a recent Brand Innovators livecast on How to Modernize Your Brand, executives from leading brands including Unilever, Dell, Northwestern Mutual and KFC talked about how to keep a contemporary perception at a heritage brand.

“There are pros and cons of having these established brand names,” said Karen Laker, marketing director at Elida Beauty, Unilever. “With these brands now, they have high awareness. People know Caress and Noxema, but in a lot of cases, they have memories of campaigns from the nineties or before and that is what they remember, So there hasn’t been that much energy behind the brands for years, so people have memories from decades ago. It is such an advantage to have high awareness as a brand and be a household name, but we have to work at evolving the memory structures to a new place for today’s consumer.”

When Dell merged with EMC about six years ago in one of the biggest mergers in technological history, the brand has to determine how it wanted to show up in the world.

“Dell is not likely what you think Dell is today. A lot of times when you hear the word Dell, you think ‘Dude you are getting a Dell,” for those that came of age in the early 2000s or you think of the computer, a laptop,” said Rachael Henke, senior director, brand & B2B campaigns at Dell Technologies. “What we are trying to do is have a “yes, and” conversation about our brand. About six years ago, Dell and EMC merged. It was the largest technology merger in history. One of the things that really became special about that is when we merged we had to make this distinction of how do we show up?”

What came out of that is a new name called Dell Technologies, which brings the legacy of computer technology and brand name into it, but also encompasses the many additional things the brand does such as storage, servers and cloud computing. “The challenge is how do we talk about the brand that carries a key legacy and expand that perception,” Henke continued.

When Whitney Magnuson, senior director, social marketing at Northwestern Mutual tells people she works with influencers, they are usually pretty surprised, wondering how influencers can show off something boring like financial planning. But the company’s strategy is actually quite

“When we work in social and we do things with influencers, we are seeing comparable – or even better in a lot of cases – impacts in our high level awareness, consideration and brand health metrics, as compared to other more traditional channels,” said Whitney Magnuson, Senior Director, Social Marketing, Northwestern Mutual. “ It drives consideration for us at a much much higher rate than traditional linear TV, for example, which is kind of surprising because you think of the amazing reach of something like linear TV but with influencers we are able to just make that really strong impression because people who are already following that influencer already have that established trust and it just really breaks through even more than traditional channels.”

Tori Carter, brand + creative at KFC Global, has a pretty tall order. Her job is to create a unified experience of how the brand shows up across markets. She says it is all about the magic of franchisees.

“My job is to really make sure that heritage part of the brand, the stuff that we know works back to the beginning, brand 101, that we know is a part of who we are no matter where you show up in the world, so that kind of comes down to our distinctive assets, our global brand positioning,” said Carter. “I think what is critical to the success of showing up as a relevant brand in all of the different markets that we operate in is that really strong partnership with our franchisees as well as the local business units across the world that partner directly with those franchisees.”